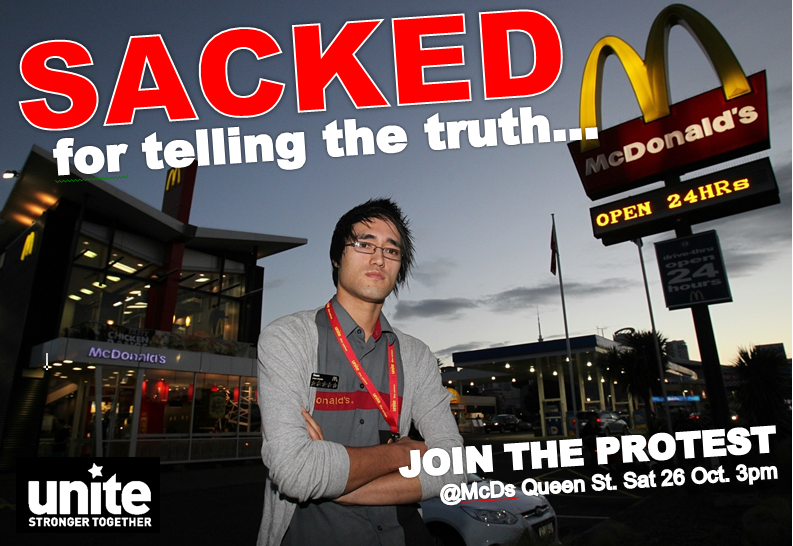 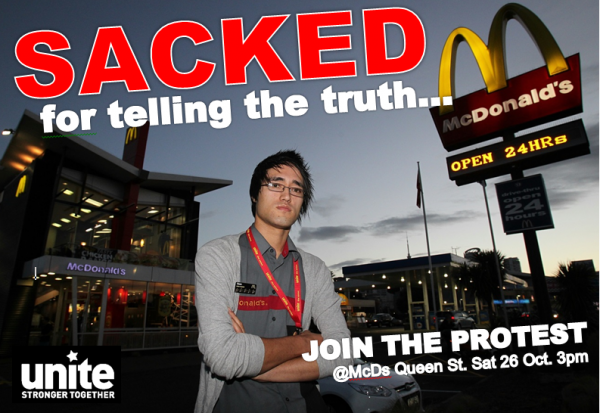 McDonald’s has sacked Unite Union delegate Sean Bailey for exposing serial law breaking by the company over not providing meal breaks for many staff working more than a four-hour shift as mandated under the current law.

Sean Bailey drew international attention earlier this year during Unite Union’s “McStrike” campaign for a new collective agreement after he alleged he had been subject to systematic anti-gay discrimination.

Among the several disciplinary charges brought against Sean in the last few weeks was one for comments criticising the company’s breaks policy before a parliamentary select committee into proposed employment law changes.

Unite had written to the select committee to ask if McDonald’s had committed a contempt of parliament by bringing charges against Sean Bailey for what he had said at the select committee. The disciplinary letter issued to Sean over the matter said: “It appears that what you have said during the course of the select committee hearing and doing so in uniform may give rise to breaches of your obligations to your employer.”

Parliament’s Standing Orders prohibits “… Threatening or disadvantaging a person on account of evidence given by that person to the House or a committee”.

On Thursday last week the select committee decided to write to McDonald’s to express their concern.

Sean appeared before the select committee on September 11. On September 17 he received a disciplinary letter alleging he had accessed wage and time records in late April for staff in his store and made them available to the union. The company had held on to the information in support of their allegation for five months until after Sean had appeared before the select committee and the dispute over the collective agreement had been concluded before bringing the disciplinary charges.

The company followed this letter up with another dated September 27 with charges relating to his appearance before the select committee.

The company indicated to us last week that they wanted to proceed with the complaint over accessing wage and time records before considering the charge over the select committee appearance. We argued that we did not think that it was appropriate to separate the issues and we needed to consider the gravity of the aparrant contempt of parliament and its legal implications. In our view the company had joined the issues and they could not be unilaterally separated.

In the end the company simply proceeded with the disciplinary meeting in Sean’s absence on their preferred charge. They did this without confirming with us that that was what they intended to do so rather than simply their preference.

McDonald’s is currently subject to a legal action by Unite Union over failing to provide 30-minute meal breaks for many shifts of more than four hours.

Unite had discovered that the breaches of the law have been routine. The company had been claiming to the union that they were not able to provide us with wage and time records that included breaks taken.

We asked our delegates to check if this was true. We were able to get information from a number of stores to prove that the company claim was not true so we formally wrote and asked for that information for all our members as is our legal right.

The then national “Director of HR and Talent” for McDonald’s Lauren Voyce responded in an email by simply repeating the lie that McDonald’s “does not record employees taking breaks”. Sean is being sacked for exposing that lie.

If you are naive and think the that major corporations like McDonald’s are not lying, cheating, corporate blood suckers read the complete email from Lauren Voyce (now transferred to McD’s UK I believe). She wrote:

In reference to your email of 1 May requesting wage and time records, the ability to request such records lies with the individual employee. If, in light of the information provided below, you want to pursue those requests, you will need to provide us confirmation of authorisation from each employee.

A couple of things to note:

Our payroll systems do not record employees taking breaks, and as you’ll be aware there is no obligation under the legislation for us to do so. The point is that that records you are requesting will not show whether breaks were taken.

The payroll records for our company owned restaurants are kept by our payroll department in Sydney, and are not available electronically. However they would be made available in hard copy in Sydney for you to inspect. If a request was to be submitted for each of your members covering the period you indicate below, we estimate that the documents would number over 1,000,000 pages and take approximately three weeks to assemble. You will need to let us know what your proposal would be to meet the cost of preparing those documents. If you wanted copies sent to Auckland we would also be looking for your proposal regarding meeting the cost of that.

As for requesting payroll records for members from franchise restaurants, you would need to provide franchisees confirmation of authorisation from each employee. To facilitate, I could send a note to franchisees to let them know you will be in touch to do so.

Not a word of this email was true. Workers at McDonald’s are required to clock in and out for their meal break and the records are kept electronically not in hard copy in Australia.

Once their lie about not having these records had been exposed the company relented and agreed to provide information for members if they had signed specific authorisation forms. We have submitted several hundred authorisations and subsequently received the information for those members which confirmed there have been literally thousands of breaches of the law over the last few years.

“I will fire you for the smallest thing”

It is our belief that the entire disciplinary process against Sean was a pre-determined process to get rid of him because he had been an active delegate and strike leader at the McRush franchise stores during the four month long dispute between McDonald’s and Unite Union.

Laura Thompson, the Business Partner and HR manager for McRush sent a text to Sean in early August saying “You better watch out because I will fire you for the smallest things you do in the store”. 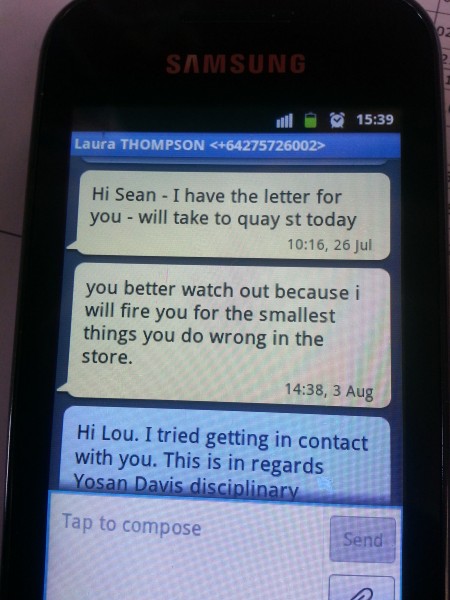 Sean also has a personal grievance against McRush for cutting his hours in an unreasonable and unlawful fashion because of his union role during the dispute.

Video footage allegedly showing Sean printing off the wage and time records was kept for 5 months before being used as part of the disciplinary process. Laura Thompson had previously told Unite that video footage was not kept for more than 2 weeks when we wanted an allegation of sexual assault investigated yet they have managed to produce video footage from the end of April .

It is our belief that McDonald’s deliberately withheld the disciplinary action against Sean until after the dispute between the company and Unite had been settled. In so doing they have removed any pretense that they could claim a loss of trust and confidence as he has been working there continuously for the entire period. It is not good faith practice to collect grievances and then spring them on someone much later rather than dealing with them promptly.

The decision to proceed with the charge appears to have been provoked by Sean’s appearance before the select committee.

We will be campaigning to have Sean reinstated to his job. The dismissal was an outrageous victimisation of a young man for standing up for his rights and exposing corporate bullying and exploitation.

We plan to celebrate Labour Weekend with a protest on Saturday October 26 at 3pm outside the McDonald’s Queen St store in Auckland. An injury to one is an injury to all!