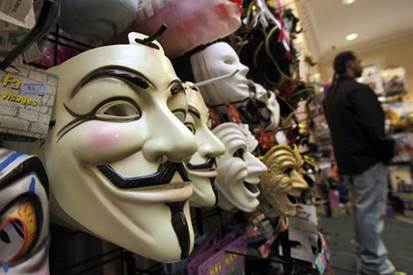 “LET THE ANARCHIST fight the dirty fight”, writes Adam. “It’s what we do best.”  Responding to yesterday’s “Fighting Fire With Fire” posting on The Daily Blog he makes the case for a movement operating outside the norms of bourgeois democracy.

Anarchism’s gift to the Left, argues Adam, is its distance from the world of formal political parties and organizations. Anarchists operate at such vast ideological distances from the traditional institutions of the Left that the latter are able to plausibly deny any association, or sympathy, with their ideas. Or, as Adam puts it: “we are outside your political parties and organizations – you can’t be tarred with the same brush”.

In the final quarter of the nineteenth century anarchism became a by-word for extreme political violence. The popular notion of the anarchist as a bearded bomb-thrower or assassin dates from this time. The association is pardonable, and hardly surprising, given the number of incidents in which Emperors, Kings, Presidents and Prime-Ministers fell victim to the bombs and bullets of anarchist cells committed to “the propaganda of the deed”.

Not for the anarchists the patient building up of trade unions and socialist parties. They looked at the German Social-Democrats – a party legally debarred from ever assuming the reins of power – stoically soldiering on, even though, with every passing year, it was becoming more and more bureaucratic, sclerotic, and intolerant of anything that smacked of practical – as opposed to theoretical – revolutionary fervor.

Why waste all that time fighting elections you can never win, when one well-thrown bomb, one well-aimed bullet, can remove from the scene a political leader the ruling-class can ill-afford to lose, and who they can only replace with the greatest difficulty and disruption?

It was hard to argue against the beneficial political consequences that flowed from some of these anarchist outrages.

For example, when the anarchist, Leon Czolgosz, shot the US President, William McKinley, at the Pan-American Exposition in Buffalo, New York, on 6 September 1901, he set in motion the sequence of events which led to McKinley’s Vice-President, Theodore Roosevelt, becoming President of the United States. Roosevelt belonged to the progressive wing of the Republican Party (yes, there once was such a thing!) and let loose the political forces which would, for the first time in American history, attempt to put a regulatory brake on the worst excesses oflaissez-faire capitalism.

Unfortunately, the opposite was also true. Anarchist outrages could just as easily lead the ruling-class to retaliate by unleashing a full-scale repression of the Left.

When a frankly terroristic anarchist cell launched a synchronized assault on the administration of President Woodrow Wilson and other members of the American ruling-class on 30 April and 2 June 1919, the United States Government’s response was vicious. It authorised a wholesale attack upon the American Left that saw hundreds of union organisers, socialist politicians, progressive journalists – as well as many leading anarchists who had nothing to do with the attack – rounded up and jailed. Many were tried under the 1918 Espionage Act (the same law that sent the Wikileaks whistleblower, Private Bradley Manning, to prison).

Organised by the US Attorney General, Alexander Palmer, the so-called “Palmer Raids” were coordinated by a young, ambitious Justice Department official called J. Edgar Hoover, who went on to become the founding director of the Federal Bureau of Investigation.

Essentially the US Government’s political police force, the FBI spent the next sixty years surveilling, disrupting and (when possible) prosecuting the entire American Left. Practically every progressive movement in recent US history, from the Congress of Industrial Organisations to the National Association for the Advancement of Coloured People and the Black Panther Party was made to suffer for the actions of those anarchists in 1919.

So, you’ll have to forgive me, Adam, if I decline your kind offer to do the things that moderate old lefties like me dare not do.

To be sure, there are a few people I can think of who might benefit from a well-aimed bomb or bullet; and its possible that the latter could open the way for a style of politics that would never flourish otherwise; but the judgment of history, when it comes to anarchists “fighting the dirty fight”, is very clear.

Those who benefit from violent political interventions, even when they are not responsible for them, will always find themselves tarred with same brush as the people who are.

History also suggests that citizens are seldom convinced by bomb-throwers, and that the long-term benefits of the ballot almost always outweigh the short-term effects of the bullet.