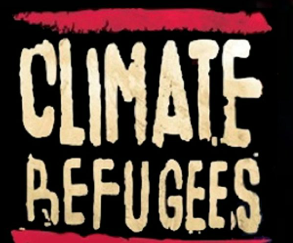 This morning, in Court 10 at the High Court in Auckland, the Hon. Justice Priestley will hear argument in the case of a citizen of Kiribati versus the Ministry of Business, Innovation and Employment, seeking leave to appeal an Immigration and Protection Tribunal Decision that he and his family should be sent back to Kiribati. Not that you’d know that, if you were following the New Zealand media. The most recent coverage of this case is at the Wall Street Journal, a US paper not noted for its coverage of climate issues — but that’s what this case is all about. The appellant is arguing that he should be allowed to stay in New Zealand and not return to his home island because it is disappearing beneath the rising seas. He is a climate refugee, he claims, and so seeks refugee status.

It seems unlikely that the man’s case will succeed, according to immigration law experts consulted by the Associated Press, but the idea — that climate refugees are knocking at New Zealand’s door — is one whose time has come. A couple of weeks ago, the Intergovernmental Panel on Climate Change released the first part of its 5th Report (summary for policy makers here, full report draft here), and projected that without action to reduce emissions sea level could rise by almost a metre by the end of this century — and carry on rising thereafter. The low-lying islands of the Pacific are under pressure already, as king tides wash into their townships and sea water infiltrates their water supplies, and long before the end of the century thousands of families are going to be displaced as their homes become unliveable.

Migration — whether forced or economic — is already a major issue around the world. Whether it’s boat loads of people heading to Australia or Europe, we are already experiencing the first phase of what will become a tidal wave as climate change bites. Rising seas and storm surges threaten to drive hundreds of millions of people in the low-lying river deltas of Southeast Asia off their land. National borders mean little when simple survival is your only goal. Many more Pacific island communities will be under threat and knocking at our door. Yet the New Zealand government believes that its watered down and ineffective emissions trading scheme is a credible response to the horrendous consequences of unchecked warming. It seems keen to ignore the issue as much as possible — to the extent that no government minister could spare the time to talk to Dr Thomas Stocker, joint chairman of the IPCC’s working group one report when he visited NZ last week.

The IPCC’s message, and that of the Kiribati refugee are all too clear. Unless we take urgent steps to cut emissions, and start planning for a world changed by the warming and take account of the geopolitical impacts of certainties like sea level rise, we will face tough times. Action now will make the future for everyone less bad. That’s the best we can do, and the least we can do if we want to do more than pay lip service to humanitarian principles.