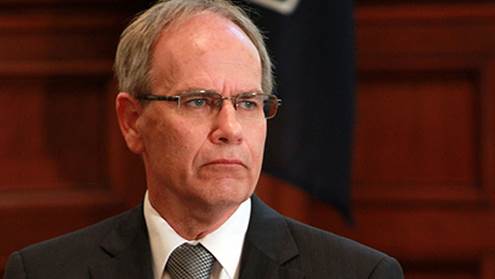 MAYOR LEN BROWN has made the transition from people’s champion to safe-pair-of-hands. Three years ago he was swept into office on the seldom-cast votes of the marginalised and excluded citizens of South and West Auckland. Last Saturday he was re-elected: securing fewer than half of the votes of barely a third of Auckland’s eligible electors. The strongest testimony to the safety of Len Brown’s hands? That the Right saw no compelling reason to run a serious candidate against him.

With the benefit of hindsight it is possible to see Len Brown’s at least nominal allegiance to the Labour Party as being much less about principle than it was about selecting the path of least resistance to political power. To the professionally-qualified but ideologically tepid man or woman harbouring large ambitions, Labour offers a much less exacting means of social ascent than navigating the complex networks of power which New Zealand’s “old money” has spent the best part of 150 years constructing.

This has been especially true since the early 1980s when Labour’s ambitious young president, Jim Anderton, oversaw the social transformation of the Labour caucus by selecting young, upwardly-mobile urban professionals to carry Labour’s banner in the marginal parliamentary seats. Socially wet, but economically dry, these MPs became Roger Douglas’s most willing accomplices in the wholesale destruction of Old Labour.

Following the election of the Fourth Labour Government in July 1984, this new breed of Labour activist delighted in deluging conference delegates with pamphlets urging them to “Join the Yuppie Revolution – or get left behind!” The party of the trade unions was said to be passing into history; the political future belonged to those who could practice the fluid politics of identity while simultaneously applying the inflexible formulae of the free market. A young, up-and-coming lawyer like Len Brown could join this sort of Labour Party without hesitation.

Len Brown’s political style combines the volatile (and often conflicting) demands of identity and marketplace with great skill. In some ways that makes him the last (and arguably one of the more adroit) of the 1980s Rogernomes. Certainly his conduct as Auckland’s Mayor: his refusal to back the Maritime Union in its battle with Ports of Auckland; his “neutrality” in relation to the Glen Innes evictions; and his open disdain for the more traditional leftists on the Auckland City Council; all point to a man who is much more neoliberal than he is social-democratic.

The next three years will test Len Brown’s political skills to the full. Increasingly, the Labour Party and the wider labour movement are abandoning the ideological inertia of the Clark Era for a much more overt and aggressive restatement of social-democracy. Brown’s “centre-left” persona will thus become less and less convincing as his political alliances and economic decisions identify him more and more as a politician of the centre-right. Should a David Cunliffe-led Labour Party win the 2014 General Election, the Auckland Mayor’s lack of ideological sympathy with the incoming regime will be difficult to hide.

A Labour-Green coalition government determined to do more than talk about housing the poor may not find the private developer’s charter that Brown’s Unitary Plan represents at all equal to the challenge of placing thousands of low-income families into well-designed, well-constructed and affordable accommodation. The extreme neoliberal ideology which informed the constitutional design of the Auckland super-city may similarly be deemed unequal to the scope and urgency of the other big changes Auckland must undertake. Rather than presenting himself as the man in the vanguard of the city’s infrastructure development, Brown may find himself running to catch up with a central government unwilling to see Auckland’s development stymied by the neoliberal diehards running Auckland’s CCOs.

The big question that Brown must, therefore, answer is: What kind of leader will he be when politics can no longer be “left at the door”?

In that signature, and very telling phrase, all of Brown’s essential conservatism; all of his unspoken devotion to thestatus quo; and all of his determination to govern not according to the dictates of principle – but through the judicious use of patronage – comes shining through.

While the reactionary precepts of neoliberalism remain enthroned in Auckland, Len Brown’s role as its loyal and avuncular major domo is safe. But should the fulfilment of a radically divergent and genuinely left-wing ideological project demand that politics not only come across the threshold of local government but also take its rightful place at the council table, then Mayor Brown’s avuncular mask is likely to slip, and the fiscally and socially conservative family lawyer he has always been will be revealed. At that point the Left – seconded by the new “centre” its radicalism has called into existence, will discover that they have no further use for him.