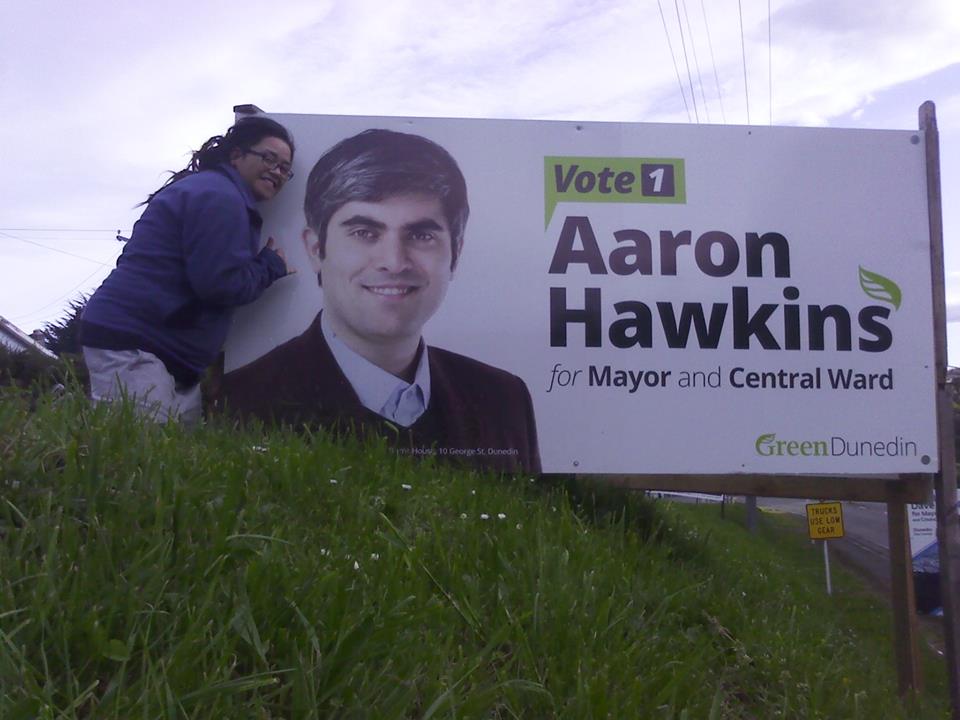 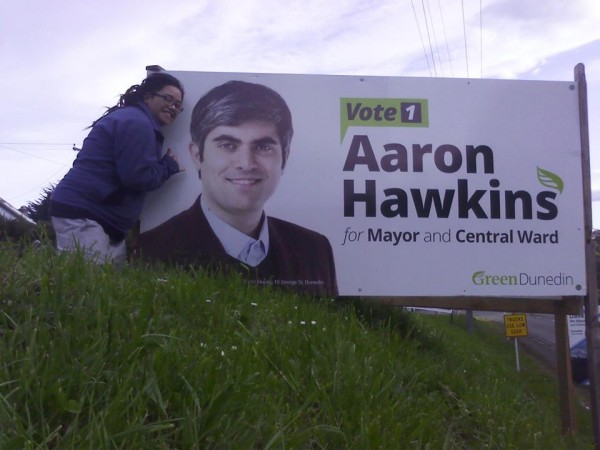 On Friday May 23rd, I announced that I had been selected to represent the Green Party in the Dunedin City Council elections, standing for the Mayoralty and a seat on the City Council. For at least seven or eight months prior, I’d been working my way through the democratic rigor of our official nomination process, selected by consensus by members of our local branch and vetted at a national level. I had considered running again as an independent candidate, and had been approached to consider standing for another local ticket, but I chose to stand for the Greens because I considered it more honest to declare openly the values and principles I believe in, and will fight for if elected. I’d be uncomfortable endorsing other candidates on a ticket that didn’t share those same ideals, particularly around the urgency of addressing climate change, and the short-sighted economic mirage of deep-sea oil drilling.

As anticipated, there was some resistance to the Green Party “meddling”in local body politics. Despite the fact that we were only standing one candidate, it was practically apocalyptic if you were to listen to some of the louder voices in the room. If I had the power to single-handedly make everyone live in caves, I’d be using that gift a little more constructively, but there’s no convincing the heavily blinkered ones, blind to the irony that their peripheral vision is obscured by their own entrenched ideology more so than mine. Recently there’s been a lot of talk, much of it desperate and paranoid, about the dangers of voting for candidates running on tickets in local elections. Greater Dunedin are putting forward 9 council candidates, and that is seen by some as trying to take over the Council completely. The political reality is that this is extremely unlikely, they’d surely admit as much in private, in the same way that United Future had someone at 17 on their party list in 2011 without any realistic expectation of them being elected. The only reason for a candidate to be threatened by them is if they concede to being weaker than the entirety of that grouping.

When I first stood for Council, in 2010, I was bemused by (and probably even slightly guilty of) the bland platitudes and oblique ambitions that plagued many candidates. Who isn’t in favour of transparency, accountability and financial prudence, after all? This time around, I thought I owed it to voters to be a little more specific about what I saw as our challenges and opportunities should I be elected. I know that the Mayor is but one voice, and only ever as many as two votes. There is no ability for them to impose their vision upon the city, but I thought it only fair to lay out what my priority areas were, and put forward suggestions for how we could address them. For more than a year, with the help of wiser minds and cooler heads than mine, I focused on identifying what I see as the great impending challenges for Dunedin, and proposing practical solutions to help deal with them. I made my priorities helping support sustainable jobs, warm and healthy homes and safe, affordable and efficient ways of getting between them. Specific strategies to help renters and homeowners bring their living conditions up to scratch. Ideas that could help create businesses and rejuvenate our flagging Central Business District. Schemes that would help lower the cost of doing business in Dunedin. Committing to fixing our woeful bus service and continuing to invest in smart cycleways, the kinds of things people expect from a 21st Century City.

Unless there is an heroic last minute posting of votes over the next few days, it looks as though turnout across the country is going to be woeful. There is no easy solution to this – I think central government, local authorities and community groups all have a duty to seriously examine how we can turn this around together in elections to come – but the lack of candidates openly and honestly laying out their ambition for their community is one of the worst culprits. One of the big factors in the United States having such dismal voter turnout is that they have a two party state, and voters don’t see them as being fundamentally different enough for their vote to make any substantive difference. I don’t think it is coincidence that as Labour and National have started scrapping it out for the same crop of so called centrist swing voters, rather than differentiating themselves, our general election participation has plummeted. If we are to increase public engagement in our local body elections, we need candidates who are upfront about what they want to do, and local and/or national media who will force them into having an opinion.

Lest it be seen as pre-emptive sour grapes, I mean no disrespect to the journalists and community groups who have gone out of their way to cover the campaign as far as their editors will allow, and organise forums in their communities to meet the candidates. As someone who currently asks questions for a living, though, there were countless occasions over the course of the past few months where I was dying to be in the audience, to seize the opportunity to hold candidates to account. Night after night I heard how we needed to be ‘Open For Business’, ‘Roll Out The Red Tape’, ‘Listen To The Business Community More’, ‘Grow Jobs And Grow The Economy’. On almost no occasion did any of my would be leaders explain any practical mechanics of how they intended to encourage business. As a candidate who dared to care about the environment, and what my grandchildren will inherit from us, I was painted as being the negative, anti-progress luddite. I expected this, but I didn’t expect to so often be the only one with practical ideas about how the Council could take the lead in supporting existing businesses and helping create new ones. The strategy most seemed willing to take was bowing down before any open chequebook that comes our way, perfectly willing to override our community’s democratic wishes in the process. With a an over supply of climate change skeptics with an aversion to evidence based policy, perhaps I should have expected as much.

Since the announcement in May, I have met, listened to, talked to, written to and debated with thousands of people who care about Dunedin and where it is heading in the future. I’ve been surprised by young people railing against minimum standards on flats and older people sick of being governed by even older ones. I’ve been talked up in a Catholic sermon, stopped in the street by passionate strangers, and I met our current Mayor’s mother-in-law (for the record, a lovely woman who had“heard all about me”). This Saturday, more than a year after this began, I will find out if I will get the opportunity to represent. It is an odd feeling, having your entire life on hold, but when your entire life could change direction in less than seven days, you have little choice. The campaign will end on Friday, the results will be announced on Saturday and a whole new life begins on Sunday; whether that involves Mayoral chains, Council briefings or a stack of post it notes and soul searching is entirely up to the electorate.