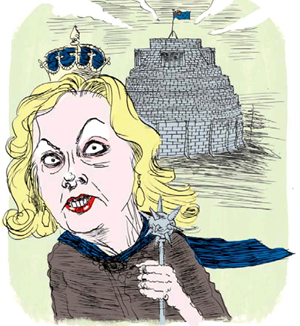 ON 17 SEPTEMBER 1956 Marion Watt, Vivienne Watt and Marion’s sister, Margaret Brown, were found shot to death in the Watt family home in the Glasgow suburb of Burnside. At the time of his family’s murder, Marion’s husband, William Watt, had been on a fishing holiday in Ardrishaig, some 90 miles west by road of Scotland’s largest city.

The Scottish police did not, however, accept William Watt’s alibi. By their reckoning, he’d had time enough to drive from Ardrishaig, stage a break-in to his own home, murder his wife, his daughter and his sister-in-law, and then drive all the way back to Ardrishaig. They were even able to produce witnesses: the operator of the Renfrew ferry and a passing motorist both picked Watt out of an identity parade.

Scotland, in 1956, still imposed capital punishment for the crime of murder. Had Watt been found guilty, he would have hanged.

That he was not found guilty is due to the fact that the investigation team was sent information which made it absolutely clear that the man they had arrested and charged with the Burnside killings could not possibly have committed the crime. Amazingly, the source of that information was the man whohad killed Marion, Vivienne and Margaret: Scotland’s most notorious serial killer, Peter Manuel.

Displaying the narcissism so often associated with psychopathic killers, Manuel was outraged that “his” murders had been attributed to someone else, and so he carefully fed just enough information to the detectives investigating the crime to make sure that the “credit” for the Burnside killings was not given to the wrong man.

Had Manuel not intervened, it is highly likely that William Watt would have gone to the gallows for a crime he did not commit.

UPON HEARING THE DETAILS of the 1956 Burnside killings case, I felt a shiver run down my spine. Though separated by 44 years and 19,000 kilometres, the murder of Christine and Amber Lundy was distinguished (if that is the right word) by police work almost identical to that carried out in the Scottish case.

Once again, the father, though out of town at the time of the killings, was assumed to be the killer. Once again, the case was held to hinge on the accused’s ability to make a 300 kilometre journey, pausing only to murder his wife and child, within the three hour period stipulated by the police “evidence”. And, once again, this Herculean feat was rendered plausible by dubious testimony supplied by dubious witnesses.

In the Lundy case, however, there was no narcissistic psychopath desperate to preserve the purity of his “work”. This time the accused father was put on trial and found guilty of his family’s murder. Mark Lundy was sentenced in April 2002. Not (thank God!) to death by hanging, but to life imprisonment with a non-parole period of 17 years. The poor wretch has spent the past 11 years behind bars.

I SAY “poor wretch” because the patient accumulation of new evidence by Lundy’s family and supporters was enough to persuade the Judicial Committee of the Privy Council that Lundy’s 2002 conviction was unsafe. Their judgement? That his conviction be quashed, and that he be tried again in the High Court of New Zealand.

What is wrong with the legal system in this country? Why is it, in those rare instances where a convicted person is lucky enough to have a family, or a benefactor, willing to spend many years (and many thousands of dollars) deconstructing the Crown’s case and the Police’s evidence, that so many eminent, learned and independent overseas jurists are so often convinced that New Zealand’s courts have wrongly convicted persons who, while they may not be innocent beyond reasonable doubt, are certainly – by that same crucial test – not guilty?

And why is it that our Court of Appeal has, over so many decades, demonstrated an almost wilful reluctance to allow the facts and the evidence speak with a decisive voice against what is manifestly (at least to the layperson’s eyes) a miscarriage of justice?

How was it possible that the evidence produced by Pat Booth and Jim Sprott failed to secure Arthur Allan Thomas’s immediate release? How could intelligent and experienced jurists have permitted the fairy-tale evidence of children to convict Peter Ellis? (Especially following the damning revelations of coached child witnesses, bizarre evidence and moral panic swaying juries in remarkably similar cases in the USA and the UK?) What was it that prevented the Court of Appeal from calling the NZ Police to account for their botched handling of evidence in the David Bain case? How is it that foreigners see immediately what New Zealand judges and juries have, over and over again, simply refused to recognise?

THE ANSWER, I believe, lies in the character of the New Zealand ruling-class. The narrow social strata from which New Zealand’s lawyers and judges are drawn is distinguished from the rest of the New Zealand population by two particularly obnoxious characteristics. The first is its unwavering belief in its own moral and intellectual superiority; and the second is its acute sense of vulnerability to what it regards as the democratic distempers of the vulgar masses.

In a society where the egalitarian impulse has always been strong, the objectionable core beliefs of New Zealand’s ruling class leave it dangerously exposed, not only to populist reprimand, but also, in the worst possible scenario, to social and constitutional eclipse. Over the course of our history these fears have produced a ruling class in which the conviction is strong (to the point of being unchallengeable) that to concede error is to admit weakness. Better that a score of innocent individuals rot in jail, than the Powers-That-Be admit to making a serious mistake.

Nowhere is this unwillingness to admit fault more tellingly on display than in the conduct of our present Minister of Justice, Judith Collins. Her treatment of the distinguished Canadian jurist, Justice Ian Binnie, revealed just how energetically she is willing to assert the impossibility of systemic error.

Predictably, in the wake of the Privy Council’s quashing of the Lundy conviction there have been calls for New Zealand to follow the UK’s lead and establish a Criminal Cases Review Commission to which highly questionable and/or contentious convictions could be referred for investigation. Since the UK body was established in 1997 it has quashed more than 350 unsafe verdicts.

The response of New Zealand’s Minister of Justice? “New Zealand has a robust appeal process and setting up any new independent body would not extinguish public debate.”

A “robust appeal process”! Tell that to Arthur Allan Thomas, Peter Ellis, David Bain and Mark Lundy! Tell it to the unknown number of other New Zealanders who languish in prison because they do not have a Pat Booth or a Joe Karam willing to spend years fighting for their freedom.

When I consider the adamant refusal of Judith Collins to concede the slightest error, I am seized by how very, very lucky we are in New Zealand to have had, roughly 50 years ago, a Parliament wise and liberal enough to abolish the death penalty. Because I am not at all convinced that our ruling class would rather admit to error than put an innocent man to death.

I consider Judith Collins’ trashing of Justice Binnie’s report – and I am not convinced at all.

Certainly, if New Zealand had still practiced capital punishment in 2002, then Mark Lundy would now be far beyond the Privy Council’s power to render him either justice or mercy.