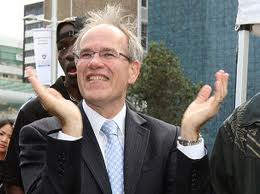 When ‘who cuts the lawn’ is the lead local election news issue, it shows how juvenile our public debate really is. Auckland is a SuperCity of poverty but you wouldn’t know it when berms have filled the lazy gaze of the bored media. The Herald on Sunday last weekend remarkably managed to leave John Minto entirely out of their profile of Mayors.

With no clear evil candidate like John Banks to rally Aucklanders into voting, apathy could catch Len Brown off guard. Uesifili Unasa’s campaign in South Auckland will hurt Brown and the unoffensive Palino could sneak through a win. Minto’s strong grass roots campaign can’t be ruled out in providing a surprise level of support as well.

If Union members are feeling empowered by their role in the Labour leadership election, and if they follow their own voting guide, the SuperCity could end up with an incredibly progressive local Government. A clear victory to the CityVision teams could be a sign of things to come in the 2014 election.

Punditry aside however, the real issue here is the apathy. The total lack of interest in the elections is a reminder of how important it is that NZ starts civics classes in schools and adult education centers. The importance of citizenship is a lesson that requires constant attention if a democracy is to thrive and limping home with maybe as little as 25% suggests a terribly sick state of affairs.

Some have claimed online voting would make this easier, but with the ease of how those voting systems can be hacked, expect more cynicism, not less apathy.

One way of actually raising the visibility and interest in local councils would be dedicated time on the regional TV stations. Regional stations are all about to die from Kordia selling the remaining Freeview frequencies to business interests despite the Ministry of Culture & Heritage’s responsibility to find the regional stations a home on Freeview. If Councils were paying to have their meetings and shows focused on local politics screened on regional stations, it would give those stations a financial lifeline while rising the profile of Councils. Face TV is about to slip away from any free to air presence if the Ministry of Culture and Heritage can’t shame Kordia into providing something and looking at the current Broadcasting Ministers ‘do nothing and let public broadcasting die’ stance, I’m not hopeful.

Auckland needs to be directly involved in the building of council homes and the provision of social services funded from central Government and an upgrade in public transport services that goes beyond the City Rail Link. Even if fully funded, the CRL won’t make gridlock any better by 2030, it will in fact be worse.

We didn’t really hear any of that during the election as the media moved from luke warm disdain to cold shivering indifference in their coverage of the Mayoralty race.

Growing inequality and unaffordable housing are creating tensions within the SuperCity that require direct action and some type of strategy, sadly the total eclipse of the berm has blocked any real discussion on that as well.

The SuperCity was supposed to give Auckland one voice, now it has that voice, Auckland doesn’t seem to know what to say and isn’t sure if anyone is actually listening.