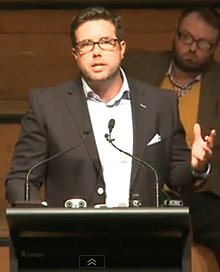 One of the most amazing revelations that came out of last nights TICS Bill public meeting in Wellington was Seeby Woodhouse telling the audience that since he spoke out against the Government’s GCSB legislation he was stopped entering America and questioned about his business and shockingly he was pulled aside and questioned by NZ officials when re-entering NZ.

Seeby has been overseas 8 times and has never been questioned, but since speaking out he suddenly gets this type of intimidation. They knew his itinerary, what he had purchased on credit cards and questioned him on what he was doing.

Seeby Woodhouse is a Gen X entrepreneurial legend, he’s the Dave Dobbyn of enterprise. He set up Orcon in his parent’s bloody garage and now runs the very brilliant Voyager. How the hell is Seeby Woodhouse a threat? How can Seeby Woodhouse be a danger to anyone for simply adding his voice to many others in disagreeing with mass surveillance?

The day Seeby Woodhouse becomes the enemy is the day ‘National Security’ becomes a thought crime.

The TICS Bill enables the GCSB legislation by forcing all Telecommunications companies to build back doors to allow the NZ intelligence agencies (and by default the US intelligence agencies) to spy on everything you send across their networks. What is most terrifying is the point Vikram Kumar, the CEO of Mega raised, and that is the Government will also gag and force all companies to lie to consumers about the Government being able to spy on their communications.

This law in association with the GCSB legislation represent the framework for a mass surveillance State and it is a cancerous tumor within the democratic body.

The Anti-GCSB collation will continue to work towards keeping this on the political radar., watch this space.