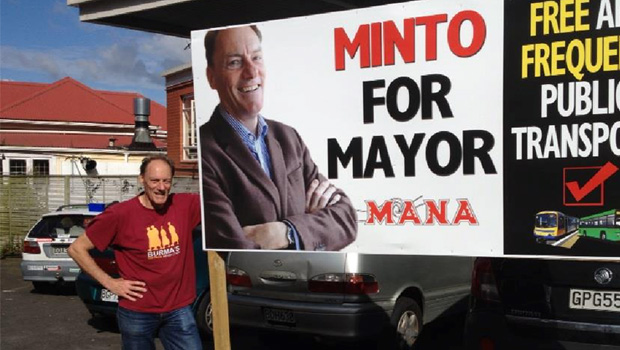 It’s hard to get inspired on the mayoral campaign trail at most meetings – either for the candidates or audience.

Most local meeting s are predictable affairs where each candidate gets the opportunity to speak for a few minutes and then answer questions later in a panel. They are attended by relatively small numbers of engaged voters who almost to a person have already made up their minds as to who they intend to vote for well before the meeting.

This is not a criticism of these meetings or those who work hard to organise them. Rather it’s a criticism of politicians who have done their best to take the politics out of politics and replace it with various varieties of bland meaningless, “motherhood and apple pie” statements where voting depends on recognition of the name or the brand rather than on policy differences.

Stunted visions with colourless, tasteless brand politics dominate. Anything from the Labour and National camps for example have to pass the “will-big-business-object?” test before they get to the hustings.

All that changed yesterday with the first truly inspiring meeting of the campaign.

It was the Mana Movement local body election campaign launch and yes I’m not an objective observer (I’m the Mana Movement candidate for the Auckland City mayoralty) but still the meeting was rousing, moving and real.

It was a standing-room-only public meeting (approx. 200 people) in Mangere’s Metro Theatre which combined a traditional election meeting with the launch of a local community campaign to stop the council’s big new motorway proposed to go through the heart of Mangere and Otahuhu, destroying hundreds of homes and cutting the community in half in the process.

It was this combination which made it a politics demanding community involvement rather than just the politics of the ballot box which is so often disembodied from everyday concerns.

Mana’s local candidates spoke but it was the locals who stole the show as they came to the front and spoke about their community and how the road would affect them and their families. This is what made it moving and real.

A local campaign committee was formed to fight the road and the first action was the launch of a petition. This will be followed by a public meeting next month to wind up the campaign.

The fight against the road will continue beyond the local elections. Everyone left with the knowledge that this campaign will not be won simply by casting a vote but that, irrespective of who gets elected, it will be mobilising the community to active collectively which will stop this hideous piece of tarseal.