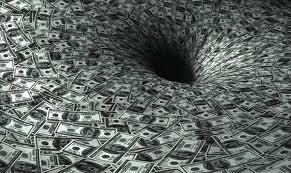 Five years after the Lehmans collapse myopic optimism prevails. John Key and Stephen Joyce don`t seem too worried, the Reserve Bank has its eye on financial events as the business media looks for green shoots of recovery.

Such faith is misplaced and dangerous.

Let us not forget what actually happened back then. On Friday September 11, 2008 US investment bank Lehman Brothers reported a US$3.9 billion loss following $7.8 billion of credit write downs. The likelihood of a huge financial failure bought together a weekend meeting of senior bankers and regulators. Treasury Secretary Henry Paulson told them to measure the capital losses of Lehman` real estate and equity holdings and construct a funding mechanism for their bad assets in order to encourage a willing buyer. The scheme failed and on Sunday evening September 14 the US Treasury and Federal Reserve allowed Lehman Brothers to fail.

This was a global news event which sent panic waves through the commercial paper and short term money markets. Thousands of businesses worldwide relied on these markets to cover routine expenses such as payroll and utility bills. When millions of depositors tried to withdraw funds, worldwide business failures appeared imminent. Within 36 hours sharemarket prices plummeted everywhere. The effects of Lehman`s fall on the US banking system were enormous. Merrill Lynch was sold to Bank of America. The Federal Reserve rescued AIG, the world`s largest insurance company. At least 20 other US financial institutions collapsed. Citigroup, once the world`s biggest, most valuable and powerful financial services firm was virtually crippled.

The reality of financial collapse was officially recognised on September 20 when the US Treasury decided to purchase almost $700 billion of worthless securities from troubled banks. The document was initially rejected by the House of Representatives before passing into law. Thus began the Troubled Asset Relief Plan (TARP), an extraordinary, multi-trillion dollar rip–off whereby Federal regulators used taxpayers money to bail out the investment banking system.

So, what explains the carnage? Well, in my view we should start by blaming the investment banks. In the 1990s they rapidly expanded their operations. Apart from lending, funds management and trading for clients, they became major speculators in their own right. And, they had the gall to do so with other peoples` money. Here, the repeal of the US Glass- Steagall Act in 1999 was absolutely crucial. Since 1933 this legislation had legally separated commercial banks, which held public deposits and loans, from investment banking. Once this was no longer the case banking conglomerates could draw upon huge resevoirs of depositors` money to manipulate financial markets.

For the biggest players the strategy was to first, enter a particular market to produce a price bubble; second, make huge speculative profits and third, withdraw, collapse the bubble and enter a new market. This explains the 1990s currency bubbles in the UK, Russia, Mexico and South East Asia and the internet `dot com` boom/bust of the late 1990s. It also explains the early 2000`s housing bubble, especially in the United States. In essence investment banks operated as giant private clearing houses for equities, bonds, derivatives, currencies, commodities and mortgages. Even worse, a vast shadow system of inter-bank trading grew out of control.

This was the bizarre, secret world of Special Investment Vehicles (SIVs) shaped by derivatives and securitisation. Derivatives allowed speculators to bet on the price movements of all capital assets such as stocks, government bonds, physical commodities in any combination whatsoever. Securitisation allowed individual capital assets to be packaged up to be bought and sold. Most disturbingly of all, packages of debt, including household debt (mortgages) could also be traded and speculated against, without official auditing.

Eventually, the shadow banking system, Anglo-American household debt securitisation and mortgaged based derivatives became joined up on a global scale. We all inhabited a massive, virtual pinball machine. Computerised data, money and debt flashed from point to point in real time, as the day of reckoning came closer to hand. Let us now fast forward to November 2008 to see how the newly elected Obama administration caved in to Wall Street.

By then it was obvious that major government intervention was needed to prevent further bank runs, settle the financial system and to counteract the recessionary cycle of diminishing loan finance, economic stagnation and unemployment. The key question was, what form should government intervention take? Two options were on the table. With the `takeover` option the government takes ownership of failing financial institutions in order to delete `toxic` assets and refunction banking operations to support the `real` economy. Old financial managers lose their jobs, shareholders are wiped out and the remaining losses are carried by creditors and taxpayers. Certain banks are closed, others may be returned to the private sector at a later date. The second option can be called `the blank cheque`. Simply put, the government props up surviving financial institutions. Banks are kept afloat in their existing form, managers keep their jobs, shareholders retain some of their stake and creditors receive some protection. This is all funded by the taxpayer. Yet, if certain banks recover, the benefits are confined to managers, shareholders and major creditors. Ordinary people look on, as new forms of speculation and counter-party trading flourish. The preconditions of the next financial crisis are thus put in place.

Obama took the` blank cheque` option under a smokesreen of anti-banker rhetoric. Yes, there was a stimulus package in February 2009. However, as the largest banks returned to their speculative habits second tier banks could not obtain loan money for farmers, manufacturers, construction firms, retailers and start up businesses. Meanwhile, over in the Eurozone, opportunities for financial speculation abounded. The new target was sovereign national debt. The largest banks took derivatives positions via hedge funds against the most indebted European economies; Greece, Spain, Portugal and Ireland. Investors and risk analysts calculated whether or not indebted countries could service their external debts. Would they actually be able to implement brutal austerity programmes? Who really cares, as long as we make a killing.

As the sovereign debt crisis of each country got worse the European Central Bank and the governments of larger economies acted to preserve the loan portfolios of private banks, regardless of the social pain involved. The prospect of a major debt default followed by another, even bigger, financial collapse cannot be ruled out. That in turn could trigger a full blown depression. Where would this leave New Zealand? Well, the Australian banks would have to pay more to fund themselves from global money markets . The costs would be offloaded onto ordinary Kiwi mortgage holders. The risk-return calculations of funds managers would be destroyed, the Kiwisaver scheme could falter as medium risk investments turned sour. General financial anxiety would become the norm.

Economically literate politicians able to think on their feet would be at a premium. If the worst does indeed come to pass within the next five years lets hope that David Cunliffe is Prime Minister.