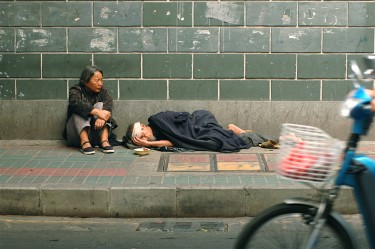 Living Below the Line week starts on 23 September. During this week, kiwis will take up the challenge of feeding themselves for only $2.25 per day, which is the internationally recognised extreme poverty line (adjusted for purchasing power parity). The brave lot volunteering for this will be sponsored for their efforts and the funds raised will go to some well respected aid agencies. $150,000 has been raised at the time of writing; an amount that will no doubt multiply by the time all the money is brought in.

There’s a lot to like about this fundraiser. I admire its creativity. I like the fact that a bunch of organisations are working together on this and I respect the participants for attempting to experience something of what it is like to live in poverty. I hope it is a success.

But, the Global Poverty Project, which organises Living Below the Line claims this is not just a fundraiser, but that it also aims “to change the way New Zealanders think about extreme poverty”. This is an admirable objective, but here is where I have some issues.

To start off with, the people participating in this fundraiser will not actually be living on $2.25 per day; they will just be eating for $2.25 per day. For the extreme poor, $2.25 is not just your food budget; it’s your entire income. It’s got to cover your rent, your phone, your electricity, your kids’ school fees; the lot. Amazingly, many people around the world find ways to factor these expenses into their daily $2.25. But, then come the unexpected things, like medical bills or funeral costs. When it becomes necessary to find money for these, you’re no longer talking about cutting nutritionally unnecessary luxuries out of your diet; you’re talking about actually not having enough to eat. A perhaps surprising fact is that it is possible to eat on $2.25 per day (the Living Below the Line people have even prepared a menu and a shopping list to prove it). But, covering all your basic costs with only $2.25 per day is much more difficult. In fact, it’s impossible.

My bigger problem, though, is with the Global Poverty Project’s leading assertion that the world can end extreme poverty within a generation. Clearly, this idea has enormous appeal (who could not be excited by this prospect?). But, frankly, this is as naive as the once-believed notion that the United Nations would end all international conflicts.

This claim suggests that poverty is a simple problem. It is not. It implies that we fully understand the causes of poverty. The uncomfortable truth is that we don’t. It presumes that because so many people have been lifted out of extreme poverty in Asia, that people can be easily lifted out of poverty in Africa. If only wishing made it so.

I can understand the need to simplify messages for a wide publicity campaign. In a crowded media world, it’s the confident, catchy message that is going to penetrate rather than the complex one. The aid agency that stands up and says that “poverty is a complex issue that we’re all struggling to figure out” is not going to raise as much money as the one claiming “we know what to do and we only need ten bucks from each of you to get the job done”.

But, the message that poverty is a simple issue that can be resolved in only a few decades is a dangerous one because if that is what people believe, then that is what they will demand from aid agencies and concerned governments. And make no mistake, those agencies and governments will give the public what it wants (the former in exchange for your money, the latter for your votes) and they will continue applying poorly planned, quick impact fixes at the expense of implementing well thought out, longer term solutions.

To be honest, I feel a bit guilty about criticising Living Below the Line; like I am raining on what is actually one of the better charity parades around. I certainly don’t want to discourage anyone who is taking part in what is still a very worthy cause. But, organisations like Global Poverty Project need to do better by resisting the easy slogans and attempting to genuinely raise the level of awareness and debate. And we – intelligent, concerned Daily Blog readers – need to demand that they do.

There are no easy solutions to extreme poverty and we are kidding ourselves if we think that there are. Poverty cannot be eliminated quickly and we stand only to delay reaching that monumental goal by pretending that it can be.