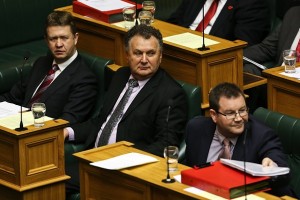 RESULTS: Cunliffe knock out in round one with 51.15%

There are many winners and many losers of Cunliffe’s ascension to leadership. Let’s be brutal shall we?

David Cunliffe: After the appalling manner in which Cunliffe was treated during the manufactured leadership coup at the last Conference, David has emerged as the peoples champion for Labour. The winds of history are now at his back and he represents the first real post-Clark Labour Party. The maligning and attempts to break him have all been for naught as he makes a Ned Stark like return from the grave, reattaching his own head with nothing more than a swiss army knife, a book on Marx and a Michael Joseph Savage portrait. He must unify those who opposed him in Caucus by rewarding the talent amongst their ranks, punish the non-performing ones and promote his own new blood. I’ll give a full run down on who needs to go and who needs the love in tomorrow’s ‘Cunliffe’s Shadow Cabinet’ blog.

Shane Jones: The Jonsey has emerged out of this with the sort of Teflon coating that Key applies daily. The charm of his ‘no-soft-cocks-allowed’ garden variety sexism is matched only by his desire to start randomly punching Green MPs in the face. His bloke appeal however is a greasy fat dripping sausage roll at a buffet for the morbidly obese in terms of wider public appeal. That said, he has earned his seat at the top table – for now. Shane talked a good talk, he now has 16 months to show the walk if he has Ministerial aspirations again.

The Labour Party affiliates and members: There will be much dancing and singing in the streets for the poor long suffering Labour Party affiliates and members. For decades they have served the interests of the Party only for the Party to show bugger all interest in them. They have finally had their say and it’s had a mighty impact. Affiliates can expect real employment law reforms and members can demand a more clearly defined left wing political aesthetic.

The Labour Party: The democratization of the leadership process has generated more interest and energy into the Party than a hate group posting on Whaleoil. It’s been incredibly empowering for everyone involved and the Party can hold its head up high. The sour note would have to be their very poor delivery of social media and online management. Bewilderingly poor.

The Political Left: For a whole bunch of unique reasons (which I will go into in my next blog ‘Cunliffe ain’t for turning’), the wider political left benefit enormously from Cunliffe’s win.

Charles Chauvel: Time someone bought him a one way ticket home.

David Parker: Must be a strong pick for Deputy.

Wellington Press Gallery: The perception has always been that the Wellington Press Gallery are lost so far up their own arseholes they mistake their colons for Ministerial press releases. Nothing highlighted the lack of actual political awareness better than Wellington Press Gallery pundit after pundit proclaiming Grant was the lead contender. When Grant came 3rd in both polls, many Press Gallery egos were badly bruised. Expect bitter spiteful proclamations to start flying at Cunliffe as over compensation for the exposure of their bubble world blindspots.

Beltway ABC Mafia: The ABCs hate Cunliffe with a searing, boiling venom of resentment which means they will always be plotting. Look at how they were prepared to vote against their own members and affiliates political hopes. Their hold on power has been broken but they won’t go quietly. The institutional gatekeepers who have worked so tirelessly to leave the sleeping dogs of Labour’s neoliberalism in a coma have finally been rolled by the bark of the members and affiliates who still know how to fight. Those Union bosses welded to inaction for fear of showing how weak they really are if they get into a fight have been ignored and pushed aside by their members demanding more than lip service for their interests. The ABCs pathological dislike provides Cunliffe with the incentive that if he doesn’t win 2014, the ABCs will assassinate him with prejudice, this means Cunliffe has to think outside the square for ways to ensure a victory in the next election if he wants to survive beyond 2015. Not a great day to be a self-important Wellington twitter hipster.

Shadow Cabinet reshuffle: There is so much dead wood in Labour’s front bench they could rebuild Christchurch three times over. There have to be demotions and promotions, not just for peace making and the rewarding of supporters, but based on actual ability. There are plenty of good brains in Team Robertson, but there are also a whole lot who are aren’t. I will have a complete blog on who should stay and who should go in Cunliffe’s shadow cabinet tomorrow.

John Key: Despite Matthew Hooton boasting that he had a text from Wayne Eagleson saying that the PMs office wanted Cunliffe to win because he’s easier to beat, National are nervous. For the last 20 months Labour has had a dead leader unable to communicate with any authority in the media, it’s allowed Key and the Gang to look positively brilliant, but that game has comes to an end with the election of Cunliffe as leader. One on one National now know that they face a contender who can knock Key out. Captain Giggles is about to have his buzz killed, Key’s only chance of winning the 2014 election now is to self appoint himself Team NZ victory parade King and appear on a throned float wearing a crooked crown doing bong hits out of the America’s Cup while twerking.

The Greens: The Greens would have been sacrificing Hemp suits to Goddess Gaia in the hope Grant won, as enraged activists would have walked on mass to the Greens to give them 20%. They know their high polling has been as much a rudderless Labour as genuine enthusiasm. While they won’t be hitting 20%, Cunliffe’s unique circumstances (which I’ll go into in another blog) mean that he has to view the Greens as a strategic strength, not a threat. There is much that can be discussed between the two.

Grant Robertson: Although, this wasn’t his time, Grant has proved why he is seen by many as a true contender. I honestly believe he will be NZs first gay PM and that it will be a 2020 or 2023 run. His poor external polling tells him that he must step up his public persona. Cunliffe would be smart to appoint him to a role where he can build his persona but for the benefit of the Party as opposed for a direct leadership challenge. Grant has earned his shot at the top job but desperately needs to make some new Auckland friends.

So what’s next? I cover Cunliffe’s political direction and why the MSM are so wrong about his left wing stance being a pretense in my next post ‘Cunliffe ain’t for turning’ and detail who Cunliffe should promote and demote in ‘Cunliffe’s Shadow Cabinet’ tomorrow.

I’m off for some more vodka shots and a few rowdy versions of ‘Do you hear the people sing, singing the songs of angry men’ with some Auckland comrades and Team Cunliffe supporters. It’s going to be a late one.