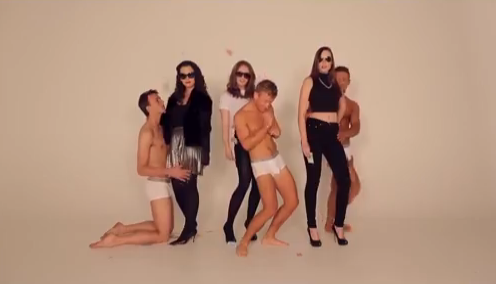 Everyone saw the ‘Defined Lines’ parody that blew up this week. I thought it was brilliant and I loved everything about it.

The lyrics told everyone that women actually want to be treated like human beings. Then there was the video, which was probably the best part about it. That role reversal showed just to what extent women are treated as if they’re not even human in most music videos out there.

But then the video got taken down and shit officially got real. What was meant to be an addition to the huge number of Blurred Lines parodies in the internets became the nail in the coffin for people who still want to maintain that the feminist movement is no longer necessary.

Of course we’re not all equal. We shouldn’t have to prove that to anyone. But the fact that it got taken down shows that no one likes it when you criticize the dominant discourse.

In terms of the content of the video though, the whole message was that we have a voice and we have something to say. We’re not just there for show. Don’t treat us like we’re there but not there at the same time.

This is the case for people of the disabled community. I hardly see people like me in the media and it’s annoying that we seem to not be included in this movement to make the media diverse and inclusive of all communities.

The only show I can think of that includes someone with a disability being ‘normal’ is Walter Jr from Breaking Bad (keeping in mind there could be more shows that I don’t know about). Artie Abrams from Glee does not count. Why? Because unlike the actor that portrays Walt Jr, he does not have a disability in real life. The inauthenticity of that is so transparent and any high schooler living with a disability can see that, making it all the more non-relatable.

Much like women in music videos who are only wanted if they are there purely as part of the decor, people with disabilities are not there at all. Just like how young girls need to see positive representations of people they can identify with in the media, young people living with disabilities need to see themselves in the media too to promote a positive self-image and the fact that there is nothing ‘wrong’ with them.