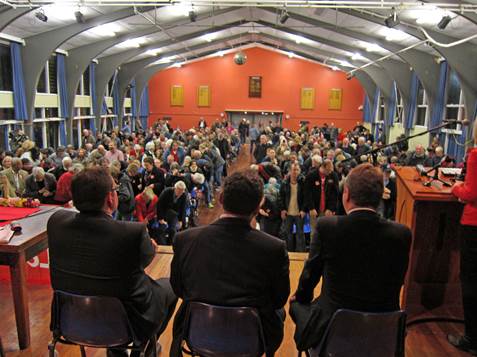 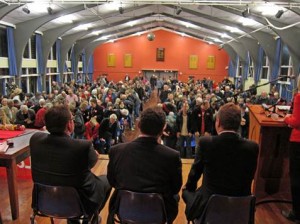 Photo by John Miller AMIDST ALL THE FUN of flexing their new democratic muscles, Labour Party members should still watch their backs. They should also remember that when democracy was so graciously bestowed upon the lower orders, it came with an important proviso: that they never use it.

But they are using it. Halls filled with hundreds of ordinary working people have become the settings for the sort of political debate that presages real change. To the astonishment of just about everyone, the democratisation of the Labour Party is fast eroding the political status quo and posing a direct threat to the prevailing economic orthodoxy. The Powers That Be have been very slow to recognise the danger, but they are wide awake now and hurriedly pulling together a counter-strategy. It won’t be pretty.

The front-line grunts of the counter-strategy will be the mainstream media’s political journalists. Most of these have no real experience of grass-roots democracy and even less understanding of the ideas and aspirations of Labour’s rank-and-file.

Just how helpless they are in the face of genuine democracy was demonstrated at last year’s Labour Party Conference where all the processes currently on display in the leadership contest were endorsed. Rather than tease out the likely consequences of Labour’s rule changes for New Zealand politics as a whole, the news media chose instead to cast the entire democratic exercise as a power grab orchestrated by David Cunliffe.

The Old Guard of Labour’s caucus (Phil Goff, Annette King, Trevor Mallard) realising how much the new Electoral College was likely to undermine their ability to control the direction of the party, did nothing to discourage the media’s misperception of Cunliffe’s intentions. They were desperate to keep David Shearer in place until the reins of government were securely in his (their?) hands.

They were right to be worried. The new system is revolutionary. To grasp just how revolutionary, consider how effectively it would have prevented the takeover of the Labour Party by Roger Douglas and his cronies.

For a start, the infamous “Fish and Chips Brigade” (Roger Douglas, Michael Bassett, Mike Moore and Richard Prebble) would have had no prospect of toppling Bill Rowling and replacing him with David Lange. What’s more, whoever Rowling’s eventual replacement turned out to be – Russell Marshall? Anne Hercus? Jim Anderton? – they would have been the choice not of the right-wing of caucus, but of the left-wing rank-and-file, and the still unbroken (and very radical) trade union movement. Rather than “Rogernomics”, New Zealand would have gone through a period of economic reform much more in line with Labour’s social-democratic principles.

Sadly, most of New Zealand’s political journalists are incapable of running this sort of counterfactual historical scenario. Having grown up under the crushing ideological hegemony of neoliberalism they have difficulty imagining any kind of political or economic alternative – let alone one from the Left. Accordingly, their initial reaction to Labour’s leadership contest has been one of utter consternation. To their eyes, the process appears to be generating a dangerous variety of democratic distemper. Labour’s rank-and-file come across as barking mad and David Cunliffe and Grant Robertson appear to have taken leave of their senses. Only Shane Jones gives them the impression of retaining a vestige of economic “common sense”.

A strong media consensus will, therefore, very likely congeal around Jones as Labour’s “only hope” of being taken seriously. Any other candidate emerging victorious from the Electoral College will be savaged by the mainstream media all the way to the General Election.

In this they will, naturally, be equipped and encouraged by the National Government, the Treasury, Business New Zealand, the Australian-owned banks, right-wing economic analysts, the NZ Initiative and every other manufacturer of neoliberal munitions in the country. The Prime Minister will depict a Cunliffe- or Robertson-led Labour Party as some sort of doomed left-wing suicide-bomber, locked in a final, fatal embrace with the Greens and Mana, and waiting only for polling day to blow himself and the rest of the far-left “Devil Beasts” into bloody little chunks.

But what if Labour’s radical new message, combined with the unrelenting hostility of the mainstream news media and the vicious antagonism of all the usual right-wing suspects, turns out to be just what was needed to enthuse and mobilise the 800,000 New Zealanders who saw no good reason for voting in 2011? National simply could not survive the sudden return of hundreds of thousands of left-voting citizens to the polling booths.

A Labour-Green landslide would leave Shane Jones in an uncomfortable position. Overnight, he (and however many of the Labour Right brotherhood had survived the process of gender equalisation) would become the focus of media attention. It is to “the Jones boy” that the whole neoliberal establishment would turn for protection against the “North Korean-style, lunatic Communist, Flat Earth-dwelling maniacs” who now occupied the Treasury benches.

With any luck, the new minister responsible for regulating New Zealand’s supermarket duopoly will tell them, with great dignity and politeness, to go fuck themselves.