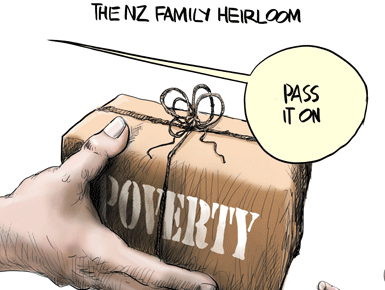 Firstly, congratulations on winning the leadership of the New Zealand Labour Party. With the “primaries” out of the way, it’s now time to knuckle down and work together to throw out this self-serving, incompetent government. A Labour-Green-Mana(-NZ First?) coalition is a government-in-waiting and there is much work to be done to rebuild our society.

Our first concern should be child poverty. This is a pernicious problem (I refuse point-blank to call it an “issue”) which creates a toxicity that seeps through every aspect of our society and economy. Even National-voting comfortable middle class aspirationists cannot escape the consequences that child poverty creates in our country.

Some estimates suggest around quarter of a million children living in poverty.

This is unacceptable and it beggars belief that some New Zealanders think it is not their problem. Well, I’ve news for those naive people; it is our problem. Ignoring it will not make it go away. One way or another, we all pay for this ongoing cancer in our midst.

Our current Prime Minister, John “What-me-worry?” Key, is Minister for Tourism. He diligently carries out his duties to promote tourism by lounging on the warm, sunny beaches near his holiday home on Hawaii’s island of Maui. Quite how this benefits New Zealand tourism escapes me… but I’m no expert on this matter.

An incoming Labour Prime Minister can do much better. (In fact, I can’t see how he couldn’t.)

It is my belief that the new Leader of the Labour Party, and incoming Prime Minister, should declare to the country the seriousness of child poverty.

This can best be done by creating a new role of Minister for Children.

It would send a clear signal to every New Zealander that this is our number one priority and that the obscenity of child poverty will no longer by tolerated by decent, fair-minded New Zealanders.

There is no need for a Ministry of Education or any similar bureaucratic body. My suggestion is for an ODESC-style agency comprising  of representatives from various ministries; departments; and NGOs  which would liaise and draft policies and agendas to attack child poverty.

Child poverty is a crisis in our once egalitarian country. There is simply no excuse for a society that considers itself fair and decent to permit this to fester.

As for those who bury their heads in the sand by playing the blame-game – suggesting that parents are at fault for having children when their social-economic circumstances are dire – should reflect on these points;

The next Prime Minister of New Zealand will not have the luxury of lying under a Hawaaian sun on a beach in Maui.

As Minister for Children, he will have his work cut out for him. This will be a real working Prime Minister.