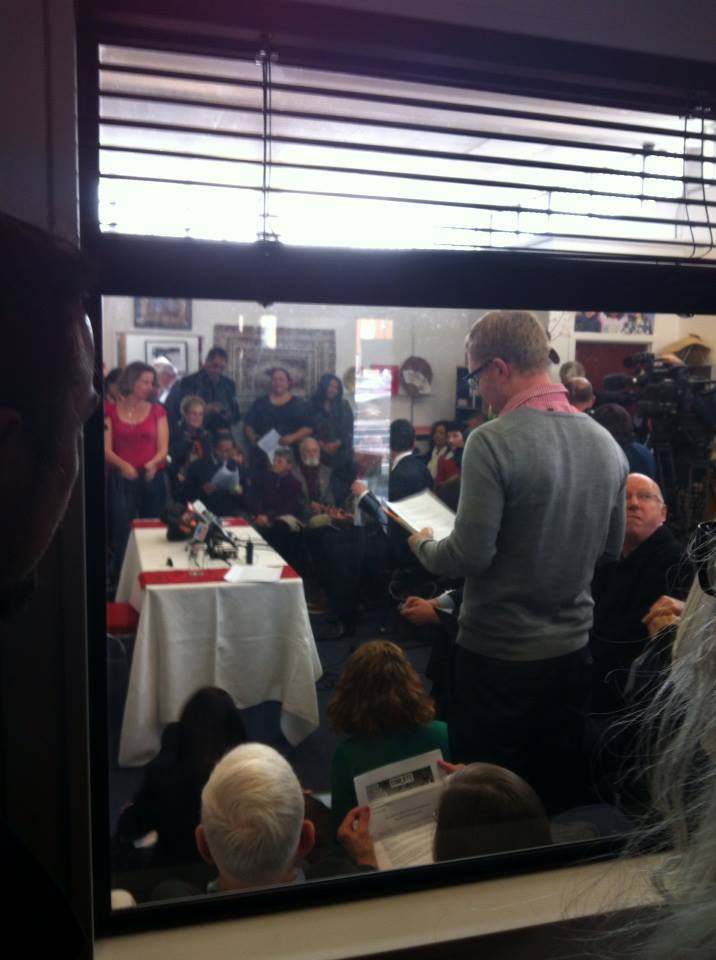 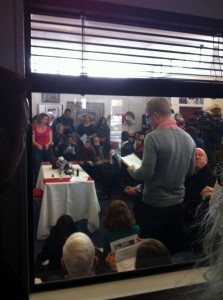 And so it begins. The symbolism of Cunliffe’s diversity and man of the people setting with strong Labour  MPs representing the female, the left, Maori, Union, Pacifica and Gay factions of the Party compared to Robertson’s one on one beltway quiet chat with Patrick Gower to announce his candidacy must put Cunliffe in the lead.

It’s interesting how many  gallery press are all convinced Robertson will win. They must be placing those assumptions to one side after todays launch by Cunliffe. Speaking with Patrick Gower & Corin Dann afterwards, both were impressed with the impact of Cunliffe’s launch.

This is a great battle of ideas for Labour, they should feel proud that they have such amazing candidates for leader. 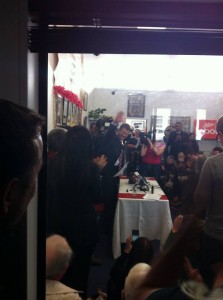 Today I am announcing that I am seeking the leadership of the New Zealand Labour Party.

I have taken this decision carefully after talking to colleagues, supporters and family. I have been very humbled by the response. There is a strong sense that now is the time for a new beginning for Labour and for New Zealand.

Their view is that I can bring together a party and a government that provides a strong, clear voice for fairness, inclusion and prosperity to be shared by all.

I believe that now is the right time to answer that call.

Our shared vision is to rebuild our society so that everybody – not just a lucky few – gets the chance to succeed and make the best of their potential.

In my role as a local MP and a Labour Party spokesperson, I’ve travelled around New Zealand and found that everything we as Labour people believe in, everything we’ve fought for before, is being threatened by a Government that has turned its back on hard working New Zealanders and has stopped listening.

I am deeply saddened this Government is so intent on cutting deals for its big business mates and kowtowing to powerful foreign interests, that it is willing to sacrifice so much of what we hold dear.

We still treasure the freedoms and civil liberties that our forebears fought for and the sense of fairness and decency we once believed we all stood for.

Like all of you, I am sick and tired of watching hope die in the eyes of our young.

I refuse to stand by and let these kids become part of the first generation to do worse than their parents in this country.

This has got to stop.

I want to make New Zealand a fairer place, by strengthening and supporting the most vulnerable members of our society and by giving every Kiwi kid a fair chance.

By strengthening not shrinking, support for our schools and hospitals.

By strengthening, not shrinking, the ability of every New Zealander to have a warm, comfortable home.

And, above all, by strengthening a high-value, high knowledge sustainable economy that will create the value that we can all share.

The time has now come for Labour to rise and join with our communities to build this strong and fair New Zealand, a New Zealand where our finest traditions of ‘a fair go’, our precious environment and a peaceful, principled society get a new beginning.

In short, I will be making sure that my children and your children are part of a New Zealand that is coming together not coming apart.

Kiwi mums and dads are spending more hours on the job, spending less time with their kids, bringing home a smaller wage and having to pay more for power, housing and food.

Is this the kind of country we want to live in and bring our kids up in? I say ‘No’. Labour says ‘No’.

I am proud to be part of a caucus and a wider Labour movement that has the talent and commitment to make a difference and serve our communities.

Together, under a Labour Party that I lead, Labour will always remain true to fairness, equality, opportunity and community.

Together, we will dare to provide transformative ideas that will change the future of this country for the better.

I believe I can communicate that vision with passion, power, and presence. As a leader, I know my first duty would be to bring together the strengths of our caucus and our party, listening to all and working with all, to forge a fighting force that can give back tomorrow to the children of our nation.

Over the next few short weeks, I will be seeking your support to be part of my vision to take Labour to victory in 2014.

I know Cunliffe’s speech must have terrified the right because about 5 minutes after Cunliffe gave his speech, Matthew Hooton was texting me screaming abuse. The Right are frightened. Very frightened.