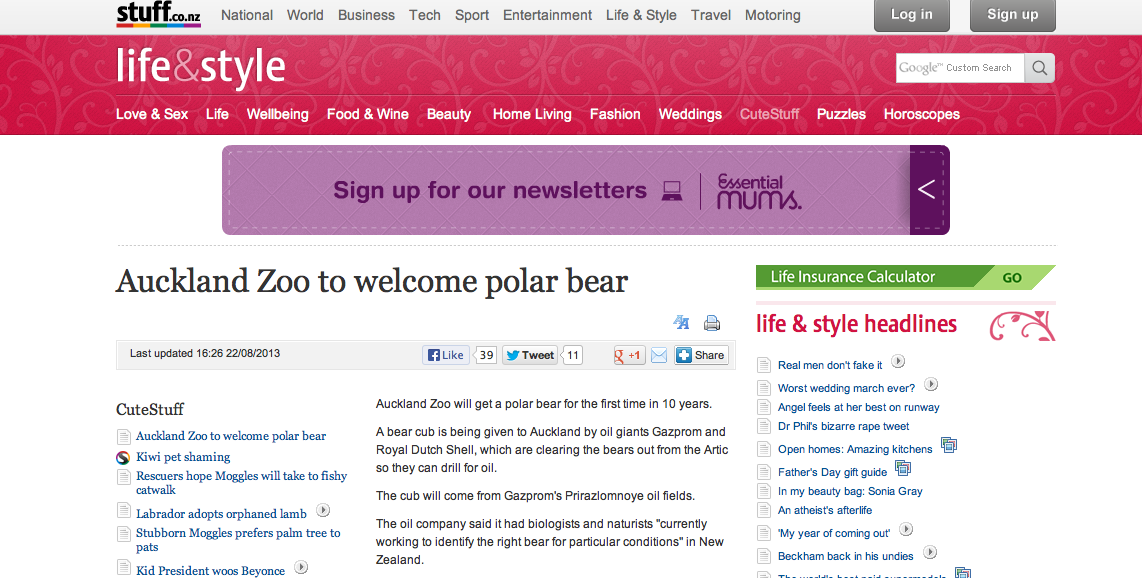 The graduate children Stuff are reliant on to staff the online fiasco that is stuff.co.nz have been pranked, and pranked hard. My guess is this will get taken down as soon as they realize they’ve been pranked 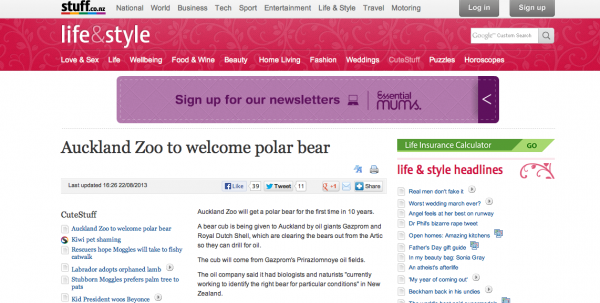 A bear cub is being given to Auckland by oil giants Gazprom and Royal Dutch Shell, which are clearing the bears out from the Artic so they can drill for oil.

The cub will come from Gazprom’s Prirazlomnoye oil fields.

The oil company said it had biologists and naturists “currently working to identify the right bear for particular conditions” in New Zealand.

It said it was likely the cub would be hand-nurtured under the supervision of Shell scientists until it was ready for transport.

Gazprom and Shell are relocating polar bears to 10 cities around the world.

It is part of their business partnership to drill for oil in the Russian Arctic.

The first polar bear was given to the Artis Zoo in Amsterdam.

Although the bears are being forcibly cleared in the hunt for oil, Gazprom put a patriotic spin on the exercise.

“The polar bear is a symbol of strength and purity,” said Timur Grigolyuk, director of strategic partnerships for Gazprom, Russia’s largest gas company.

“Like Russian oil and gas, she is a precious resource that we can share with all the world.

“Children are very happy with bears, and we want Auckland to have maximum happiness.”

Moving polar bears made sense because they had become a problem in the Arctic, Grigolyuk said.

Shell public relations officer Thijs Renner said: “Unlocking the Arctic’s resources is a tremendous challenge and one we are honoured to share with Gazprom. Our combined experience and innovation is set to produce unprecedented returns.”

…I’m still laughing so hard. How could they not realize that was a total hoax?