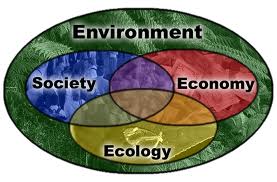 August 20th was Earth Overshoot Day — the day in the year when we stopped living on what the earth’s natural systems can produce in a year and started eating up natural capital. From now to the end of the year, we’ll be living beyond our ecological means, beyond the planet’s physical and biological limits. What we use up over the next four months will not regenerate or recover in time to get us out of trouble for 2014.

This year’s Earth Overshoot Day, calculated by the Global Footprint Network, has arrived two days earlier than last year, indicating that our appetite for natural resources continues to increase. Ten years ago, Overshoot Day arrived a month later, on September 22. In 1993, it was October 21. The result of this continued growth in our use and abuse of the planet’s natural systems is that we now need one and a half planets to keep us in the style to which we have become accustomed.

Where’s that half a planet going to come from? Last time I checked images of the earth from space, or poked around in maps of the solar system, there was no sign of another planet with comparable resources anywhere around. There might be one within a few tens of light years of our solar system, but we haven’t yet invented the means of getting there and returning stuff to earth at the sort of speeds that would be of any real help. One day, humanity may spread to the stars and the days of resource limitation will be over, but until that day comes — and there’s no sign of it outside the pages of science fiction — we really have no option but to find ways to live within our means.

Climate change is just one symptom of this problem. It’s the largest, most obvious, and the only one with a relatively simple cure: decarbonise the word’s energy systems. We know how to do that. There’s no need to invoke science fiction solutions or wave a magic wand — everything we need to know to take effective action is already in the public domain. All we need is the political will. Sadly, there’s no sign of that from the present New Zealand government, content as it is to don a five percent fig leaf while mining the hell out of our natural resources.

Dealing with climate change will cut our ecological overshoot significantly because it will reduce the stress we’re putting on planetary waste disposal mechanisms, but it won’t be enough to overcome resource depletion. To do that, we have to learn to manage natural resources so that they are at least maintained at current levels — or preferably, restored to former levels of production. And at the root of that is one basic issue: global equity.

It simply isn’t possible for everyone alive in the world today to live like the average New Zealander. There isn’t enough of anything to allow seven billion people to live like we do — with cars, big houses, gardens, pubs and restaurants, trains and boats and planes. And therein lies one of the really big questions we all have to answer: how do we share out the planet?

Politics is how we solve that problem, if we don’t want the solution forced on us in a torrent of climate change impacts, ecosystem collapses and wars over scarce resources. One answer is already on the table, and being enacted under the guise of sound economic policy around much of the developed world. That is to concentrate the world’s wealth into the hands of a very few billionaires and their bankers and political friends, and to watch as they pull up the drawbridge and retire into their heavily fortified keeps to fight off the barbarian hordes of people who have finally noticed that wealth never trickles down, and that a rising tide only lifts the superyachts.

The alternative — the only thing of any relevance to 99.99 percent of the global population — involves equitable sharing of resources and finding ways for everyone, all seven billion of us, to live fulfilling lives that are not defined by overconsumption. And that’s a really hard problem, because while our politicians are focussed on ekeing out yet more economic growth from a planet that can’t take any more, we’re heading in exactly the wrong direction.