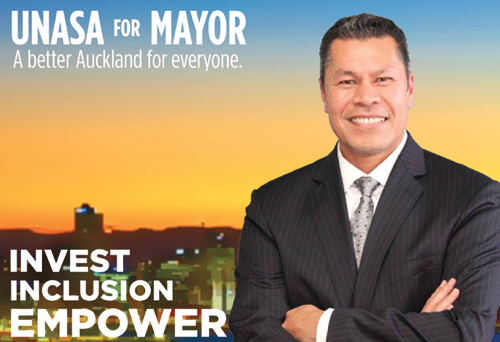 I don’t normally read the Herald but today a kind person politely offered me a copy at the café I was having breakfast at. Unsure of what to do with the thing I have major distaste for, I went to the back section and found the official notices of people duly nominated to stand for vacancies in the upcoming local body elections. Admittedly I looked for my own name to make double-sure that my nomination made it and alas, it did. My interest was then taken by the people elected purely by virtue of there being the same number of nominations as there were vacancies on Council, namely Orakei and Howick. Immediately I thought of my days at AUSA when you could tick a ‘no confidence’ option. Pity.

A recent RadioLive poll showed that Auckland’s incumbent Mayor Len Brown will be difficult to knock off his perch with close to 50% support. He is followed by Palino, Minto and to my pleasure and surprise, Uesifili Unasa. Palino has ‘cash to burn’ and is throwing it at this campaign so I expect him to register on the polls. Minto – a man I have enormous respect and admiration for – has a high public profile and I expect him to be doing as well as he is. Brown is the incumbent. He’s got huge support from those of us out south having been a ward councilor and Manukau Mayor. Our local Labour electorate committee of which I’m a part of also endorses Brown. But it’s Unasa’s performance that has caught my eye.

Unasa has publicly stated that he has little resource to commit to his campaign and is therefore running a grass-roots race through local, community networks. I attended his launch as a family relative and heard one of the most inspirational, passionate and moving speeches I’ve heard in a long time. It was reported in the media that the launch was so well attended that it had to be moved out of the auditorium and onto the street because of sheer numbers. I saw many Pasifika people arriving to the launch straight from church, dressed in Sunday-best. I also observed many of our older people – our parents and grandparents generations – in tears as he spoke. They were overcome with the emotion that one of their sons was seeking the highest office in the city.

Last week on Native Affairs, Toeolesulusulu Professor Damon Salesa of the University of Auckland said that Unasa’s candidacy was the first step in normalizing Pasifika participation in the electoral process. His suggestion was that whilst Unasa may not win the mayoralty election, his participation alone suggests a coming of age for Pasifika because it would be regarded as ‘normal’ for us to seek this office. Underpinning that idea is the belief that the wider Auckland population would now be ‘open’, ‘willing’, ‘acceptable of’ a non-Pakeha Mayor. And to use Unasa’s own words and really stretch the context he used them in… “a representation of the new Auckland.” Whatever our politics: Unasa is undoubtedly pioneering the way forward for Pasifika people, ethnic people and minority groups to have every confidence that they can stand just like anyone else, for the highest office in the city. On that note, the mayoralty has already been won – regardless of who ends up taking office on Oct 12.