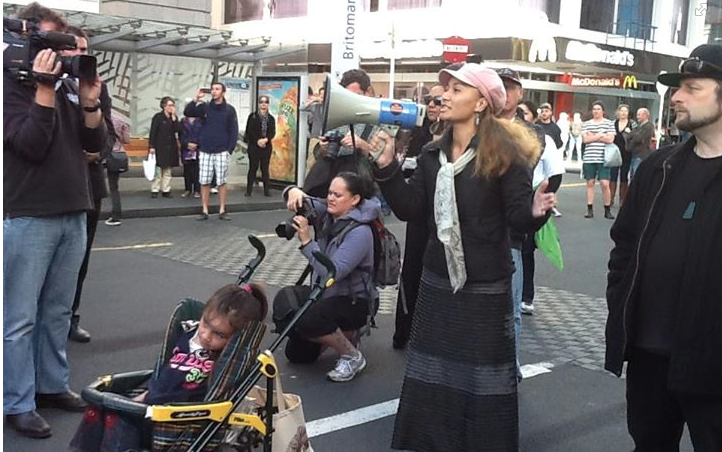 It was great last week to reflect on why my children are sometimes with me at protests. This reflection was sparked by a woman bystander at a Glen Innes housing protest last Wednesday who challenged me on it. I have already stirred people on my Facebook page where I posted my response to the woman poking her nose into my business. She was merely an onlooker and declared that I should not have brought my four year old daughter with me because it was too ‘noisy and scary’ for her.

“You think this is bad!” I jolted. “You should see how scared she gets when I lie her down under the house-moving truck.”

Jokes aside – I am not interested in defending myself as a parent. What the interaction with that onlooker initiated for me though were some reflections on standing up for our rights on the street and who we involve when we do that.

In the last week we have been hearing of the horror of over 700 protestors being killed by Egypt’s security forces. Blood spilled at protests around the world always reminds me of the duty I have to tramp our dissent here in a seemingly calmer Aotearoa. I have lamented previously about the challenge of mobilising our populace to give a damn and do what it takes to speak up in light of the freedoms we take for granted. I have also written on how activism takes many forms and does not consist solely of taking back the streets. But by gosh if I have not at least put protesting on the table for my own children as an avenue available to support a cause and raise their voice. Would that more parents had done the same for their children as mine did for me, we may even have 800 thousand less non-voters for a start. The day we have to consider losing our life on a protest march will be a sad one. I march with hunger also because these freedoms are being slowly eroded piece by legislative piece in this country. Ironically I did not have enough fight in me that day in Glen Innes day to alert the onlooker to the urgency with which we must fight for these very freedoms. That woman might be a lost educative cause, but for my children there is hope. Besides, I had more fun leaving her with a gruesome image and satisfying her assumptions on my bad parenting.

The blood of children killed in wars and protests around the world leaves a lingering ‘out damn spot’ Shakespearean stain on my own mothering hands. This last week it transpired that United States Army Private Bradley Manning faces 90 years prison for whistle blowing on the inhuman bloodlust activities of his army. Manning exposed to the world some shocking footage equating to when American soldiers go – well – like American soldiers. Readers can save their “not all American soldiers are like that and many other countries destroy children” for my middle bird finger. None of that eradicates a single bombed up baby. Turning my daily survivor guilt into profound appreciation for the most damaging noise my sweet children’s eardrums have ever suffered being fireworks shows and not deadly bombs, is an ongoing effort for me. Part of the way I seek to repay my gratitude for having live, healthy babies in their war-zone free beds every night is to involve them in my ongoing stand for social justice. Sometimes this means they are on the street. I wish every parent in the world had only to negotiate their child observing a bit of noise and passionate protest drama in our global quest for a better world for them to play in. My thoughts are constantly with all those parents whose children are subjected to big noise and lights in the sky that are impending doom and nothing to do with sparkly pretty fireworks.

The four year old child I had with me at the Glen Innes protest is also the daughter who is with me the most, being the youngest and not yet in school. She is a delightful, feisty and certainly chaotic and she is learning, as are all my children – that her Mama has a voice. This is the most important education that I can give to my daughters in particular as they are planted in a world that seeks to supplant women from our rightful leadership positions at all levels. She will be a damn Goddess of her own divine making if it is the last thing I swear to. Mamas around the world are designing their daughter’s learning’s in whatever way they can to pay heed to this Goddess making responsibility. This blog posits some of the lesson plans I can offer to the collective divinity of women cause.

I end by throwing us back to my own parents time and their meeting literally on the steps of Parliament in the 70’s as teenage urban Māori ‘radicals’ as they were termed back then. Sometimes my children are with me simply out of practical necessity. There is not always another option and the only way that I can fulfil my contribution is to have them march alongside me. I am sure it was the same for my own parents. I have childhood visions of my father with megaphones speaking his truth to crowds of people in Dunedin where some of my childhood was spent. I was so young I mostly cannot remember what his words were about. I certainly remember noise and passionate fiery protest drama. It may have even been slightly scary at the time. But I grew up understanding that it was important to my parents to speak up for justice.   What terrible parenting.

Thanks for nothing Mum and Dad.