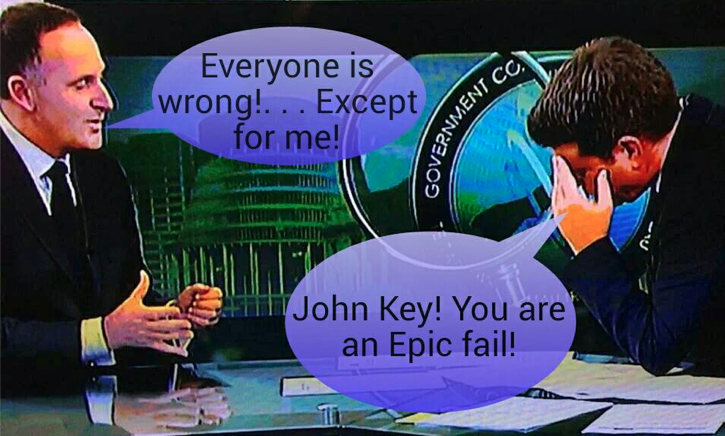 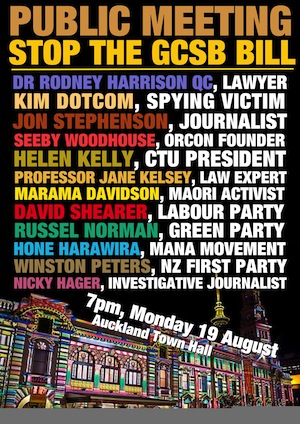 With the notable exception of John Campbell, the mainstream media have been utterly pathetic in holding the Prime Minister to account for his outrageous misrepresentation of the GCSB and TICS (Telecommunications Interception Capability and Security) bills currently before parliament.

John Key has been keen to talk about anything other than the GCSB bill but then finally turned up for an interview on Campbell Live and used a mixture of bluff and bluster to tell the country the new GCSB bill is merely a tidy-up of the old bill which had led the GCSB to break the law. When confronted with an avalanche of criticism that the bill allows for wholesale spying on New Zealanders Key says everyone else is wrong and he is right.

The mainstream media went into something of a frenzy a few weeks back when they learned a journalist’s movements around parliament and cellphone records had been passed over to a Prime Ministerial investigation without the permission of anyone involved. It’s a pity they couldn’t find the same energy for the much more serious issue of the introduction of across-the-board spying on New Zealanders by the GCSB.

This conflict has dragged on for many weeks but no-where has there been a serious journalistic critique of the claims made by either the Prime Minister or his critics.

This week it’s been left to Dr Rodney Harrison QC and Dame Anne Salmond to point out the Prime Ministers carefully spun misrepresentation of the bills. Rodney’s piece in yesterday’s New Zealand Herald is here:

Dame Anne Salmond’s leading letter in the Herald on Saturday (not online unfortunately) also takes the PM to account where journalists have failed.

It’s more important than ever that we hold the Prime Minister to account at the URGENT PUBLIC MEETING TO STOP THE GCSB BILL – AUCKLAND TOWN HALL THIS MONDAY 19THAUGUST AT 7PM.

There’s nowhere else to be Monday night.