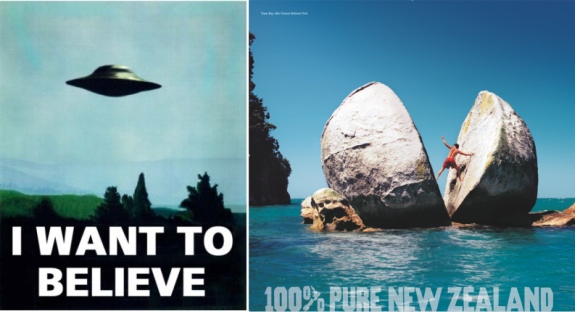 In November 1979, as many New Zealander’s will never forget, an Air New Zealand DC10 was tragically lost on the slopes of Mt Erebus.

A Royal Commission of Inquiry, led by Justice Peter Mahon absolved the pilots of responsibility, attributing the cause to the airline changing the flight’s co-ordinates without telling the crew, combined with a malevolent trick of the polar light. During the Commission, he noted that from the airline, he had been forced to listen to ‘an orchestrated litany of lies’. Political response to the verdict was swift and brutal. The Prime Minister of the time, Robert Muldoon took the case to the Privy Council, which found that Mahon had acted beyond his brief when coming to his conclusion. (It didn’t absolve Air New Zealand). Mahon was destroyed by the process and died soon after.

Three decades later, another major New Zealand company, the ‘national carrier ‘ of Brand NZ if you like, has met with disaster. Mercifully, no lives have been lost. But as with Erebus, some system failed with catastrophic consequence and, if we are to re-establish our reputation for food safety in markets throughout the world, indeed, restore the country’s image, a full, independent inquiry must be held. Perhaps Fonterra’s much-lauded scientists should turn their microscopes on the dairy giant’s corporate culture, for therein lies the toxin. One hopes an independent inquiry  will not encounter the same political interference meted out to Mahon’s investigation and conclusions.

It should also be remembered that prior to the accident, Air New Zealand had mounted a publicity campaign trumpeting “Nobody Does It Better.” It was immediately withdrawn after that tragic day. Today, the 100% Pure campaign has that hubristic echo. As newspapers around the world point out with a breath-taking frankness, New Zealand is not 100% pure. If we don’t confront head-on and fearlessly the truth and take appropriate steps to fix what is so clearly broken, we step into the future as a nation deluded, fooling no one but ourselves. In that circumstance, we would get what we deserve. Nevertheless,  John Key defended our 100% purity: “it’s a marketing slogan, not meant to be taken literally.” he said. Like National’s ‘Building a brighter future” one presumes.

The National Party faithful met in Nelson. With polls numbers still high, it was a back-slapping affair. Judith Collins’ bare-face denial’s of prime minisetrial ambition were even a thigh-slapping affair, so transparently false were they. And discussions of a new flag, surely the most pressing issue facing us all, met with no little support.

The PM’s keynote address was worthy of Cirque-de Soliel, so many plates were spinning in the air. Here’s a section for your entertainment:”

TDB Recommends NewzEngine.com
“Under MMP, all elections are close elections. And they are not just about National versus Labour, but about the centre-right versus the left. And it’s clear for everyone to see that Labour has hitched their wagon to the Greens, lurching the opposition to the far left. Make no mistake, our opposition comes from the far left of politics. The Greens are leading Labour by the nose. It’s important that New Zealanders understand what a Green-dominated government would look like. They want to tax you more, rack up more debt and make you work two more years before you can retire. They want a government department to run the entire electricity system, just like it did in the old days when we had blackouts. They want to stop oil, gas and mineral exploration that would create jobs and growth. They blame foreigners for all the ills of the country when our future prosperity lies in being open and connected to the rest of the world. They even characterize businesses relocating jobs from Australia to New Zealand as ‘deeply worrying’. And they take petty, opportunistic political positions on national security in the face of the obvious need to clarify the GCSB law – a law they passed in the first place!” My head is still spinning!
Petty, opportunistic political positions on national security in the face of no obvious need to clarify the GCSB law is National’s stance on the matter more like it. The Human Rights Commission, the Privacy Commissioner, The Law Society and the New Zealander of the Year, hardly petty, opportunistic and political, have lined up in opposition along with more experts than you can shake a stick at. But, according to National, they are all wrong. According to Chris Finlayson, they are all wrong. But he is right. I wonder? This Government is clearly ‘unsinkable’, for they tell us so themselves!
And as for “our future prosperity lies in being open and connected to the rest of the world”, National needs to read every single paper in the world, for according to them, we have not been open to the rest of the world and to say we are in fact disconnected would be the understatement of the universe. But we must not let facts get in the way. Those at the conference could be treated by a glass of “PM’s Pinot Noir’, grown on an Otago vineyard of which the PM has no knowledge. He knows only of a vineyard in Otago. People were pulling split hairs from their vino all night!
So extraordinary has this week been, I’ve taken to writing a little satire at the expense of our beloved leaders, for a little therapy. I do it to save my television, for this week, I’ve thrown so many things at the box, I fear it’s going to be smashed to (Nick) Smithereens! Speaking for a us all, a hapless waiter at Bellamy’s served several Ministers of the Crown. Here he is, soldiering on with Judith Collins (who has no prime ministerial ambitions, let it be remembered!).
Waiter: Good evening Minister, can I take your order?
Judith Collins: I’ll be the judge of that!
Waiter: Yes Ma’am of course.
Judith Collins: And stand up straight when you’re addressing me!!
Waiter: Yes Ma’am
Judith Collins: Do you think Baroness Thatcher had to put up with this sort of nonsense?!?
Waiter: No Ma’am.
Judith Collins: I think not. God rest her soul!…
Waiter: Indeed Ma’am. Would you care to…
Judith Collins: How dare you interrupt me when I’m talking?!!!?
Waiter: Please forgive me…
Judith Collins: I’m not Helen Clark you know!!!
Waiter: No Ma’am
Judith Collins: I mean really!!! You think you can just walk up to me and start talking?!!!!?
Waiter: I am a waiter, Ma’am.
Judith Collins: Don’t answer back!!!! I’ll have you in court before you can say David Bain is innocent and deserves compensation!!!!!
Waiter: Yes Ma’am
Judith Collins: Now look here, whatever your name is: I’ve just about had enough of your lip!!!! Really!!!! You give people the vote and suddenly everyone’s got an opinion!!! You think this place is a democracy or something?!!?
Waiter: No Ma’am
Judith Collins: I think not!! Now give me that menu!!! Right!!! I’ll have the wings!! Right ones only!!! Got that?!!? Don’t answer!! Just write!!! Then I’ll have the roast Mallard with crushed balls on the side!!!
Waiter: Yes Ma’am
Judith Collins: And I’ll have a Bloody Mary!!!!
Waiter: Yes Ma’am
Judith Collins: Hold the Mary!!!!
Waiter: Yes Ma’am.
Judith Collins: Now get out of my sight!!!!
Waiter: Yes Minister
Well, it made me laugh. And when it comes to political parties that make you laugh, you’ve got to hand it to National: Nobody Does it Better!