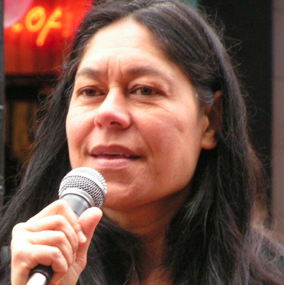 NZ, Wellington, 10 August –  Ariana Paretutanganui-Tamati, political and community activist, today launched her candidacy for the up-coming Wellington Regional Council local body elections. Ariana will be standing under the Mana Party banner – a Party she has supported since it’s inception.

Ariana’s campaign platform was based on the issue of free water for domestic users, and opposed metering and charging. Her policy postion stated,

Ariana’s other concerns were also emblazoned on her placards, dotted around the marquis which her campaign team had set up adjacent to the water fountain; Ariana spoke to the crowd on the problematic issue of allowing Anadarko – which had been involved in the disastrous 2010  Gulf of Mexico oil spill – to prospect-drill of the Wellington coast.

Ariana said New Zealand had no means by which to contain an oil spill-disaster along the magnitude of  the Deepwater Horizon event in the Gulf of Mexico.

“The thing is,   that they didn’t actually clean it up. The oil is still at the bottom of the ocean. They used a toxic chemical to sink the oil down so it was out of sight, out of mind.”

The coastal areas were still polluted, Ariana said, and this was affecting sealife in the region as well as  people’s health.

“We must not allow Anadarko to drill of the south coast of Wellington!”

There were cries of “Hear, hear!” from some in the crowd at that point.

In between speaking, Marama Te Kira  entertained  the crowd and passers-by with her music and singing, Ariana, and her Campaign Manager, Warwick, talking to a member of the public. The woman listened attentatively and said she agreed with a great deal of Ariana’s policies. Another vote, hopefully?

Ariana talking to two well-wishers who had heard about her campaign launch on social media, and decided to attend,

Ariana made a clear  distinction between herself and Fran Wilde, who supported user-pays with water; With a crowd forming around Ariana, who carefully explained Mana’s policy to keep water in public ownership for the benefit of all, she offered people water from two containers. One was free, the other cost money.

Everyone took the free water; Ariana talking to another member of the public;

A message to the public that, despite a lingering recession, a tiny minority are doing very well – while everyone else either struggles or is just getting by;

More of Mana’s messages to the public;

Ariana, surrounded by supporters and members of the public, fielding questions about her candidacy; Even left-wing, anti-establishment, pro-people activists have to “press the flesh” with potential voters. These two had a good natter on Ariana’s policies;

Another vote for Ariana from this young chap, Brochures given out to passers-by (see image at top of page for detail), Addressing the crowd and passers-by; Ariana tlold the public that a government advisory group, Chaired by Wellington Regional Council chair Fran Wilde, advocated local bodies adopt a user-pays policy for drinking and waste water. She said this would involve compulsory water metering for every household in the Wellington region.

Ariana said there were other ways to reduce water usage such as education and fixing up the various leaks around the city; “We fundamentally and strongly oppose any privatisation of water.” She added, “this is part of a bigger agenda to commercialise our essential services.”

Ariana reminded people that this had already happened with our electricity supply and our power bills had skyrocketed since the 1990s.

Ariana compared the rise in water costs over the same period, saying it had risen by only 17% saying,  “So this is what happens when you start to commercialise essential services. We need to ensure to ensure that these services are publicly managed for the public good, not for profit.”

Ariana said that selling off essential services had only contributed to people’s hardship and many were struggling to pay for their power bills. She said the same would eventually happen for water,

“If we start selling  of our water, making  people pay, then people on low incomes and who are poor, are going to be forced to make decisions about whether or not they give  their children  a bath… or   whether or not  they can put on the power to warm their house.

We have to make sure Councils are run for the public good – not for profits!”

Ariana said she would “work her butt off” to keep water free for every household.”

Ariana directed a simple question at these young men who had been listening intently; do you think water should be kept in public ownership or privatised?

All three laughed and answered, “keep it public!”

Who said that young folk don’t understand or care about the issues?

* Use must be for non-commercial purposes.
* Where purpose of  use is  commercial, a donation to Child Poverty Action Group is requested (or a donation to Ariana’s campaign fund).
* At all times, images must be used only in context, and not to denigrate individuals or groups.
* Acknowledgement of source is requested.

Radio NZ: Gear to cap oil rig has to be shipped from

The Daily Green: The Gulf of Mexico Oil Spill by the Numbers