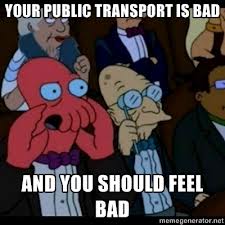 As much as I am aware that there are serious long term issues with population growth and infrastructure in New Zealand’s biggest city, I love to watch Aucklanders complain about their public transport almost as much as I love the fantastic thinking going on to try and fix it. The bus that operates on a constant loop around the heart of the city, and the digital displays telling you which buses are coming when? These are some kind of weird utopian dream at the other end of the country. Here in Dunedin, one of our main downtown bus stands hasn’t had a visible timetable for months in any form. The printed version of the timetable is a design nightmare. It is not uncommon before 7am to see three empty buses in convoy around the University Campus. One pair of routes has two buses following each other 90% of the way, with barely enough passengers to fill one, all day every day of the week. Despite at least five years of claiming it is in development, there is still no way to track arrivals and departures of the fleet of buses in real time. We are literally decades behind the eight ball in this regard.

You could be forgiven for thinking that they were actively discouraging people using the service so that they had an excuse to stop providing it. It’s encouraging to see that the Otago Regional Council is reviewing the state of our ailing bus service, albeit at the request of a Central Government that isn’t particularly interested in public transport ideologically. I would certainly be keen to see the terms of reference. The National Government have shown how little they care about decent public transport by throwing billions of dollars on the bonfire of vanity that is the Roads of National Significance. The ORC have shown how little they care about improving things locally by the complete inertia that grips their attitude towards it. To get more people on the bus, we need to make it an affordable and efficient way of getting around Dunedin. Currently, it’s neither, and nothing short of a complete overhaul will change this.

Across town, meanwhile, the Dunedin City Council are working on a Draft Transport Strategy in which public transport is conspicuous by its presence. There are a lot of noble goals around reducing private motor vehicle dependence, by encouraging people to walk and cycle more, and creating an “affordable, accessible, reliable, pleasant and well-utilised public transport system”. The trouble is, the DCC don’t have any control over the bus system, the ORC does. For our city planners to be in charge of roads, parking, cycle lanes, installing and maintaining bus shelters but then have to take the buses they are given is total madness. It is a difficult enough task to balance these inputs and try and come up with a plan that works for our people, and our planet, without being handicapped from the beginning by such an obstacle. The ORC’s own review recommendations are set to be implemented by 2015, far enough out for one of them to be the transfer of operations to the DCC, where it belongs.