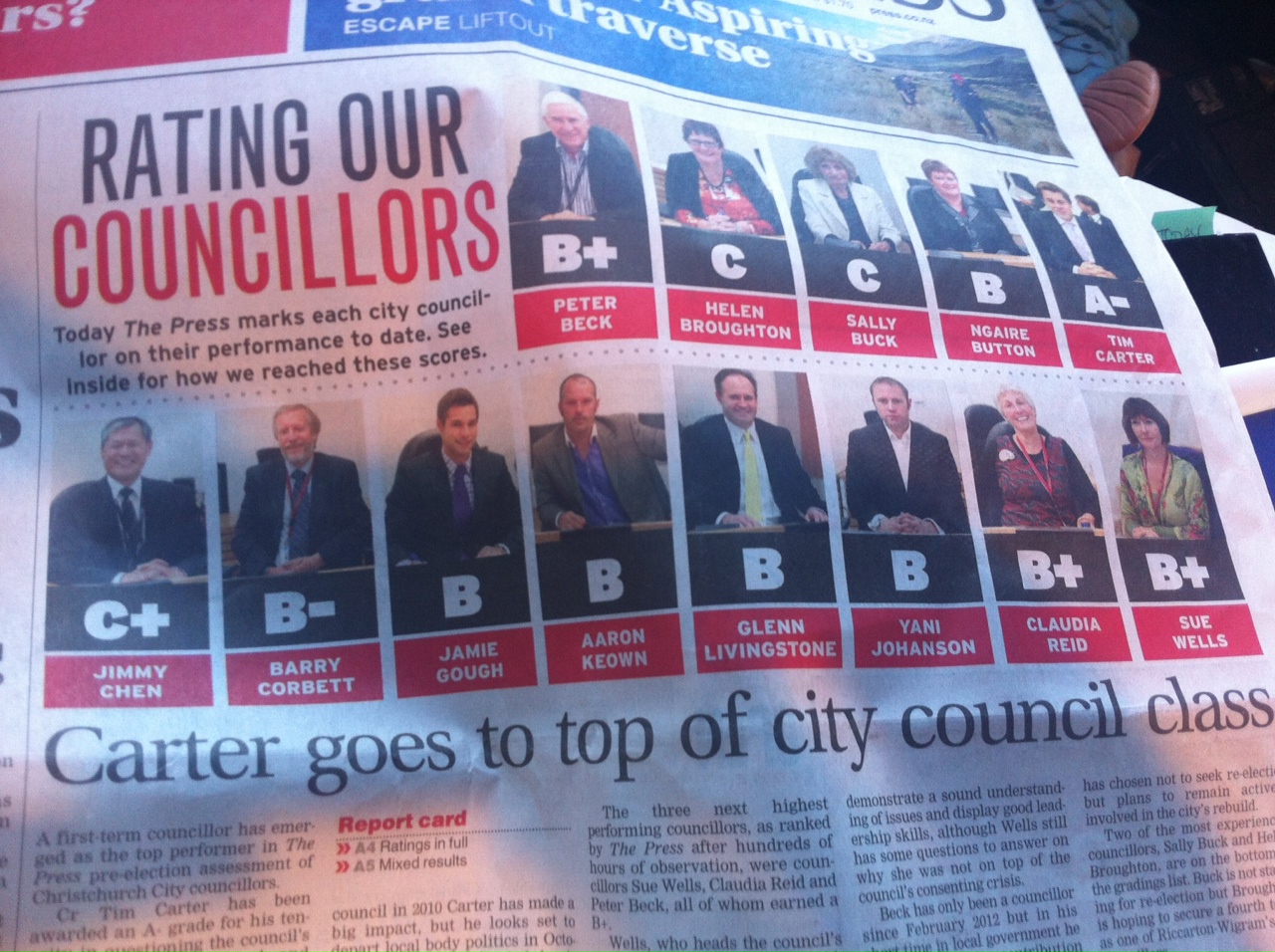 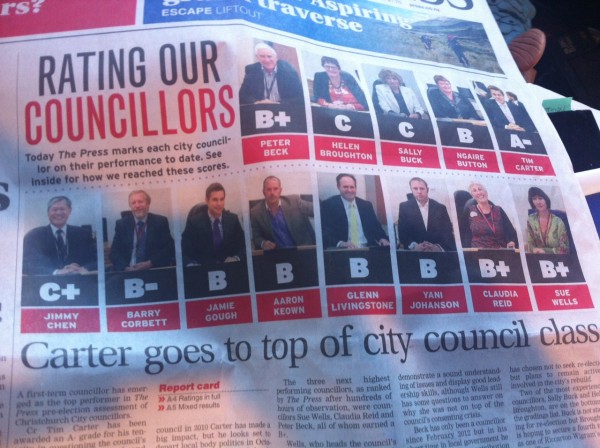 The Press has brought out it’s triennial “rate the councillors” article, in which they boil down almost 3 years of work into a simplistic grade, slap it on the front page of the paper, and get on with other trivialities. While I think it is a great idea, it’s application leaves a lot to be desired. For many, if not most, citizens of Christchurch, this is the most in-depth reporting that they will see of their elected representatives. It can make or break a councillor’s re-election campaign. During the 2010 campaign, I can recall candidates with good grades taking a copy of the paper to meetings to wave in front of the public – whilst those who scored poorly took it up with the paper’s editors, before being ushered out the door by the ballot. This exercise holds a lot of power – and yet it’s terribly flawed.
For one, I think if you asked almost any person in the country to name the worst performing council in the land, they’d respond “Christchurch City Council”. While the last term has been almost unprecedentedly challenging, the CCC has failed, absolutely. The consenting debacle is the most obvious example of this. Yet the Press has given all of the councillors pass marks. How can all of the councillors “pass” when the body they steer the direction of has failed? Are we to believe that they were innocent passengers watching helplessly as the ship went full-steam ahead into an oversight iceberg – and if that is the case, then why are we paying them?
While controversial CEO Tony Marryatt is on “gardening leave”, we can still look back to the councillors who first supported his re-appointment, and then those who approved a pay-rise for him. I’d argue that those councillors who voted in favour of both those motions – Ngaire Button, Barry Corbett, Jamie Gough, Aaron Keown, Claudia Reid, Sue Wells  – would get a fail. They supported Marryatt getting a longer contract, then gave him more money to do it. They must shoulder much of the blame for his incompetence. Further to this, Sue Wells is the chairperson of the Planning Committee, which is responsible for oversight of the council’s consenting division. She admitted at council that she had some “baggage” from the consenting debacle – yet the Press seems to have seen fit to give her the second highest grade, a B+.
Much of what goes into these grades appears to be how much the reporters personally like the councillors. Peter Beck – a lovely man, but a largely ineffectual councillor who has announced he wont be running again – gets a B+, despite not really having any achievements to his name. The other councillor from Burwood-Pegasus, Glenn Livingstone, has fought for his constituents and got stuck in to some quite tricky issues. He gets a B. Tim Carter gets the highest mark – an A- – for “repeatedly attacking the leadership of Parker and Marryatt”, while Yani Johanson gets a B because of the “serious tension between him, the mayor and the senior council”. I’d argue that these two are both the best performing councillors, and both deserve an A-, or higher. But it’s interesting that when Johanson opposes the mayor and CEO, it is perceived as negative, whilst when Carter does it, it’s a positive.
Possibly the most worrying thing about this article is the way they have treated Jimmy Chen. Around 8% of the population of Christchurch identify as of Asian ethnicity. One of our 13 councillors is Asian, which translates as roughly the same percentage (7.6%). The Press acknowledges that he works very hard and is always well prepared for meetings – of which he has missed 4 in his term. “His heart is in the right place but the biggest problem for Chen is that English is his second language and he often struggles to articulate his points clearly and precisely.” The thing is – Chen speaks English. I find him hard to understand at times, but whose problem is that; his, or mine? The guy is working incredibly hard – as the Press themselves admit – and is doing so in his second language. To give him a C+ grade because the reporters find it hard to understand him – not because he is doing a bad job or not attending meetings – is deeply offensive, and does nothing to shake off our city’s reputation as a whites-only old-boy’s club. He – and all the other councillors, for that matter – should be judged on their record, not whether they have a foreign accent. I hope that the people of Christchurch can see through this facile, racist exercise when they send in their voting papers in October.