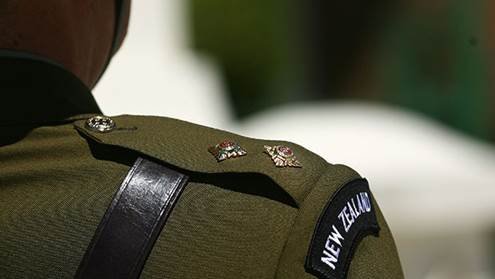 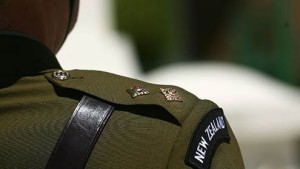 THE NEW ZEALAND DEFENCE FORCE is no friend of democracy: never has been, and, as presently constituted, never will be. The Army, Navy and Air Force do not exist to serve the people of New Zealand, they exist to defend the Crown.

Most of us regard the Crown as being synonymous with the State – but this is a common misapprehension. The Crown is not an institution, it is the symbol of a single individual’s right, and the right of all those bound to her by oath, to rule over the realm of New Zealand.

In plain language, our armed forces are not answerable – as many people of good will, including Dame Anne Salmond, suppose – to our democratically elected representatives, but to their Commander-in-Chief, Queen Elizabeth II, or, in her absence, to their old boss, Sir Jerry Mateparae, New Zealand’s current Governor-General.

To become an officer in the NZDF, one must first be commissioned to that role by the Sovereign. Her Majesty’s officers are, of course, already bound to her service by solemn oath. In sharp contrast to their American comrades-in-arms, however, New Zealand service personnel are not sworn to “uphold, protect and defend” New Zealand’s democratic institutions. Their oath is a pledge of unquestioning loyalty to the Crown.

These are the words that every member of the NZDF must utter before putting on a uniform:

“I, [name], solemnly promise and swear that I will be faithful and bear true allegiance to our Sovereign Lady the Queen, Her heirs and successors, and that I will faithfully serve in the New Zealand Naval Forces/the New Zealand Army/the Royal New Zealand Air Force [Delete the Services that are not appropriate], and that I will loyally observe and obey all orders of Her Majesty, Her heirs and successors, and of the officers set over me, until I shall be lawfully discharged. So help me God.”

We, the citizens of New Zealand, don’t get a look in.

The widely accepted fiction that our armed forces are under the effective command of the civil power (that is, the Cabinet and the House of Representatives) is not one the NZDF is at all anxious to contradict. To do so would expose the thoroughly hierarchical infrastructure upon which our representative institutions have been hung, and which their colourful democratic bunting so conveniently obscures. Only very rarely does the armed forces’ deep loathing and contempt for democracy provoke a confrontation between the military and the civil powers; but when this happens it is almost always the civil power that steps back.

Perhaps the most dramatic example of the studied contempt in which the military has traditionally held the civil power came during the First World War.

In 1918, Paddy Webb, the West Coast mining leader and socialist MP for Grey, was court-martialled for refusing military service and deprived of his parliamentary seat. When he appealed to the Military Service Board that, as an MP, he should have been exempted on the grounds that he provided an ‘essential service’, he was coldly informed: “The Board does not think that Parliament can be regarded as essential. It thinks that men at the head of affairs are capable of governing the country.”

The “men at the head of affairs” were again deemed more capable than a mere MP in May 1987 when Colonel Sitiveni Rambuka and elements of the Fijian armed forces overthrew the democratically elected left-wing government of Dr Timothy Bavadra.

The mere MP, in this case, was David Lange who, as the Prime Minister of New Zealand, had entertained (for the few salutary hours during which an Indian Fijian hijacker held an Air New Zealand airliner’s flight crew hostage at Nadi Airport) the clearly mistaken belief that he had a role to play in the deployment of New Zealand’s armed forces. His instruction that a C-130 Hercules, packed with New Zealand troops, be dispatched “to act as required to protect New Zealand’s interests in Fiji” was studiously ignored by the Chief of Defence Staff.

In frustrating Lange’s attempt to supply the democratic forces of Fiji with an armed force capable of ending Rambuka’s coup d’état, the most senior officers of the New Zealand armed forces were able to reassure the Fijian military high-command (and their undeclared backers in Washington and Canberra) that they would never have to look over their shoulders if it again became necessary to strangle social-democratic reform in its South Pacific cradle.

The NZDF’s propensity to define New Zealand’s foreign policy quite independently of its supposed civilian masters has only once been definitively thwarted in this country’s recent history. The passage of the fourth Labour Government’s anti-nuclear legislation, and the consequent collapse of the ANZUS relationship, occurred in circumstances of considerable confusion and (if Lange’s Departmental Head, Gerald Hensley, is to be believed) deception.

Once the deed was done, however, it is indisputable that the NZDF did everything within its power to draw New Zealand back into the United States’ imperial embrace. Lange himself, though he was happy to bask in the glory of the anti-nuclear movement’s victory over the MAD logic of nuclear deterrence, was, behind the scenes, increasingly anxious to placate his military officers’ rage at being dishonoured and humiliated in the eyes of their Anglo-Saxon brethren.

Much has been made recently of Lange’s foreword to Nicky Hager’s Secret Power, in which he claims that the author had been told things “that I, as Prime Minister in charge of the intelligence services, was never told.” Hensley disputes this claim with considerable acidity, writing in his memoir, Final Approaches, that: “Lange was regularly briefed by me and despite his later claims knew exactly what was involved and why the station was needed if we were to keep up with technological change.”

Hager’s latest book, Other People’s Wars, confirms this covert campaign to refasten the ties that bind New Zealand to the United States and its English-speaking allies. He sets out in the book’s opening chapters how, very early on, elements within the NZDF took the (unauthorised?) initiative in securing a place for New Zealand military personnel in the invasion of Afghanistan.

And now we learn, once again through Nicky Hager, that the NZDF availed itself of US surveillance technology in keeping tabs on Jon Stephenson, New Zealand’s award-winning war correspondent, whose reporting from Afghanistan has exposed just how completely the rift between New Zealand’s and America’s armed forces has been healed.

Over the next few days we can expect to see the civil power make a fine show of reasserting its democratic oversight and control over a wayward military. It should not be taken seriously. Because, at the same time that the Defence Minister, Jonathan Coleman, is slapping down Lieutenant-General Rhys Jones for compromising our civil liberties, the head of New Zealand’s intelligence community, Prime Minister John Key, will be shepherding through Parliament a bill which enables Her Majesty’s armed forces to maintain a watching brief over every subversive – or merely conscientious – journalist in the entire country.

David Lange may, or may not, have known exactly what was going on at the Waihopai Spybase, which he and his Finance Minister established without so much as an authorising Cabinet Minute in 1987, but in the foreword to Hager’s Secret Power he quite rightly queries the true allegiances of the men and women who manage our covert defences. That he and his ministers knew so little, he said, “raises the question of to whom those concerned saw themselves ultimately answerable.”

One thing’s for certain: it isn’t you or me.