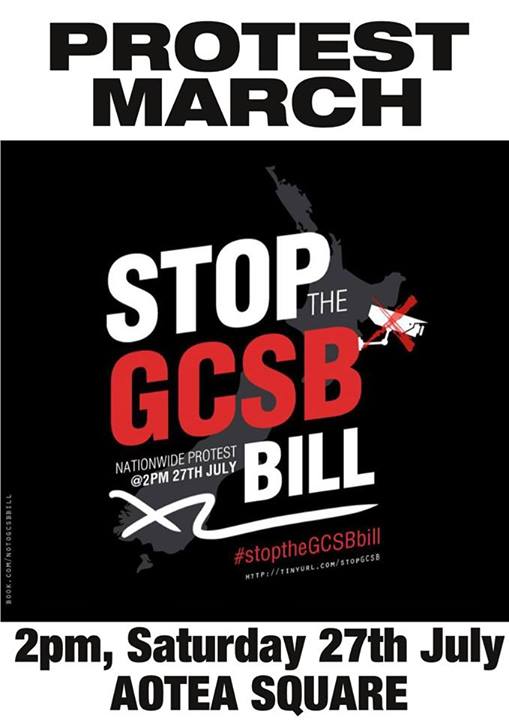 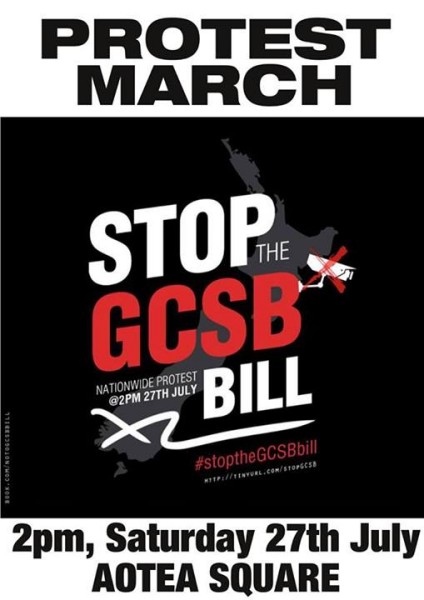 I was fortunate to be able to attend the well organised and inspiring urgent meeting against the GCSB Bill on Thursday night.  So, hats off to the organisers and great to see the live streaming through this site – I love the technology stuff (and very apt, given the topic, allowing for additional surveillance of the issues).

I also use the word “inspiring” deliberately.  It was.  I think that anyone in the room would agree with me.  There was a palpable energy, an energy that I have been desperately searching for, and found on that cold mid-winter night in Owairaka: the energy of collective dissent.

In paraphrasing Dame Anne Salmond on Thursday night, we need to remind our politicians that they are elected to represent us, not to rule us.

This is our Muldoon moment – again borrowing from one of the speakers, the Chair Sir Edmund Thomas – but this time there is no Marilyn Waring to cross the floor.  It is up to us to take that challenge to stand up for what we demand: an effective and representative parliament accountable to all New Zealanders, not just the influential elite with boxes at Eden Park.

For me, the meeting on Thursday night was part of a genuine and developing social movement in Aotearoa.  Sure, this social movement has been around in differing forms, but Thursday represents a vital moment in confronting this exceptional political arrogance.

Why?  Because, for real and substantive change to occur, dissent in and of itself is not enough.  To achieve that change, we need to mainstream dissent.

Thursday is part of this.  Thursday saw us mainstream (through a livestream…) the wider dissent at this government’s rule by fiat.

All of Thursday’s speakers were excellent.  Each was articulate, prepared, intelligent, and rigorous in opposition to the proposed legislation.

Without meaning to detract from the other speakers, I felt that Dame Anne Salmond in particular spoke to me as a citizen and given my own concerns around a lack of accountability in this government.  She reminded us as to the importance of our fundamental rights, how these were fought for by our forbearers, and how our democracy will have failed us if this Bill is passed.

Well, the New Zealand Law Society clearly contains avid readers of this blog.  The report highlights the Law Society’s concerns around the erosion of the protection of fundamental human rights contrary to the rule of law and the over-reliance by our Cabinet on executive orders (that is, essentially making laws that do not go through the full parliamentary legislative law-making process).

Like the Law Society, I am very concerned at the amount of legislation being passed under urgency vitiating proper public engagement.  For, what is a democracy without robust debate?  There is no democracy without opinion.

It is undeniable that this government is completely dismissive of the ideals of an accountable and participatory democracy.  We’ve seen the removal of judicial review rights, a disproportionate infringement on the right of freedom of expression to appease corporate interests, threats against the Human Rights Commission when it does its job, and an attempt to extend almost unfettered surveillance of our own citizens.

The social movement present last Thursday night needs to counter this.  But, for it to work, this movement needs to be inclusive and creative.

Not only do we need to mainstream our dissent, but we need to see a new form of activism engaging a younger (some might incorrectly say “more apathetic”) group of New Zealanders.  What are we doing to reach those people?  How do we, in Aotearoa, use online activism?  Where is the App that thousands can use to tweet/email their MPs at once?  Where is the platform for young New Zealanders to learn that they have power in a democracy?

These are questions that require an activism beyond mass protest.  Protest is essential, and I endorse and support the nationwide protests this weekend, but I also feel we need to look to new, creative means of dissent.  As always, I am an inherent contradiction: we need dissent, we need to mainstream it, and then we need to create a new form of it!