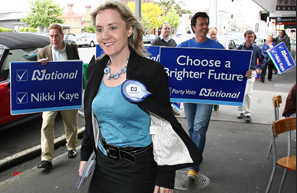 Clarke Gayford is the perfect canary in the coal mine in terms of political awareness. He is the drive host on More FM and is a member of the very disconnected masses who made the last election one of the lowest voter turn outs in a century.

He’s never been to a protest march, but the GCSB spy powers have concerned him so much that he is engaging directly with his MP, Nikki Kaye, and he is marching on Saturday.

When the politically turned off are tuning in, National strategists who rely on NZers staying asleep should be deeply concerned, here is his letter…

With the alarming links between the GCSB bill and the NSA program in the states – the ramming of this policy feels to me like it’s the US trying to find another way to sneak a Nuclear Ship into our ports.
Last night’s speakers in Auckland against this railroading of dangerous legislation were incredible.
The people are not happy.
Remember there are protests nationwide at 2pm tomorrow, I cant encourage you enough to show your face.
Or write to your local MP – send them a message, tell them how you feel.
Liking this post while appreciated, is not going to do anything, you’ve got to make an effort, and really its a small effort weighed next to what we stand to lose.
I’ve just emailed Ponsonby Nat MP Nikki Kaye, it seriously took 5 minutes of my time.

Hi Nikki,
This is the first time I’ve written to an MP, my disposition to politics like so many kiwis is fairly apathetic – taking the stance – let’s let you guys represent us.

But somewhere along the way it feels like your party has lost touch with the actual realities of what NZers want and need.

My main concern shared by everyone in this area that I’ve spoken to – is what have we done wrong?? – how have we shaken your trust in us so that you feel the need to support a bill which allows the wholesale removal of our privacy?? Where is the case you guys should be making for this??

I’m well aware that there are 2 sides to every story, but I have tried and tried to understand why we need this in a country just recently voted the safest in the world.

Can you tell me why…

A: Such broad-sweeping access needs to be given, when we already have a robust functioning system in place?

and B: Why is this being rushed, without a proper thorough inquiry?

Surely alarm bells must be going off with the criticism that has come from such respected independent quarters on this bill?

The NZ Law society
The Privacy Commissioner
The Human Rights Commissioner
Dame Anne Salmond the NZ of the year.

It must have been even more disconcerting to you that the PM, rather than addressing these, has sort to criticize the applicants and process, in one case even offering a thinly veiled threat to their funding?

That’s just not leadership to me, and it shouldn’t be to you as well.

I believe you guys are making a huge mistake, one that states quite clearly a lack of trust of the people you’ve been elected to represent.

This is going to hurt you in next years election. Not only will I not be supporting, you will have stirred my apathy into campaigning in the opposite direction, and I know I wont be alone.

This whole process is just not how we do things in this country. You’re a smart person, I’ve heard you speak, surely it’s difficult knowing this and still supporting it?, maybe its time to speak out?