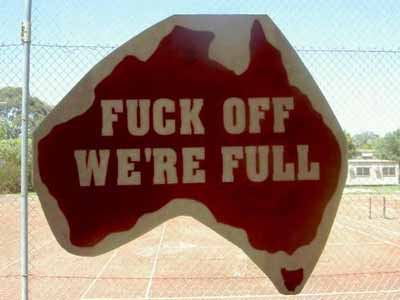 The vile stench of racism is never far from Australian politicians keen to exploit community ignorance and fear about asylum seekers landing on their shores.

Former Australian Prime Minister John Howard was an early exponent with his infamous lie that asylum seekers threw their children overboard in an attempt to circumvent Australian immigration. It was left to a foreign vessel Tampa to take on those refugees while Howard fanned the flames of race hatred against these defenceless people. His government called them “queue jumpers”, “illegals” and a threat to Australia’s borders. These were just more lies to be fed to a gullible, fearful public.

Of the four million people who arrive in Australia each year only a few hundred arrive as asylum seekers by boat but these people, most fleeing war zones or worse, are subject to denigration and vicious racially motivated political attacks.

The Australian Labour Party is no improvement. Former Prime Minister Julia Gillard was better known for her unwavering support for Israeli apartheid than concern for Palestinians or non-white refugees arriving by boat. She continued policies to process asylum seekers in offshore territories.

Now current PM Kevin Rudd has gone a step further saying on Friday that he would “combat the scourge of people smuggling” with a policy that “as of today asylum seekers who come here by boat without a visa will never be settled in Australia.” He has made an arrangement with Papua New Guinea to take all Australia asylum seekers, process them there and if accepted as refugees to be settled in PNG.

In the battle to be the most racist Australian Prime Minister ever Rudd has hit the lead and will be a hard act to pass. It deserves to be his political obituary.

Both Labour and National government’s here have operated racist policies which allow Australians to enter New Zealand freely to work but which tightly control Samoans and Tongans wanting to work here.
For now the vile stench of racism drifting across the Tasman will cause some nostrils to sniff a political opportunity at the expense of defenceless refugees.

Too cynical? Just wait and see.