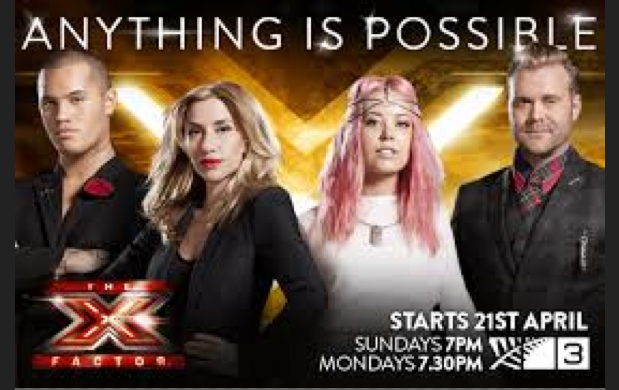 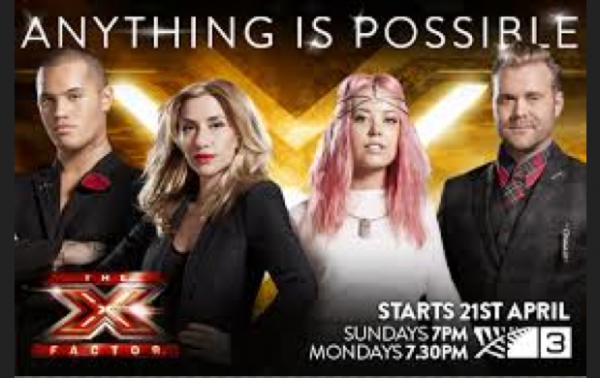 The X Factor is basically over now it’s down to four. The Maoris won in the end from what I can work out – all four spots. NZ on Air will at least be pleased to have an indigenous element arise through the extended talent show process they have funded, but probably not so thrilled they are about ninth billing to a parade of corporates in the sponsorship stakes. What was the criteria for X hundred thousand dollars again? Ultimately it’s just a NZ taxpayer subsidy for Simon Cowell’s royalties on his patent for overproduced commercial pop music. But if the NZ government can pay out for the America’s Cup yachting then part-funding a talent quest ruled by the texting mob and massively self-interested judges doesn’t seem as bad as thinking most of Team NZ’s funds are being spent on lawyers.

However, the X Factor is all about the sound and the deal not the voice and the music. It’s about the spectacle itself and how to leverage the maximum out of the material available. Rather infuriating than ingenious in practice.

The car ads feature the contestants – most eliminated now. All the ones who didn’t quite have the right factor, the z factors and the y factors. We remember their triumphs, we mourn for their careers. No trappings of success assured to them. No Lynx deoderant endorsements for feral rocker,Tom. No spontaneous manager’s discounts on his checked shirts at the Hokitika Farmers. Not for coming sixth, or whatever. And Cassie, the fresh-faced youngster on the exciting threshold of corporate slavery under the pimpage of recording industry weasels, she came fifth and thus will never be the face of an acne rinse, and she can kiss goodbye to the tampon gig. How bad is it to have missed these sorts of opportunities?

The Coke ads merge into the show with their sponsored slot. There’s a KFC X Factor special deal. Twitter is ablaze. Dan News tweets: ‘If you liked Boxes by @bennytipene on @xfactornz tonight make sure you
download it…’ Everyone has an opinion and they all seem to be doing so online. It is pervasive coverage, now reaching saturation. The lines between ads and content have blurred as the two mingle on
multiple platforms, but this is unsatisfactory, like multiple distractions that add nothing and detract a great deal. It’s an attempt to turn a simple contest into a more complex game and we will probably all be quite over the staged hype when it finally climaxes and a star is annointed and the machine goes into the next phase of production.

As for the question of talent, the process up to now has been fairly rigorous in yielding results. Despite the suspicion that the girls are voting for guys and not girls (disadvantaging them in the popular vote) and despite the chronically conflicted judges plainly backing their own ‘mentored’ acts, the quality of the performers has been high all the way through the later stages even if the song choices and arrangements have not always played to their strengths – once again no doubt decisions made with an eye to the commercial and not an ear for their artist.

The surviving contestants – apart from the Morehouse gang – have earned their places and are delivering some first rate performances. So, as long as the kids from Chch in their armless muscle shirts – who
individually can’t seem to hit any of the big notes and are the cheesiest and most one dimensional – don’t win then the X Factor won’t have been a total loss. As brutal and curt as that tosser Beddingfield can be, when he started hoeing into the boys when the cheering was still going after they had just finished a limp version of a yobbo anthem it was because it was necessary. They looked shocked. Out-charisma’ed by the stage I think is how he put it. The others weren’t complimentary either except the group’s mentor, Mel Blatt, who sported a Moorehouse branded hoodie and declared that she was in ‘Team Moorehouse’ and that everyone should vote for them. She repeated this a lot. Actually she didn’t have any analysis or commentary you would expect from a judge at all. She understands it’s all about txting in for this round.

This is the real problem – although no doubt rationalised by Cowell as a dramatic tension for entertainment purposes – the interests of the promoter/ mentor cannot be adequately reconciled with that of judge. Especially not now it’s down to four and each one backing their own horse – usually by way of trying to upend the others. This is the reason for the odd reactions totally in opposition to the live
audience during Sunday’s show.

The 18 year old without personality and swagger according to Mel Blatt, transformed in a Janis Joplin number that brought the house down in what Stan Walker said, quite rightly, was his best performance. A fat, lisping, shy man-child had become a rock god. Whenua Patuwai owned it, mortgaged it and built a house on it. But Blatt had already earmarked him gone in several carefully chosen remarks through the show and she had to dial back the raw expression of admiration and delight she had wrapt across her face during the
performance as he ticked off each one of her previously defined deficiency boxes, in order to keep to her script, eventually offering up a deflating ‘nice energy’. This is after the longest applause yet was still dying away. Like it was sarcasm. Beddingfield, slightly more patronising squeezed out ‘it was OK’. I’ve never heard such booing and shouting before, the fix was in and the punters were not having it. Was it even a tinge of spite from the judges because they were having their role ursurped by the teen masses on their mobiles?

The most unsuitable candidate, the one whose behaviour strongly suggests he doesn’t covet or care for all the commercial trappings and is not quite taking it as seriously as everyone else, the singer-songwriter and guitarist, Benny Tipene – perversely – seemed to be the judge’s consensus pick of the round. He starts mumbling along with flat strumming like Bob Dylan and then he goes loud and just when you think it’s all a bit amateur hour you realise it’s a tender and vulnerable sensitivity and the projection balances intimacy with presence… and then you really are confused: this is not what the show was supposed to be about.

I’m not sure this dangerous dalliance with free-thinking in the system will be tolerated for much longer because how much money can someone else make off a stove-pipe black jeans-wearing beatnick with big hair and a repertoire like he was Dylan’s long lost Antipodean twin brother? There was a moment early in the rounds during an elimination sing-off where the host brings them together and then draws out the decision. One girl turned to her fellow act: ‘this is animalistic, eh’ she was overheard saying. Yeah, it is a bit. That’s why it will take a minor miracle for the more eclectic type, like Tipene, to displace the more obvious Hayley Westenra track of Jacqui Thomas, for example.