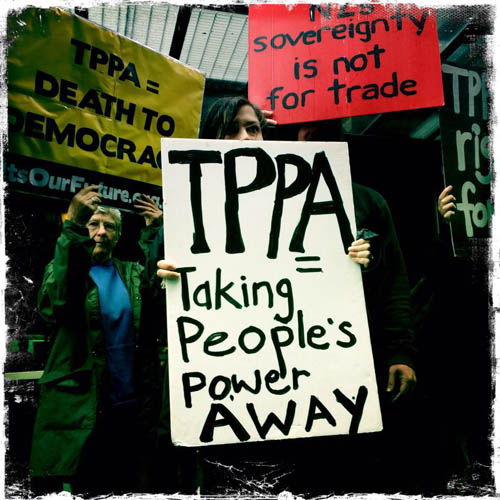 Privatisation of state power reached its zenith last week. No, it was nothing to do with Sky City, Christchurch building permits, or GCSB (that I know of).

The negotiation and signing of a binding and enforceable international treaty is the ultimate exercise of the executive’s prerogative power. Yet the lead role in negotiating the new free trade and investment agreement between New Zealand and Taiwan was apparently outsourced to Charles Finny, a consultant at Saunders Unsworth.

Finny is the former head of the Wellington Regional Chamber of Commerce and an erstwhile Ministry of Foreign Affairs and Trade (MFAT) diplomat, including a stint as the New Zealand Head of Mission in Taipei from 2001 to 2004. He joined Saunders Unsworth in 2010 and is one of the chosen few with their own swipe card to enter Parliament. Finny has confirmed to me that he was ‘engaged by MFAT as a consultant to assist with this negotiation’ and ‘I am obliged to bill all my time through the company’.

Yes, a senior consultant from the same lobbying and PR company that has been advising Ministers of the Crown, Treasury and executives of state-owned enterprise Solid Energy on how to evade ‘problematic’ Parliamentary and media scrutiny has been leading the negotiations on an international treaty on behalf of the New Zealand government.

This is not an attack on Finny, who is clever, personable, and for some years has appeared to be Trade Minister Tim Groser’s alter ego. Fran O’Sullivan described the Taiwan deal in the NZ Herald as the latest feather in Finny’s cap. Finny has been very close to power in various negotiations. In 2010 he gave a speech to an influential Taiwan think tank on New Zealand’s strategy on free trade agreements (FTAs) and lessons for Taiwan. In it he reported giving the same talk to Taiwan’s Minister of Economic Affairs, and that he had just come from attending the signing of the New Zealand Hong Kong FTA – it is not clear whether that was on behalf of the Wellington Regional Chamber of Commerce, Saunders Unsworth or whom.
The privatisation of treaty making doesn’t stop with Finny. This is New Zealand’s first free trade agreement in more than three years. The last was the FTA with Hong Kong in 2010. Trade minister Tim Groser would normally be shouting the news from the top of the beehive. Instead, the agreement was signed discreetly at Victoria University of Wellington last Tuesday. Senior officials from the New Zealand government were apparently not there, let alone any Ministers. The treaty was signed by Stephen Payton, the Director of the Commerce and Industry Office in Taipei on New Zealand’s behalf. That office is a subsidiary of the Wellington Employers’ Chamber of Commerce.

Yes, a subsidiary of the Wellington Employers’ Chamber of Commerce signed an international agreement that binds the current and future New Zealand governments to a wide-ranging raft of obligations that can be enforced not only through de facto state-to-state dispute settlement, but also through the discredited investor-state dispute settlements that have become so controversial with the TPPA.

The whole arrangement is a diplomatic charade. The agreement is officially between New Zealand and the Customs Territory of Taipei, Penghu, Kinmen, and Matsu on Economic Co-operation or ANZTEC. The New Zealand Commerce and Industry Office conducts formal diplomatic relations in Taipei on behalf of the New Zealand government, which does not formally recognise Taiwan. According to its website (www.nzcio.com) ‘New Zealand’s one China policy allows it to develop fully its trade, economic and cultural interests with Taiwan. The pursuit and development of these interests is the responsibility of the NZCIO. The office is New Zealand’s interface with the Government and people of Taiwan.’

The staff are either directly employed by the Office or seconded from government agencies. Payton, who signed the text, had been seconded to the role in 2011 from his position as head of the APEC unit at MFAT. The Taiwanese were not concerned about such details; in Taipei, Payton was billed as ‘New Zealand’s top trade official’.

I have no doubt that Finny has the skills to do the job of negotiating such an agreement, especially with Taiwan. I accept that the situation with Taiwan is unusual and arguably unique, and that the process and agreement would have had the implicit approval of the People’s Republic of China. The Office run by the Wellington Chamber also seems to be an effective vehicle for maintaining commercial and cultural relations between two countries.

While I don’t accept the benefits claimed for the agreement and absence of any reference to potential costs – we have the standard hype for such deals, albeit more subdued than normal – I don’t aim to debunk that here.

There are more important, indeed fundamental, constitutional issues that arise when the government outsources the negotiation of any international treaty. Those concerns intensify when that agreement carries significant liabilities and constraints on the autonomy of future elected governments. The constitutional alarm bells should be ringing at full volume when that contract goes to a consultant within a highly influential political lobbying company.

First, it will be claimed that this was a one-off, necessitated by the fact that New Zealand does not have diplomatic relations with Taiwan. Maybe that is true. But a dangerous precedent has been set. And how would we know if it were happening again, or even happening now, until a deal was done? The MFAT website did not even disclose that this agreement was being negotiated.

Second, what privileged access to information and influence does this arrangement give to the Wellington Employers’ Chamber of Commerce and to Saunders Unsworth? The private players involved certainly had more information than Members of Parliament, let alone the general public, about the deal. As with other bilateral free trade agreements, notably the Trans-Pacific Partnership Agreement (TPPA), the text remained secret throughout, and there was even less publicly accessible information about this deal.

Presumably, commercially sensitive or beneficial information would be protected by some kind of firewall. Even if that worked effectively, there is an obvious potential for the commercial priorities of the private players conducting these highly secretive negotiations, and the constituencies to which they listen, to take precedence over public and private interests that might be prejudiced by the agreement.

How do we know?

Third, it is not clear who is constitutionally accountable for such negotiations, and how. The negotiating process and the signing itself seem designed to keep the Minister, the Cabinet and MFAT at arms length. Presumably Finny and Saunders Unsworth were operating under a direct contract to MFAT, or indirectly through the Commerce and Industry Office in Taipei. But what was the flow of instructions and what autonomy did the private negotiator have? How did Cabinet maintain its diplomatic distance whilst protecting ‘the national interest’? Presumably Cabinet signed off the final deal, but without signing the document itself. Are they collectively accountable? I doubt that we can find the answers to these questions, because the Official Information Act provides special exclusions for international treaty negotiations.

Finally, what is the official status of this international (non-)treaty? To repeat: this is a treaty that binds New Zealand governments, not only in a de facto state-to-state enforcement, but also through the illegitimate investor-state dispute settlements that have become so controversial with the TPPA. But the final version is not on the MFAT website and it may never be. To find the text, you need to go to the website of the New Zealand Commerce and Industry Office in Taipei, a subsidiary of the Wellington Employers’ Chamber of Commerce.

This is all very disquieting and requires much more attention than it has gained to date. The intimate nexus of state and commercial power is growing so close that the two are becoming indistinguishable. One of the country’s most influential lobbying and PR firms is increasingly becoming a proxy part of the Key-led National government. How many similar examples are there that we don’t yet know about and what does that mean for the illusion that we are governed through a parliamentary democracy?