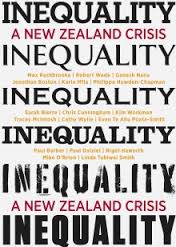 What might shape the political issues for 2014? That question was answered last week with the release of a brand new book written by some of NZ leading academics looking at the vast increase in NZs inequality.

Last week in a packed lecture theatre at Auckland University, BWB Books released ‘Inequality: A New Zealand Crisis’. Edited by Max Rashbrooke, it carries the opinion of some of NZs best academics, economists and social commentators all focused on highlighting the gross mutations of wealth concentrations to our once precious concept of egalitarianism.

The hegemonic nature of what confronts us as we begin discussing inequality was investigated on the night by the main guest speaker, the incredible Robert Wade. Professor of Political Economy at the London School of Economics.

He pointed out that in a mere 10 years, the financial economy in 1997 went from being 15 times greater than the real economy to 70 times greater than the real economy by 2007. With the rise of financial markets there has been a weakening of substantive democracy and a weakening of national sovereignty. With political parties dependent on the richest 1% for donations, modern democracies have drifted towards substantive oligarchies. Wade argues that we now face the reality of plutocracy, where the concentration of wealth allows for an oligarchic political elite to dictate policy for the 1%, by the 1% in the interests of the 1%.

The book itself is a devastatingly well researched argument attacking any pretense we may have that Jack is as good as his master in these shaky Isles.

Here are some of its conclusions:

-Maori had 95% of their land appropriated and alienated between 19th Century and 20th Century. (Compensation for the almost complete loss of an economic base in just over a century? A mere $1.4Billion in Treaty settlements. A steal at twice the price you might say. Not only have Maori been ripped off, but they are also forced to live in poverty with the reality of generations worth of being ripped off. Insult to injury, jowl by blistered jowl.)

-While we all have a responsibility to contribute, we also have the right to benefit from the fruits of society. The road worker, receptionist and sales assistant all contribute to a functioning economy as much as the businessman and executive do.

Peter Dunne’s lack of party members is a symbolic gesture that there won’t be any political middle ground next year. The election will be decided by the fringes of the political spectrum, either by ACT/Conservative Party teaming up to give National the Parliamentary majority or by MANA enabling Greens & Labour to have the numbers.

The inequality that National has exacerbated has created two NZs. Those who have benefitted from the $400m per year tax cuts and those who have not. National are championing policy for the wealthy at the direct cost of the poor and if that injustice isn’t enough to motivate engagement, then nothing will.

Inequality will be one of the issues that shapes the 2014 election.