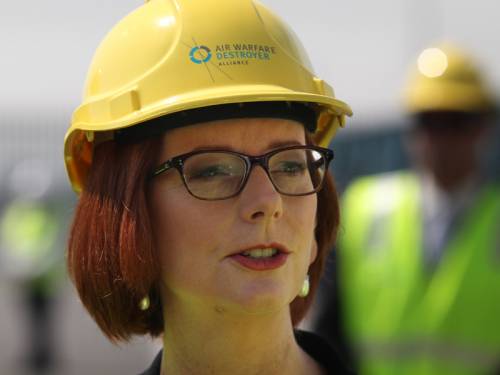 Despite the title of this post, I am not writing about the America’s Cup.

I am writing about the goings on across the ditch with K Rudd’s return to the position of Prime Minister.  For those of us who follow Australian politics, his return and manner of such a return was not a surprise – it was entirely in keeping with his often divisive and ego driven political history.  (On Julia Gillard and the incredible challenges she unfairly faced, I recommend reading this excellent piece in the New York Times.)

Following an earlier failed attempt to unseat Gillard, Rudd was all across the Australian media saying that was it – no more leadership challenges!  He could not have been clearer in his denials.

But, of course, this is politics!  It is a different game and times change, and after Rudd saw the new Superman “Man of Steel” trailer, he put on that cape to race in to save the Australian Labor Party!!  “Truth, justice and the fair dinkum Aussie Way!!”

And, you know what?  He might just do it.

Well, save the ALP.  I’m not sure about the fair dinkum Aussie way…

In what pundits are calling the “Rudd Honeymoon”, Labor has made considerable ground in the polls.  In the latest Newspoll results (9 July 2013, available at The Australian) and taking into account the preference vote (ie, the two party vote), Labor is now 50-50 with the Liberal/Nationals Coalition.  This is a massive turn-around from only a few weeks ago.  Further, Rudd is significantly ahead on the preferred Prime Minister stakes.

Of course, there are a number of factors behind this.  The “honeymoon” glow itself, with voters excited about a change (albeit a return) in leadership personality; voters faced with the reality of a government including Tony Abbott, Joe Hockey and Co; and the relative on-going economic prosperity in Australia along with several other relevant matters.

But, sadly, we have also seen K Rudd turn to a familiar target, and one that bizarrely seems to have a disproportionate effect in Australian federal elections: refugees.

This past week the Australian Government has announced a raft of tougher steps in its asylum processing, while thousands languish in immigration detention both in Australia and in territories where Australia has out-sourced its human rights obligations.

One of the mouthpieces in this recent attack has been Foreign Minister Bob Carr.  Senator Carr has been repeating the same mantras we have heard in previous election cycles – this is about people smuggling, the refugees are “queue jumpers” and that most of the refugees are coming to Australia for economic advantage.  Most recently, Carr has said that his officials are reporting to him recent arrivals from Iran claiming asylum but really seeking work opportunities in Australia.

The mantra, though, has no factual basis.  As I wrote in an earlier post, over 90% of arrivals by boat have been determined to be genuine refugees meeting a strict and difficult test under Australia’s Migration Act and the Refugee Convention showing a fear of being persecuted (that is, serious harm plus a failure of state protection).

Other refugee advocates have been more pointed in rejecting Carr’s language.  In particular, Julian Burnside QC – one of Australia’s leading human rights lawyers – called Carr a “bigot” and said that he was “talking through his hat” with a complete absence of facts to support his claims.

The intention, though, is clear.

In targeting refugees as the “other”, by using language that paints all refugees (despite the diversity within this group) with the same brush as being devious and subversive, Carr and Rudd are setting a platform for yet more punitive rhetoric against these individuals fleeing persecution.  The shabby and undisciplined result is criminalising this group of survivors and punishing them for actually taking the steps to leave a situation of human rights abuse.

For instance, the Home Affairs Minister Jason Clare recently called for refugee camps to be set up in Thailand, Malaysia and Indonesia (see The Age).  Yep.  Refugee camps.  Brilliant, forward, out-of-the-box thinking there…

Refugee camps, which are really a form of human warehousing, only breach human rights.  They do nothing to actually promote human dignity nor provide any substantive form of protection.  This is a discredited policy response and shows the lack of focused thinking on the issue.

As I have argued elsewhere, a constructive regional approach is needed where cooperation, and not punishment, is the mantra.  For me, as someone who has worked in the region, a key factor in onward movement to Australia is the lack of rights for refugees in Thailand, Malaysia and Indonesia.  In each of these countries, refugees are illegal and liable to arrest, detention and deportation.  The starting point needs to be legal stay in these countries with temporary, renewable visas while asylum claims are processed.

But, such an approach takes a lot of work.  While I know that states are working together behind the scenes (see, for example, the Regional Support Office, although I am yet to see anything tangible from that endeavour), in public it is much easier to target and vilify the refugees.

What really upsets me, though, is how politicians are rewarded for it.  Yet again we are seeing in Australia a federal election where asylum seekers are a key issue and the goal is not to suggest real solutions in a rights regarding way, but it is to directly punish a group of human rights victims for a political benefit.

Maybe, Julian Burnside QC’s choice of language is right: underlying all of this is bigotry.  It is hard to avoid that conclusion when we see such language from both the Australian Government and the Opposition.

So, be ready as the rhetoric is ramped up as the election gets closer.  Will Kevin Rudd and Tony Abbott protect the fair dinkum Aussie way for everyone…or will they race each other to the bottom in denigrating refugees and asylum seekers?

I know where my money is.