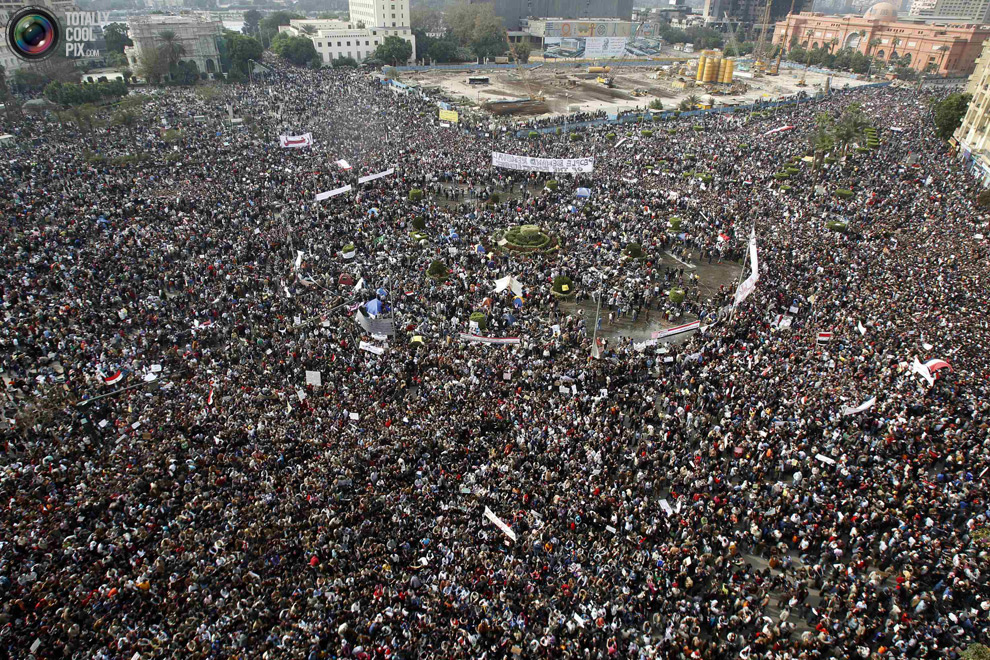 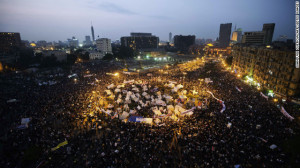 They say there is a kernel of truth in every rumour, and the events in Egypt over the last few weeks have proved this. First a mass petition, then a mass protest, then a military coup, then a media shutdown and then a massacre. As the old dictum goes, the first casualty in war is the truth. Or as John Pilger suggests, the first casualty is journalism. The events in Egypt have seen dedicated people on all sides attempting to circulate information, but it is clear that this information is becoming too polarized and the discourses too sedimented. If Egypt is to avoid further violence then this is the first thing that must change.

For the pro-Morsi protestors, the events constitute a military takeover of a legitimate government, as Morsi emphasized 57 times in his 45 minute final speech before being snatched by the military to an undisclosed location. Part of Morsi’s problems are those of many democracies in the west – he won with a majority, winning 51.7% of the vote, but only  million more votes than the candidate Ahmed Shafiq, who represented Mubarak’s regime. While the ability to pass policies and appeal to the people is a problem of all democracies, in Morsi’s case this problem was exacerbated by the post-Revolution Egypt he inherited, which had a flailing economy and polarized factions which, having come together under the broad banner of the Revolution were then having trouble cooperating. Overthrown as Egypt’s first democratically elected President by protestors (who were backed by the opposition and Salafist party Al-Nour) and the military, the military have moved swiftly in a crackdown on the Brotherhood in a move that they maintain is necessary to quell the violence. After Morsi defiantly pledged to shed his blood rather than step down, the military arrested Morsi and more than 300 Muslim Brotherhood members. This was accompanied by a media shutdown, where the eight Islamist channels were shut down as well as Al Jazeera. In despair at losing their elected President, Muslim Brotherhood supporters have hit the streets. In a sit-in at the Rabaa Ardiwiya mosque, 51 Brotherhood supporters lost their lives when the military fired on them in the worst incidence of human rights abuses since the Maspero massacre.

For the anti-Morsi protestors, the international media’s response has been to gloss over the conditions that led to this. Certainly, since the military coup the Muslim Brotherhood have hardly been the most reliable source, often shooting themselves in the foot. From releasing images on their official account of dead Syrian babies as being present at the sit-in in Rabaa (in fact no children were there), to images of protests from November as occurring today, the Ikhwan are proving themselves unaware of the powers of reverse image search. Having accused the other side of inflating numbers, the Muslim Brotherhood are now basing their numbers for protests on the calculation of an implausible 18-25 people per square meter.  While the Muslim Brotherhood certainly have a strong moral argument as to why they should have been allowed to lead, there is little doubt that they have consistently been their own worst enemy in terms of checking and verifying facts. Anti-Morsi protestors argue that the accounts that position the Brotherhood as democratic place a veneer over the way that Morsi failed to reform the police state. They point, for example, to Morsi’s treatment of protestors that reached the Presidential Palace in December, leading to nine deaths and a number of claims of torture by Brotherhood members, an event that was tracked by human rights groups. They also point to Morsi’s extension of his powers under the Constitution, Morsi’s attempt to prosecute journalists, attacks on journalists (ironically one of these in the build up to June 30th was at a Brotherhood non-violence rally) and the persecution of foreign NGOs under the Brotherhood. Basil el-Dabh argues that some of the channels that were shut had a track record of claiming that the Copts were mobilizing militia. There is little doubt that there has been shrill media around the Brotherhood, with independent media characterizing them as ‘terrorists’, but they can hardly claim that they are above such deeds.

The distorting lens of this kind of speculation which generalizes both sides is ultimately going to be violence. All groups must carefully fact check information. This kind of echo chamber of rationalizations is incredibly evident when one looks at the role of the US. Much speculation in all of this has revolved around the US position, given its history of interfering in nation states and destabilization in Iran and Latin America. One thing is for certain, the anti-US sentiment is high in Egypt at present.

For many of the pro-Morsi protestors, the US has backed the military, which it funds to the tune of $1.5 billion a year in aid to carry out the Camp David Accords in 1979 which allow for peaceful relations with Israel. Egypt shares a border with the Gaza Strip, so the provision of military aid provides the US with a strategic military bolster with Israel, the latter of which is deeply unpopular with Egyptians due to border wars and Israel’s oppression of the Palestinians. The army is estimated to control 30 – 40% of the economy in Egypt, making it deeply embedded within the economy. This, together with the elites who were part of Mubarak’s rule (the felool) is referred to as Egypt’s ‘deep state’. The Muslim Brotherhood argue that Morsi has inherited a difficult economic climate and one where he has been politically isolated, limiting his efficacy. They point to the way that following Morsi’s election he was unable to take control of the judiciary, the police or the army and he faced a hostile opposition that refused to cooperate.  There is certainly some evidence to suggest that this is the case. Many have pointed to the way that wheat exports seems to have been withheld by the US, based off an article by Tariq Ramadan. Egypt is reliant on imports for 40% of its wheat. Yet, once we examine this claim we see that there are other factors that have contributed to the crisis. A drought in Russia (from which Egypt gains half of its wheat) led to a ban on exports there, and extreme weather patterns also led to rising cost of US wheat exports because the supply was affected. So it is difficult to tell without further analysis of the wheat situation.

This claim was reiterated together with the one that the US has helped starve the fuel from the population to grant the grounds for the crisis in an influential article for The New York Times. As Rawah Badrawi notes, the problem with The New York Times article is that it predictably positions the ‘true’ forces undermining Egypt as a woman and a Copt, amplifying traditional sources of antagonism. If you are not familiar with the religious divides and tensions that undercut Egypt, the Copts are approximately 10% of the population who sometimes are attacked by zealots. Following the coup, the official Ikhwan press account released that Supreme Constitutional Judge Adly Mansour who was appointed Interim President was Jew who approached the Copts to be baptized, but even the Copts turned him down. When the latter attracted ire from Egyptians, the Ikhwan site took it down, which they were also criticized for, so they then put up a screen shot stating that they had released this and took it down. When I was there in April, one was killed and 39 injured in clashes during a mass funeral in Abbasiya. Following Ikhwan’s statement, a Coptic Priest in Sinai was shot dead.  This is significant because an increase in sectarianism is one of the key criticisms of the anti-Morsi protestors. Morsi encountered criticism earlier in the year for remaining quiet at a rally while Sunni clerics urged Sunni Muslims to fight against Assad’s Shiia Alawite sect in Syria, an event that many saw as linked to the unusual sectarian violence that saw four Shia and Tamarod supporters lynched in June.

The question remains of what the US are doing. To me it remains completely unclear. For the anti-Morsi crowd, Obama backs the Muslim Brotherhood. On the page ‘Obama sponsors terrorism’, Obama has been photoshopped into Morsi and Osama Bin Laden. Why then, when the other side has a compelling narrative, would they equate Obama with the Muslim Brotherhood? Well, US Ambassador Anne Patterson repeatedly made statements urging against military intervention and Obama has recently come out in a statement urging the Army to release the Muslim Brotherhood and Morsi. An interview with military advisors early on stated that they felt the US was unhappy with them for the coup. The issue of coup or no coup was so sensitive that CNN had to remove their cameras from Tahrir Square due to protestor anger at them calling it a coup. Ex-pat Egyptians marched on the CNN building in New York a few days ago. Ironically, Obama is also under attack domestically from Conservatives who argue that his policy has been to support moderate Islam, a policy they argue was doomed to failure due to the instability of the nation states in transition. While some have argued that the support of the coup from some Israeli commentators evidences US support, it is not clear to me that this is the case. The support for Assad in some military circles was based on the notion of stability, rather than overthrow to liberal democracy. Considering the penchant of the Israelis to jump to a defensive worst-case scenario first, one might think that the parallels that people have made to Pakistan and Algeria might have already been modeled. In my own personal opinion, I think the US was certainly working to slightly undermine Morsi, but did not want an all out coup as it brings another unstable player into a region that it appears in spite of their efforts they are not able to control.

None of the above justifies a military coup. While Morsi definitely had opportunities to reach across and the Opposition definitely made this difficult (this is what an Opposition does), there is absolutely nothing that justifies this kind of extrajudicial detention. It may have the effect of mobilizing groups towards violence rather than pursuing democratic solutions. The Army may be the group with the greatest organizational and military power, but it still is not well perceived by protestors on both sides and they are the people who are capable of getting masses of people out on the streets. But events in Egypt also highlight how we all have a responsibility to learn, to attempt to gather information, and to not base our entire perception on a ready made narrative.