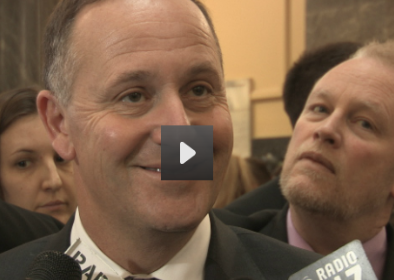 What was that about “moral mandate”, Dear Leader?

Key said the largest party had the “moral mandate” to govern.

“If National was to go out there and poll 46 per cent or 47 per cent – very similar to the result in 2011 – and not form the Government I think there would be outrage in NZ.”

So Key now believes in large numbers and percentages?

Because he certainly paid no heed to the Will of the Electorate when the majority (up to 75% in some polls)  opposed partial privatisation of   State assets.

Nor did Key pay any attention to  the finer points of the results of the  2011 election.  The majority of Party Votes  went to  parties opposing  asset sales,

So even though the Conservative gained no seats in Parliament (*because of the 5% threshold),  they gained over double the electoral-support for ACT. The Conservative Party, it should be noted, opposed asset sales.

It certainly did not matter to Dear Leader on the issue of public opposition to asset sales. He was more than willing to ignore the majority of New Zealanders who opposed his privatisation agenda.

On  Key’s claim that “morally” he should lead the next government post-2014 because National may be the largest Party  in Parliament – he should remember one thing;  size doesn’t always count.

Key’s assertion  on having a so-called “moral mandate” to govern post-2014, is  obviously a  message directed at  Winston Peters.

His message to Peters  is simple – ‘if we’re the biggest party, then we are the rightful government. And we will push this meme in the public consciousness which will make life difficult for you if you don’t co-operate’.

This is the kind of deviousness which National’s party strategist (taxpayer funded, no doubt) has come up with, to ensure a third term for John Key.

It now falls upon Peters to see if he’ll cave to pressure from the Nats.

The Pundit:   On coming first, yet losing

One of the topics of discussion was fluoridation of  urban water supplies. As is usual on issues like this, the debate became passionate.

But curiously, it was the position taken by each guest, Brian Edwards and Michelle Boag, that I found curious.

Usually, a left-winger will argue from a position of Collective action and responsibility. Like the issue of Food in Schools, the Lefts supports the stance that raising children, and ensuring their well-being, is a community responsibility.

The Right usually argues from a position of Individual choice  and responsibility. On the issue of Food in Schools, the Right reject any notion of collective responsibility and instead hold to  total parental responsibility as a default position.

I expected the same in the fluoridation debate between Brian and Michelle – only to find their positions reversed.

Brian was advocating from a Libertarian position of individual choice. He opposed flouridation.

Michelle was supporting the Collectivist position for a socialised benefit. She supported flouridation.

Their debate can be heard here:

Such complex creatures we humans are…

Eqypt is not the only country wracked with coup d’états.

On  30th March 2010, National seized control of Environment Canterbury, postponing elections, and three weeks later appointing seven, un-elected Commissioners to run the body. The new Commissioners  were vested with new powers to  implement regional plans for Canterbury that could not appealed to the Environment Court (except to the High Court on points of law).

Roger Young, a trustee of the Water Rights Trust,  suggested one of the prime movers for central government seizing control of ECAN was the vexed problem of water rights in the Canterbury region,

“After the commissioners’ own recommendations for a mixed member governance model at ECan post-2013 were ignored by the government, we see ECan now as simply a puppet to the bidding of a government which appears determined to increase irrigation and intensive farming in Canterbury despite the first order priorities in the Canterbury Water Management Strategy.

The slow pace of change behind the farm gate means that we will still have rising stocks of dirty water at a level that will haunt Cantabrians for decades.”

The Canterbury Central Plains Water project is a half-billion dollar project, and National Ministers wanted to ensure that the money was spent according to their agenda. As we all know, farmers tend to vote National.

Three years later, and National has extended it’s power in the Canterbury region  “to oversee the Council’s consents department”. We are told that this was by invitation by the CCC.  I am reminded of puppet regimes that, once installed by a Super Power (former-USSR, US, China, etc) , duly “invited” their sponsor to send troops to help prop up the proxy government.

Was the Christchurch City Council “persuaded” by Gerry Brownlee to  “invite the Minister for Local Government, Chris Tremain, to put in place a Crown Manager to oversee the Council’s consents department“? Were there back-room dealings where Mayor Bob Parker was issued an ultimatum by Brownlee;

‘Invite us to take over; save face; and save your arse at the up-coming local body elections – or we’ll take over anyway; you have egg on your face; and Lianne Dalziel takes over as Mayor in October – Your call.’

Is that the discrete conversation that took place between Bob Parker and Gerry Brownlee?

Len Brown was, understandably, ecstatic. Christmas has come early for the Auckland Mayor,

“I am delighted the government has agreed to support this project…

… I want to acknowledge Aucklanders for being very clear in their support for this project.”

However, the Nats are not ones to offer something without expecting something else in return,

So central government will pay up a few billion bucks to upgrade Auckland’s transport system – but the Nats expect Auckland City to privatise their community owned assets?

When it comes to Nanny State, National out-performs the previous Labour government in spades. Labour hardly ever engaged to this degree of interference in local government affairs.  Executive power under National is growing, and impacting more on our lives.

With National intending to increase the powers of the GCSB and force telecommunications companies to store and hand over data to police and the spy agencies, the state’s influence in our lives grows day by day.

By comparison, Labour was practically a hands-off, “libertarian” style government.