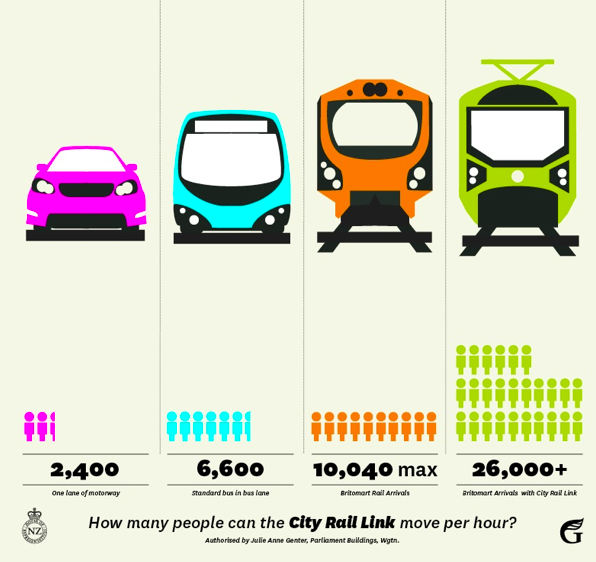 Last week news broke that the Government had come to the party on the Auckland city rail link (CRL). Sort of.

At an expensive luncheon put on by the Chamber of Commerce (held at Sky City, of course) the PM announced that central government would be getting behind most of the transport projects in the Auckland Plan. The vast majority are expensive, and unhelpful, highway projects.

How any of these projects will be funded has still not been explained, and rail still isn’t the priority. Key and Brownlee are talking about a 2020 start date. Never mind that buses will be over capacity by 2021 without the CRL. National hope to take credit for a popular project, without actually committing any funding to make it happen.

This is clearly a vote-winning exercise, done to placate the big Auckland business interests who will benefit from the project. Unfortunately, they still haven’t grasped the critical paradigm shift – spending billions on new highway capacity isn’t going to help congestion or reduce transport costs. It will make things worse.

Today at an Auckland Mayoral Conversation event, Edward Glaeser, a Harvard economist (not known for being left wing or an environmental extremist) made exactly this point. The fundamental law of road congestion is that if you build more highway lanes, people drive more. This incurs all sorts of additional costs, including but not limited to: congestion, forced vehicle ownership, need for parking, high fuel use, associated environmental costs and crashes.

We already have an extensive road network. Early on Sunday morning you can drive wherever you need to without a problem. The issue isn’t a lack of roads – it is too many people trying to use them at the same time. Investing in alternatives not only benefits the people who use them, it takes the pressure off our existing roads.

The absolute priority for investment should be walking, cycling and public transport. We don’t have any need for additional highway capacity or wider road lanes – if any thing many of our roads could do with a diet.

What about trucks? Don’t we need more highway links for trucks? Freight only makes up about 7% of vehicles at any given time, and 1% at peak. We have plenty of roads for freight and other commercial vehicles, the issue is commuters.

Aucklanders aren’t wedded to their cars – it’s an abusive relationship they have been consigned to by successive decades of car-centric transport policy. Give them a decent public transport option, or better yet, safe walking and cycling, and many will take it. Even if it is only 20%, that is more than enough to ease peak congestion, and it will cost everyone much less than the status quo of increasing car dependence.

John Key and the National Government still do not seem any closer to providing real transport choice, even if they have realised that rail might be popular in Auckland. Their concession is a win for rational transport in the public discourse, but to get the urgent rail investment we need, New Zealanders will almost certainly need to vote in a new government next year.