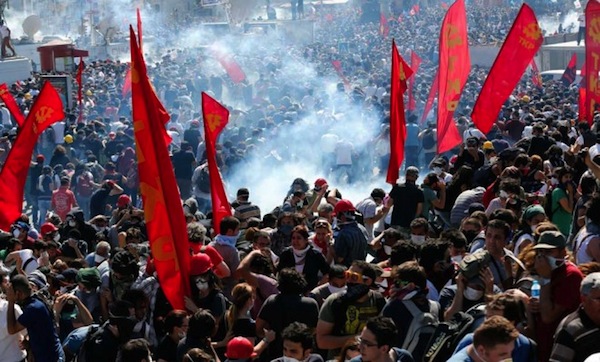 In a risky attempt to inarticulately impersonate Tom Friedman, I write this from Istanbul, the scene of recent clashes between protestors and police.

While not an Arab Spring moment, these demonstrations include similar statements from the disenfranchised and marginalised speaking out against the use of State power absent effective accountability mechanisms. I feel it is part of a larger theme we are seeing across the world and something that we too in New Zealand need to embrace, in our own way and relevant to our own context.

To backtrack, the protests began on 28 May around a government decision to develop Gezi Park in Taksim Square, but soon mushroomed into something much more across the entire country with additional demonstrations in solidarity, harsh crackdowns by the Police, and Turks confronting the underlying issues of where their country is going and the kind of leadership they desire from their politicians.

Gezi Park is a small area part of the larger Taksim Square suburb popular with many as a green public space in a densely populated city. The government, though, has approved the development of Gezi Park to build a replica of Ottoman-era barracks along with a Mosque.

For those at the protests, therefore, their involvement most directly speaks to a fundamental issue. Although often seen as dull and entirely unsexy, that issue is actually always surrounded with controversy and intrigue. It is, of course, town planning!

Driving around here, you can see that Istanbul is full of new construction. In the rush to capitalise on the economic boom in Turkey, the government has created the literal and figurative space for a constant renewal of Istanbul. There is the building of a new bridge across the Bosphorous joining the two continents of Europe and Asia, a new airport project with the hope of making Istanbul rival Heathrow for the volume of air traffic, and the constant changes to the Istanbul landscape. (If you are interested, check out a radio recent piece on Monocle 24 about Istanbul’s growing pains.)

While there are clear improvements to infrastructure, and more is needed, what is lacking is a transparent and principled basis on which any planned development can be scrutinised. There is no tangible ability for citizens to challenge development, and extremely little regard for any historical or environmental concerns.

I understand that there is also a very strong and prevalent ethnic issue here, coupled with familiar issues around economic inequality. Many of the proposed developments will have a disproportionate impact on the poorer Kurdish communities. Without the ability to properly challenge this impact, the poor are inevitably pushed further out of the city exposed to more precarious work and lifestyle options.

The response to the development for Gezi Park, though, goes beyond town planning and represents the culmination of a frustrated citizenry denied the ability to be involved in any decision-making.

Of course, this speaks to the concern around the increasingly conservative and dictatorial nature of the Erdogan government. This is only compounded by the violent and emphatic police response to the dissent we have seen in Gezi Park and across the country, in stark contrast to the protests in Brazil and the Brazilian government’s belief in the right to express such dissent.

Prime Minister’s Erdogan’s response is that his party, the Justice and Development party (AKP), has won the last three elections in Turkey and has clear support for their economic and socially conservative policies. It was in The Economist (June 22, 2013, p 16), though, where I felt this was best rebuffed:

“In part this is a matter of rules and institutions to constrain a leader’s power and to allow the aggrieved to find redress. These should include a robust account of citizens’ basic rights, independent courts to enforce them and free media to monitor them. …

The basic idea of a democracy is that the voters should pick a government, which rules as it chooses until they see fit to chuck it out. But although voting is an important democratic right, it is not the only one. And winning an election does not entitle a leader to disregard all checks on power. The majoritarian world view espoused by Mr Erdogan and leaders of his ilk is a kind of zombie democracy. It has the outward shape of the real thing, but it lacks the heart.”

For me, this “zombie democracy” also applies in New Zealand. While some commentators refer to the National Party’s mandate having won the last two elections, I start to think of accountability and question how accountable our parliamentarians actually are?

There is a list of things that worry me. The volume of legislation passed under urgency (by the current National and previous Labour governments) denying any sort of Select Committee process (and platform for public submission), the lack of an effective fundamental human rights framework, the removal by Parliament of rights to judicially review government action when it suits them, the abrogation of the right to protest at sea…the list gets longer each week, all combined with an ineffective fourth estate.

Globally, I see what is happening in Turkey and Brazil as part of a broader theme. I see these movements in the same overall theme as the London riots in 2012, the Occupy movement, the Arab Spring, the Indignados in Spain, the “Not our debt” movement in Ireland, the North Paris riots, and so on.

These movements are the expression of the disenfranchised and economically marginalised populations of the world, marginalised by the global impact of the neo-liberal policies of the last 30 years. Policies which you would have felt were fatally undermined by the 2008 Global Financial Crisis, but to which most governments remain committed with a return to business as usual approach.

So, where is, to coin a phrase used by Roberto Unger, the left alternative? Where is a focused and coherent philosophy to connect these movements with a political response that is committed to social justice, global development and empowerment in an environmentally sustainable way?

That is what the people in Gezi Park and on the streets of Rio de Janeiro are asking. People are also asking that same question in Whangarei and Timaru. It might not be explicit, but it is there.

Who has their answer? David Shearer…?