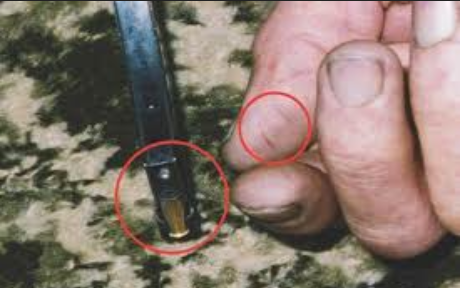 Why so many people refuse to accept David Bain’s innocence. 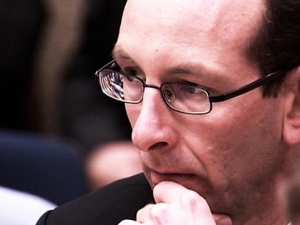 NOW, I’M NO FORENSIC SCIENTIST, but the “new” evidence of David Bain’s innocence strikes me as pretty persuasive. I’ve written “new” in inverted commas because it isn’t really new at all. The tell-tale imprint of gunshot residue on Robin Bain’s thumb was there all along in the photographic evidence, but somehow, like so many other items of evidence in the Bain trial/s, it was “overlooked” by the Police.

Had the Every Street crime scene been properly processed there’s every chance that the evidence of Robin Bain loading and reloading the magazine of the .22 rifle used to killed his family and himself would have been identified during the autopsy, and the Police investigation team’s initial impression – that the father was responsible – would have been confirmed. But, as we all know, the crime scene was a mess: procedures weren’t followed; evidence was lost; and, in the crowning folly of the Bain investigation, the whole house was allowed to be torched – destroying the crime scene forever.

But perhaps we should cut the Police a little slack. What they walked into that day was a waking nightmare of blood and horror. Few Police officers will ever encounter so much unlawful death (five bodies) in a single dwelling. It was enough to reduce the sole surviving family member, David Bain, to a gibbering wreck. The multiple errors which took place in relation to the protection of the crime scene and the gathering of evidence indicates that many of the attending Police officers weren’t in much better shape.

Even so, it is extraordinary that in the 19 years that have elapsed since that dreadful morning in June, 1994, only a Waikato businessman recognised the marks on Robin Bain’s thumb and realised that since he had evidently been touching the murder weapon’s ammunition magazine, he was more likely than anybody else to have been the perpetrator.

More extraordinary, however, has been the reaction of those who remain absolutely convinced that it was David – not Robin – who killed the Bain family. The latest revelations haven’t made even the slightest dent in their iron-clad certainty of David’s guilt. Indeed, one really struggles to think of anything, any piece of evidence, no matter how strong, that could alter their conclusion that David is the one who done it.

The questions I come back to over and over again are: “Why are these people so reluctant to believe in the possibility of David Bain’s innocence?” And, “Why is it so important to them that the original verdict should be allowed to stand?”

Part of the answer is, I believe, buried deep in the collective psyche of any community forced to confront the shock and horror of a mass killing. The same primeval urge which demands that the scene of the crime be cleansed by fire, also drives the community to find a viable culprit upon which to vent its fury.

From the most ancient regions of humanity’s psychic geography comes the jagged cry of a death for a death. Think back to Stan Graham, the multiple murderer from the West Coast. He was hunted down and shot like a wild pig. Or, David Gray, the Aramoana berserker, cornered and killed by the Anti-Terrorist Unit. To satisfy the need for communal vengeance a living body is required. With Robin dead, David was the only Bain left alive to punish.

There’s also a political aspect to the Bain Case. It’s always been there, just beneath the surface, that visceral authoritarian need to believe in an all-powerful and infallible state. It’s been driven by the sort of people whose own unbearable feelings of inadequacy and failure are quelled by forming deep emotional associations with symbols of authority, certainty and power. The very suggestion that the Police, the Prosecutor, the Judge, and the Court of Appeal were all guilty of not only getting it wrong, but also of wilfully refusing to put it right, is enough to fill them with an all-consuming rage. Campaigners like Joe Karam are perceived not a courageous seekers after justice, but as egotistical wreckers; cancer-cells in the body politic; evil-doers hell-bent on undermining people’s faith in the system.

Such people are psychically incapable of accepting the idea of official malfeasance or institutional failure – and anyone who attempts to convince them otherwise must be struck down and punished. Just think of the Deputy Police Commissioner, Mike Bush, at Inspector Bruce Hutton’s funeral. The deceased was a blameless hero. The Royal Commission of Inquiry into the Arthur Allan Thomas case had defamed an innocent man. No one planted anything but flowers in the Crewe’s garden. The defendant was guilty as charged.

Most of all, think of the Minister of Justice, Judith Collins.

Ian Binnie, an internationally distinguished Supreme Court Justice from Canada, is commissioned by her own Government to determine whether David Bain should be compensated for the 13 years he spent in prison. Binnie tells the Minister that he believes Bain is innocent and castigates the Police investigation of the crime for which he was wrongly convicted. Collins’ reaction? To launch an extraordinary and unprecedented public attack on Justice Binnie, and demand that his report be “peer reviewed”.

We shall never know what demons drove Robin Bain to slaughter his wife and children because, when he had completed the task, they took him with them. More frightening to me, however, are the demons that drive so many New Zealanders to discipline and persecute anyone who suggests that institutions, like individuals, are frail and prone to error.

That such people persist in defending the institutions of law and justice, even when the evidence of their failure is overwhelming, I find deeply disturbing. But that so many have such need of the emotional reinforcement supplied by the symbols of authority and power that they simply cannot accept that the system is capable of imprisoning an innocent man, fills me with more dread than a hundred homicidal fathers.