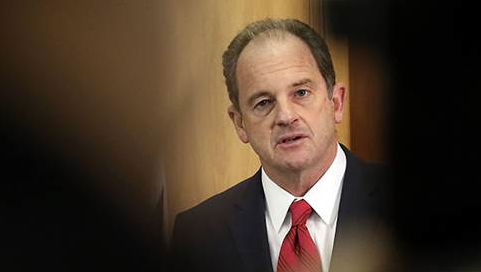 IS IT POSSIBLE to “un-surrender” yourself?

“For the past twelve months I’ve been saying: ‘Not David Shearer!’ Everything he’s said and done up to this point made me either wince with embarrassment or howl with rage. The things he should’ve (but didn’t) say and do produced similar reactions. A niggling suspicion took root in my mind that the guy was a neoliberal: that all his hesitations and misstatements were born of a determination to mask his true beliefs until it was too late; that we were heading for a replay of 1984.”

What happened on 18 April that change my mind? Well, that was the day Labour and the Greens announced their energy policy. A single buyer of electricity and gas, NZ Power, would re-regulate the New Zealand energy market – lowering the cost of power to every Kiwi household.

Labour had actually managed to surprise me.

“[A]fter today’s announcement, that analysis [Shearer’s a neoliberal] is beginning to look a little shaky. Unlike Labour’s poorly developed plan for affordable housing (offering houses that were neither affordable, nor available, to the Kiwis who needed them most) “NZ Power” is set to make a real and progressive difference to the lives of Labour’s people. If David Shearer’s persuaded his fractured caucus to get in behind a policy this good, then, surely, there’s a reasonable chance he’ll persuade them to get in behind others?”

On 18 April, that “reasonable chance” seemed worthy of a bet. So, putting aside a lifetime of bitter disappointments from the Labour Party, I once again put all my money on Red.

And then, as a further gesture of good-will “to friend and foe alike, in Labour’s fractious caucus”, I ran-up the white flag:

What a fool I was!

Two months on, and the hopes generated by the Labour-Green energy policy have well-and-truly dissipated.

It turned out that, far from being the product of close collegial collaboration between David Parker and Russel Norman, Labour’s and the Greens’ energy policies had been developed separately. It was only the prospect of the Greens releasing their plans ahead of its own that bounced Labour into authorising the joint announcement of 18 April.

As the full dimensions of NZ Power began to emerge, the hurried and ad-hoc nature of that crucial joint press conference quickly became evident. It had been so many years since Labour had released anything even remotely challenging to the neoliberal status-quo that nobody in the Leader’s Office had foreseen – let alone prepared Shearer – for the firestorm of criticism which erupted immediately from the Right.

Genuine leftists had grasped instantly the policy’s transgressive nature – it’s why they were so thrilled. At last!, they thought, Labour is pulling away from the neoliberal dock to which she has been moored since 1984. It simply never occurred to real social-democrats that the early announcement of Labour’s energy policy had been made in a spirit of tactical partisan one-upmanship; or that no clear thinking had been devoted to a) how the policy would be received, and b) how it would be defended, and c) how it fitted in to Labour’s emerging 2014 manifesto.

Grant Robertson’s statement of 24 April made everything much clearer. According to Grant the energy policy was a one-off, and the business community could rest easy that far from being the harbinger of Labour’s wholesale repudiation of neoliberal ideology, the energy policy was an aberration. No other deviations from the norm were planned, purred Robertson:

“Labour makes no apology for stepping in to fix problems in the electricity sector. But this is not a signal that Labour is going to intervene elsewhere in the economy. As we said on the day we launched NZ Power, we have no plans to intervene in any other markets.”

“As we said on the day”. With those six little words Robertson signaled to anyone who was paying attention that there were some in Labour’s caucus who most certainly had grasped the magnitude of the heresy that was NZ Power. But, far from welcoming it, these MPs were determined to quarantine it in a side-bar all of its own. This cautious little cabal (presumably led by Robertson) knew how contagious unchecked policy radicalism could be. They were not about to let it spread.

This need to calm things down, restore order, bring everything back under his control is crucial to understanding Robertson’s political style. At its core, the man’s political vision is one of quiet, efficient and, if possible, humane government management. In the Robertson playbook, change is something to be taken in small mouthfuls, well-chewed to ease digestion and avoid the risk of choking, and never in excessive quantities. It’s a Sir Humphrey vision: bureaucratic, paternalistic and, essentially, bi-partisan.

Within a fortnight of the energy policy’s release someone was briefing the Press Gallery that, from a practical perspective, NZ power wasn’t really doable. At least 18 months would be required for the drafting alone, and then there was the select committee process. Honestly, the whole project would likely take longer to put in place than the government’s three-year term of office. On winning power, whispered the briefer knowingly, Labour might decide that the NZ Power-game was no longer worth the candle.

But this was merely the illusion of control. Once out of its bottle, the genie of NZ Power could not be stuffed back in – for the very simple reason that the Right would not permit it. From the perspective of New Zealand’s neoliberal establishment, the Labour-Green energy policy was proof positive of its authors’ utter incapacity for responsible government. No matter how many reassurances Grant Robertson might scatter before their eyes, the truth of the matter was clear: the parties of the Left could never be trusted not turn feral and start eating the rich.

Had David Shearer been any kind of a real Labour leader he would have understood this intuitively and immediately – and he would have doubled-down on his party’s bet. If National, the business community and the right-wing news media were going to brand him anyway as some sort of North Korean communist, out to nationalize everything and shoot any bugger who complained, then he had very little to lose by going along for the ride.

New Zealanders are not natural radicals, but once persuaded that radical change is necessary and can no longer be avoided they can be very radical indeed. Roger Douglas and Richard Prebble understood this – and transformed their nation. Shearer showed a glimmer of understanding it when he held up the example of the Finnish prime minister, Esko Aho. Big change is better than little change, was what Shearer seemed to be saying. The problem was, none of those responsible for getting him the Leader’s job agreed.

Douglas and Prebble had the likes of Graham Scott and Bryce Wilkinson to rely on, Shearer had John Pagani, Fran Mold, Julian Robbins and Mike Smith. That wouldn’t have mattered if Shearer possessed the leadership qualities necessary to attract the sort of advisers he needed to succeed. But Shearer has never been that sort of man. He has always gone where he was sent, and worked with what he found there. Fine qualities in a UN troubleshooter. Massive drawbacks in a political leader.

That’s why he’s got to go. That’s why I’m un-surrendering.

It takes time to win that argument. Inevitably, there will be losses along the way. But when that sort of Labour leader does eventually win power, radical change happens.

The very worst thing a Labour leader can be is a winner who changes nothing.