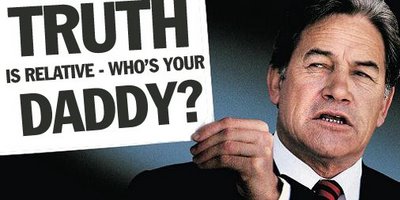 With Peter Dunne’s realization that he’s been set up as the fall guy in the GCSB leak scandal, he has himself come to question the unnoticed yet growing power of NZs Intelligence Industrial Complex and has decided to withhold his vote to allow the GCSB to legally spy on all of us meaning this has played masterfully into Winston Peter’s hands.

Winston has sensed that the Greens will not tolerate Labour using NZ First as a means to curtail Green political ambition. The Greens have been the scorned lover for far too long by Labour to put up with more political face slapping and Winston has signaled to National his willingness to negotiate on the GCSB legislation as a maneuvering to the right as the Government’s only viable coalition partner post 2014 election.

Winston knows he can get more out of John Key than he could out of Russel Norman and the haste with which Winston ran away from a possible three leader photo-shoot after the manufacturing crisis announcement speaks volumes.

Winston’s need to initiate the witch hunt against Dunne is driven out of the desire to kill off United Future as a possible coalition partner, it’s not from any moral or ethical conviction on the behalf of Winston.

NZ First voters can’t pretend a vote for Winston is a protest vote any longer, it’s a vote for John Key.