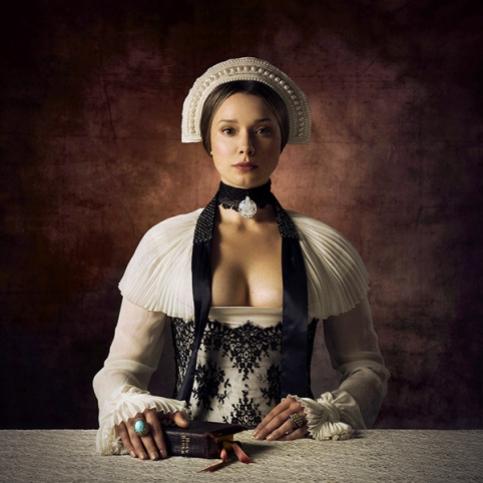 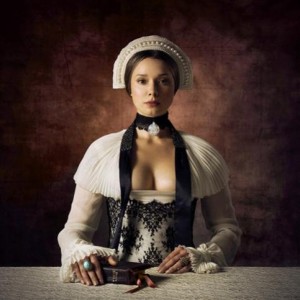 When I was 12 I did a project about Henry VIII’s wives for school because I was fascinated by the Tudor period. It was my definition of ‘history’. At 12 I didn’t really acknowledge other time periods. ‘History’ was corsets and castles and I think I loved the fact that there were so many interesting women. I sort of failed to realise that there were so many of them because their husband kept beheading them. Oops. Anyway, I’ve always had a curiosity about this period of time so was quite excited to head along last night to Q Theatre to see Anne Boleyn.

Howard Brenton’s play traces Anne’s relationship with Henry, from flirtation, through their 7 year courtship to the 2 weeks it took for her to be accused, tried and executed. There is a particular focus on Anne’s role in The Reformation. Henry of course established the Church of England whilst separating form Catholicism and removing himself and England out from under Rome’s control (so he could divorce Wife Number One, Catherine of Aragon and marry Anne). Anne’s story is intercut with King James I’s 70 years later as he grapples with church politics and begins the process of creating the King James Bible.

The play is interestingly styled. The set is barren- a slight rise in the centre with rust-coloured girders fanning up over the stage. It speaks of strength and the structures of power. It also leaves nothing to hide. We were in the seats placed on either side of the stage and didn’t feel like we missed a thing. The play was first staged at the Globe and feels quite natural set like this.

The costumes on the other hand are extravagant. King James wears a punk-esq purple tartan suit with black platform boots, the ladies dresses feel more rock ‘n’ roll that medieval and Henry wears maroon faux-fur. I wasn’t convinced at the time but on reflection think that avoiding period costume was necessary for the play’s accessibility. These costumes are symbolic and demonstrative and I think they work well.

The cast is superb and a great mix of old blood and new. Simon Prast is a terrifying as Cromwell and Andrew Grainger is a strong Henry. But, Anna Jullienne stole the show as Anne. She has such an expressive face that you don’t want to take your eyes off her as she swings between somber and coquettish. Steven Lovatt is electric as James and George Henare compliments him wonderfully as a delightfully dry Cecil. Jordan Mooney is impressive in his first main bill show with ATC, he is playful and fun as James’ lover.

Above all else, I enjoyed the richness given to the character of Anne. Often portrayed as misunderstood victim or seductive maybe-witch, she is instead given depth through the portrayal of her motivations and convictions. She is strong and driven  and actually highly likable. Very accessible and entertaining. Excellently executed (ba dum cha). Season closes on July 13th.