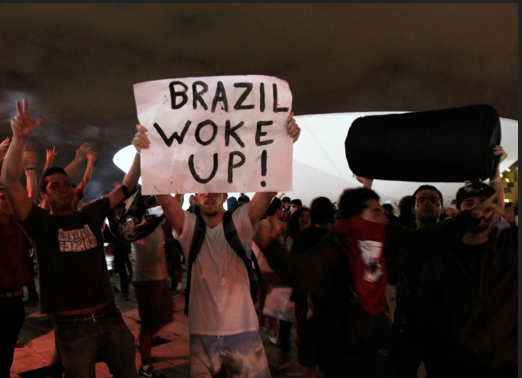 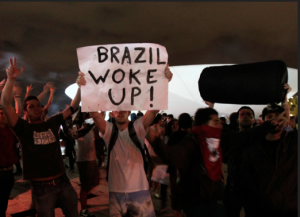 The revolts in Turkey and Brazil are truly inspirational. The Anglo-Saxon world seems to suffer too much acceptance of the status quo but I’m sure our day will come. The Occupy movement was a sign that maybe that won’t be too far away.

Like the Indignados in Spain a few years ago there is a an emerging broad challenge to that status quo. There is a desire to reclaim the power of being a citizen against the power of the 1% who seem to have captured official politics and the main parties of the right as well as the traditional social democrats.
People want “something different” but what that is seems elusive. Except for Greece it seems that even the radical left haven’t been able to capture the imagination of people or their confidence that they have the answer.

The metrolpolitan centres have grown into megacities of enormous complexity. Millions of people don’t have traditional jobs but exist in the pores and margins of society. The vast majority are excluded from any real decision making or power.

Part of the mass protests, the central square occupation etc have been “assemblies” to provide alternative directly democratic methods for engagement in politics and society by the excluded majority.

I continue to believe that the alternative that is instinctively being sought is some form of democratic, cooperative, socialist society. Given the problems the planet is facing nothing else makes sense.
But the traditional left from either the social democratic or Stalinist traditions have nothing to offer for this vision. Even the left social democrats share a “Statist” approach to politics which has the liberal do-gooders fixing things for the ignorant masses. They think politics is the State doing things for us rather than empowering people to do it for themselves. Stalinism is simply the most grotesque form of this type of politics.

A radical socialist vision today must include ways of empowering people today – not waiting until “after the revolution”. There will be no fundamental change in society until millions of people are engaged directly in challenging the system and building alternatives to the system in the here and now.
We must re-look at ways of organising communities that empower people to tackle problems in their daily struggle for existence. That must include worker cooperatives, community gardens, popular education, cultural and sporting programmes.

In New Zealand we are blessed with elements of this in embryo with the Maori marae. We can learn from Maori how to organise communally and locally.

If the Mana Movement has a say in the formation of the next government we could demand the government allow the creation of a communal council centred on a school or group of schools in an area – just as Act
got their charter schools implemented.

The school could become a marae with all the people in the area electing a communal council to run it. We would resource the council to have a community garden, community health centre, citizen advice bureau, legal aid services. It would have a threatre, a sports complex, gymnasium and swimming pool – open for the whole community. It would run night classes on whatever people wanted to learn about. Old people could volunteer as tutors in the school and help with the gardens. It could have a communal kitchen for teaching and producing meals for the school kids and the community. It would have childcare facilities and before school and after school care. We also need to explore developing worker cooperatives that can meet the needs of the community. A house building or renovating co-op would be a good place to start.

But we don’t need to wait for the government tor resource such initiatives. We need to be imaginative in doing whatever is possible in our neighborhoods, schools, universities and workplaces that empower and strengthen people at the grassroots. Look to the community gardens, Kohanga Reo’s and Playcentres of today for inspiration. Visit a marae!

People want to be part of a community. People want to contribute whatever skills they have to improving their community. Usually we never even meet our neighbours let alone get to know them.

We live an alienated existence. Everything is run as separate bureaucratic operation. Health care, education, housing, jobs, food production and consumption are disconnected from each other. This is the character of capitalist society which runs everything as a business that must return a profit to a private owner. But even state provided services mimic the capitalist model. But you can’t fix health without fixing housing. You can’t fix education without eliminating poverty.

Capitalist society is heading ultimately towards a social, economic, and ecological catastrophe for the planet. Ultimately we do need to replace it with a cooperatively owned, democratically controlled and planned economy so that human needs are placed before private profit. But we need steps that empower people in today’s society so people can develop a confidence in their ability to create a different sort of society.

This will include building unions as fighting organisations of working people. It will mean radically expanding union coverage amongst the 90% of private sector workers who don’t have unions. It will mean workers in the state sector challenging the bureaucratic, hierarchical organisation of their labour so they can deliver real services that people need and it will mean winning majorities in parliament committed to a programme of radical social change. But it will also mean looking at how we can create people’s power in the cities, towns, and villages that exist today.