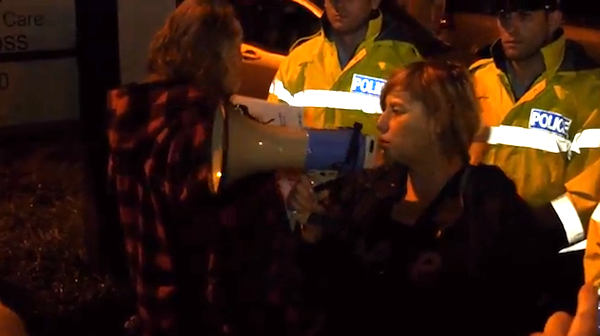 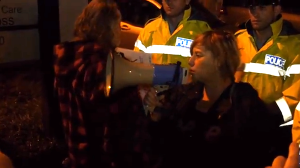 Last night around 30-40 of us braved a cold, dark winter’s night to hold a picket outside a ‘public’ meeting Paula Bennett was having in Henderson.

I use the word ‘public’ in the loosest of senses.

Only selected citizens were allowed through the substantial police cordon surrounding both entrances to Bennett’s electorate office where said meeting was being held.

Our group Auckland Action Against Poverty called the picket because we seek to use every opportunity available to expose the daily damage Bennett, Key and their mates are inflicting on unemployed people, beneficiaries, low wage workers and their families.

The meeting last night was billed as being about ‘safer communities’.

Well we reckon that Bennett herself is a far bigger threat to ordinary people in all our communities than any issues around increasing police numbers, street lighting, traffic flows and the other matters I suspect the citizens concerned with ‘safer communities’ may have been discussing.

National’s welfare reforms are literally destroying lives and hopes, with their ever deepening focus on forcing sole parents, the sick, the injured and the disabled to compete with the unemployed and underemployed for the same insecure, low wage jobs.

The harm done by the welfare reforms will be a far bigger cause of desperate poverty, crime, addictions, homelessness and family violence than any contribution a lack of street lighting or visible police on the streets might make.

So, there we were last night, doing our best to get our message across loud and clear to Ms Bennett and her few fans huddled inside.

No mainstream media were present. A short video of the protest is available here.

Meantime, inside Paula’s meeting, one member of the wider (ie non-National Party stooge) public discovered for himself just how safe a ‘safer communities’ meeting can really be when that party is in charge.

He was physically assaulted by four meeting attendees when he tried to support a motion being moved from the floor. Police stood idly by and watched the assault happen. Once it was over our friend was rapidly and uncomfortably ejected from the grounds by the men in blue. Kia ora e hoa – and I hope you’re doing OK this morning.

Auckland Action Against Poverty wasn’t the only group out protesting in our city yesterday.

Sick of having their former homes trucked out of the district late at night and of being made promises by Government officials that are rarely kept, the tenants let Nick Smith know exactly what they thought of the private developers’ paradise into which parts of GI are being converted.

Meanwhile, Brazil is going off.

Numbers on the street continued to grow. Some activists lit fires outside the legislative assembly, windows were smashed, and some entered the national congress building.

A Peoples’ Cup is being staged in a dilapidated community centre in Rio de Janeiro. Women’s and men’s football teams from favelas under threat of destruction are competing in a tournament aimed at highlighting the inequities involved in billions in state cash being spent on glamour sporting events while hundreds of thousands are rendered homeless and unemployed as a result.

I am watching Brazil with interest.

At last large portions of one country’s population are standing up to a regime determined to use the hosting of international sporting events to further an agenda of privatisation and profiteering on the backs of the most vulnerable. Private developers stand to make millions once the favela homes are removed, building housing for the wealthy in their place.

Sound familiar anyone? A bit like GI writ large, really.

Our protests here in Auckland yesterday were infinitesimal compared to what’s happening in Brazil, Turkey and many other cities around the world right now.

However, I reckon at heart our issues are the same, as are the forces we’re up against.
Let’s be inspired by the actions of our sisters and brothers in Rio and Brasilia and Taksim Square.
Let’s keep building our small groups and our small protests – gradually, gradually – as more and more of us here at home come to understand that only by taking action collectively – and staunchly – can we begin to have the smallest impact on what those people down there in Parliament are doing to us and our communities.