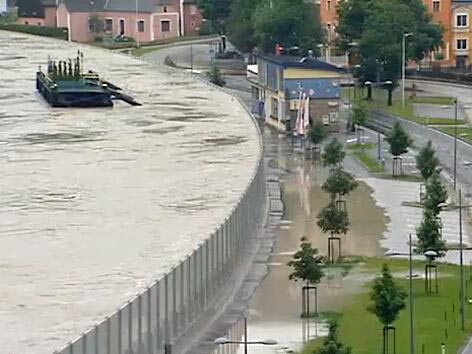 The mammoth floods spreading down the great rivers of central Europe are a potent reminder that rapid climate change is happening now.

Over the last couple of days of May and the first week of June, torrential rain — as much as half a metre in places — fell over much of the Austrian and German Alps. After a wet spring, the water quickly fed into the rivers that rise in these mountains, triggering floods on a massive scale. In Passau, on the German-Austrian border, a not-so-blue Danube reached levels not seen since 1501. To the north, the Saale in Halle reached the highest levels since records began 400 years ago. Historic floods have inundated large parts of Austria, Germany, the Czech Republic, Slovakia and Poland. The cost of damage in Germany alone could already be as much as US$7.9 billion.

In other parts of central Europe, the floods of August 2002 still hold the record. That was reckoned to be a one in a hundred year event. Now we have another 100 year, or perhaps 500 year event coming along only 11 years later. US meteorologist Jeff Masters is in no doubt about what’s going on:

If it seems like getting two 1-in-100 to 1-in-500 year floods in eleven years is a bit suspicious — well, it is. Those recurrence intervals are based on weather statistics from Earth’s former climate. We are now in a new climate regime with more heat and moisture in the atmosphere, combined with altered jet stream patterns, which makes major flooding disasters more likely in certain parts of the world, like Central Europe.

Back in April, I discussed how warming in the Arctic and the dramatic reduction in sea ice was beginning to affect northern hemisphere weather patterns. The jet stream, which normally guides storms quickly from west to east across Europe, has become prone to getting “stuck” in big loops. Weather systems get trapped in the loops, making extreme weather events — floods, heatwaves, cold outbreaks — more likely to happen.

This is an active area of research. Climate scientists are still teasing out the mechanisms that are driving the changes in the flow of weather around the northern hemisphere, but the fingerprints of warming are all over these floods. Stefan Rahmstorf, head of the Potsdam Climate Research Centre in Germany, is one of the scientists working on the issue. He blogged about it last week, and told Masters:

Planetary wave [jet stream] amplitudes have been very high in the last few weeks; we think this plays a role in the current German flooding event.

It’s still early summer in Europe and the Arctic, too early to say if the sea ice is going to melt away to a new record low in September, but the effects of warming in the far North are already being felt thousands of kilometres to the south. How much worse will it get as the ice continues to disappear over the next few years? And just what will it take to get the politicians of the world to pay attention and start urgently cutting carbon emissions? How much economic damage? How many deaths?