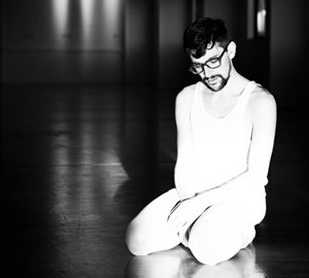 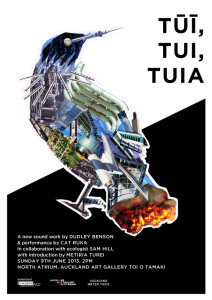 I was transported from the moment Metiria talked of hearing Dudley Benson in the Oratia Settlers hall.  Ahh yes, you can take the girl out of the west….. But if Dudley ever appears there again I hope I am fortunate enough to be there for the experience.  And that was just the introduction.  What we were treated to next was a most beautiful and extraordinary transporting out of central Auckland.  We heard Tui and Tīrairaka song and flight through the unique talent and voice of Dudley Benson in his rendition of Hirini Melbourne songs.  Tūī, Tui, Tuia continued with the stunningly beautiful and evocative performance art of Cat Ruka.  She, like Dudley, was Tui; with subtle movements that spoke of, surely, hours of observation.   And then, silently, she left, she was gone.   The goneness, for me, was the message.  She left and didn’t return and it left me to ponder the risks that exist for our beautiful native fauna because they too could slip silently away and leave that emptiness.

The hours of Tui song collected for this project from many conservation sites near Auckland were engineered into a sound performance that was very ‘now’, yet timeless and quintessentially Aotearoa.   As a venue, the kauri canopy of the art gallery is something of a treasure.  It was a beautiful space of light to view the performance under the trees of Albert Park in sunlit autumn rain.   Tui tui tuia was seamlessly produced with a light hand by Paul Mackenzie, with tui expertise provided by ecologist Sam Hill.  For those of you who, alas, missed this one-off performance,  I strongly recommend you get down to the Silo Park during the 10 days that the sound installation of Tūī, Tui, Tuia will be playing there as part of Matariki celebrations, and soak in the magic:    12th to 21st July – not to be missed!