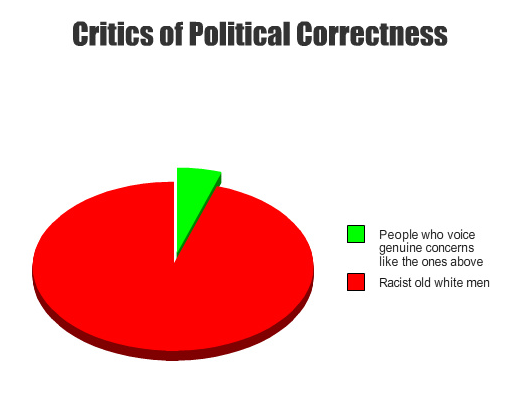 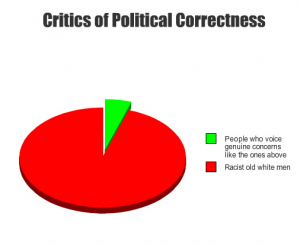 I’m sick of everyone complaining that New Zealand is becoming too ‘PC’.

These days it seems as if anyone who calls someone out on being rude, they are criticised for being too PC or unable to take a joke. Well, I’m here to inform everyone that I actually can take a joke. I even make a few jokes of my own from time to time. But there is a difference between making a joke and being disrespectful, offensive and derogatory.

Anyway, where does that argument come from? How can you be ‘too’ politically correct? What does it even mean to be ‘politically correct’ and why / how is this a bad thing? This is a serious question. I’m genuinely trying to understand the dynamics of this oh-so-tolerant society of ours.

From what I can gather from recent events, being offended by racist cartoons is too politically correct and therefore a bad thing.

Ok, that makes sense. It really doesn’t matter that the people for whom these terms are referred to associate these words with inferiority, marginalisation and being spoken to in a patronising and sub-human way. Why did these words go out of fashion in the first place? Why don’t we just go back to how it was 50 years ago? Personally, I have no problem being branded a curry-munching retarded woman who can’t leave my home.

During the 2012 Euro Cup in Poland a group of hooligans were monkey-chanting the Dutch squad. And then of course Eddie McGuire said that the Aboriginal AFL player Adam Goodes would be a good person to promote King Kong. Is this meant to be a joke? Am I meant to laugh at these two incidences knowing the history behind the association between indigenous populations and monkeys? If I don’t find it funny, does that mean I’m too serious and too PC?

All I can gather is that ‘political correctness’ is the same as humanism. It’s about being respectful towards all people. I don’t find racial profiling a joke, or any type of profiling or stereotyping for that matter. And because it’s about the fundamental core of being human, there is no way it can be subjective either so Mr Key, your argument is invalid.

To say that this Marlborough Express cartoon is a ‘joke’ is to say that it’s perfectly acceptable to assume that all Maori and Pasifika parents are scam artists who only care about booze, smokes and pokies and couldn’t care less about their children. Caring for others, especially your young is a fundamental instinct of all animals including humans. So when you say Maori and Pasifika don’t care about their young, what exactly are you implying?

Call me the Fun Police if you wish but how exactly am I supposed to laugh at that? Am I being too PC by saying that Maori and Pasifika are in fact, human?