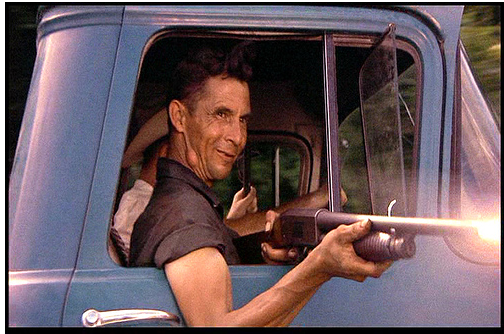 IT’S ONE OF THE MOST MEMORABLE SCENES in American cinema. Wyatt (Peter Fonda) and Billy (Dennis Hopper) are cruising innocently along a straight stretch of blacktop in the Deep South of the United States when they are overtaken by a battered pick-up truck. “Why don’t you get a haircut?” taunts the gat-toothed, slack-jawed, southern man sitting in the passenger seat. Billy gives the shotgun-totin’ redneck the finger and is shot in the chest at point-blank range. As Wyatt roars away to get help, he too is gunned down. The pick-up truck drives on down the highway as Wyatt’s bike burns and the credits roll.

The tag line for the cult 60s classic, Easy Rider, read, simply: “A man went looking for America and couldn’t find it … anywhere.” It is hard to tell, so many years after the film was made, whether the irony of this claim was accidental or deliberate. Because Wyatt most certainly did find America – it just wasn’t the America he was looking for.

Easy Rider was an instant hit with student activists and hippy drop-outs because, unlike the implausibly innocent drug-courier, Wyatt, they knew America had gone to the bad. In the five years prior to the movie’s release young Americans had witnessed the murder of civil rights activists in Mississippi, race riots in Newark and Detroit, the assassination of Dr Martin Luther King and Senator Bobby Kennedy, a massive military escalation in Vietnam and the election of Richard Nixon. They understood what Billy refused to accept: that giving the finger to redneck America could get you killed.

Those who line up proudly with the progressive combatants in America’s “culture wars” should bear in mind that it was the so-called “Love Generation” – whose ideals and prejudices informed cult classics like Easy Rider and Billy Jack – who started them.

Ordinary Americans had real difficulty in understanding why Wyatt and Billy – whose ill-fated road-trip was funded by a cocaine-smuggling expedition from Mexico to Los Angeles – should be regarded as heroes at all. Nor did they recognise themselves in director Dennis Hopper’s crude caricature of the America beyond Greenwich Village, Haight Ashbury and the Hollywood Hills.

Not every Southerner’s first reaction to a long-haired biker was to attack him with a shotgun. Watching Lynyrd Skynyrd sing Sweet Home Alabama to thousands of long-haired Southern Men amply confirms that hirsuteness was more than just a Northern affectation. Nor was every hippy commune dedicated to peace and love. The year Easy Rider was released, 1969, was also the year the “Manson Family” went on its murderous killing-spree in Los Angeles.

Towards the end of Easy Rider, the script has George Hanson (Jack Nicholson) an alcoholic lawyer and card-carrying member of the American Civil Liberties Union say: “You know this used to be a hell of a good country, I don’t understand what’s goin’ on with it.”

And that, really, is the point. Unlike the genuine chroniclers of the American experience – social historians like Studs Terkel, and Howard Zinn – the “counter-cultural” critics of “Amerika” did not understand what was “goin’ on with it”. All they knew was that a great deal of it was wrong, wrong, wrong. So, all those who refused to accept that they, the dissidents, were right, right, right must be the enemy. The inherited dispositions of, and the mitigating influences attributable to, one’s age, class, race, gender, religious convictions, regional loyalties and (most important of all) personal experiences, were no excuse for failing to recognise the essential rightness of the progressive credo.

Progressive Americans weren’t alone in adopting this holier than thou, if you’re not with us, you’re against us, approach to social and political issues. In New Zealand, too, the Left’s acute awareness of being in the minority on a broad range of political issues, and the social isolation it fostered, could hardly fail, given the fierce strength of their convictions, to encourage an “us and them” mindset.

This sense of alienation; of not being part of “mainstream” New Zealand; was made even more intense by the emphatic rejection of the Kirk-Rowling Labour Government in 1975. The election of Rob Muldoon hit the progressive members of the baby-boom generation with the force of a redneck’s shotgun.

Looking back over that period in 1997 I wrote:

“I did not play the Godwit in my youth. Before going to university I wanted to get to know New Zealand and New Zealanders. Such choices were easier then. The papers bulged with job vacancies and money was easy to get. For three years I worked at a multitude of jobs – trying everything from factory work to script-writing. In between the city jobs I hitch-hiked along sun-baked highways, rode trains along rain-swept coastlines, and crunched the gravel of empty country roads. And everywhere I travelled, I chatted, joked and argued with my fellow citizens; hearing their hopes and their fears, their prejudices and their premonitions ….. I had heard the working-class kids I went to school with cheering Rob Muldoon in the Upper Hutt Mall and watched them sneer at the Labour Party hecklers who carried aloft placards proclaiming Labour’s intention to “Build a New Society”. My old schoolmates wanted a new society too – but not the one Labour was contemplating.”

How much has really changed, I wonder. In the week that Russel Norman compared John Key to Rob Muldoon and Al Nisbert flicked the blind on the unreconstructed private racism of so many New Zealanders, should the Left be asking itself: “Are we still the embattled little island of progressivism amidst a sea of raging social conservatism that we took ourselves to be forty years ago?”

Did the nine years of Helen Clark’s government, and all the pent-up progressivism unleashed by Labour, the Alliance and the Greens between 1999 and 2008, lull the New Zealand Left – particularly its younger members – into believing that all the big battles against racism, sexism and homophobia have been won?

What if we’re wrong? What if the only battle we won was the battle to suppress the expression of ideas we don’t like to hear? What if, beneath that enforced silence, all the poisons in the New Zealand swamp continue to steam and bubble?

What if all the Right is waiting for is a pick-up truck?