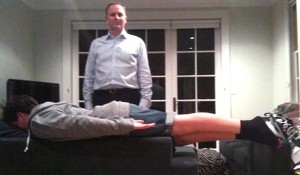 A couple of months ago I wrote about the dangerous implications for democracy of having a Prime Minister who treated his job with all the dignity and gravitas of a drunk old uncle at a family wedding. The flow on effect of this is that the population at large stop taking politics seriously, no longer bother engaging with it and switch off altogether. With voter turnout already at historic lows, all of this makes it even more of an uphill struggle to convince the electorate to turn out and vote. You can talk about democratic responsibilities, and how oppressed people worldwide have, and do, die fighting for the right so many of us ignore, but when the Prime Minister turns the Beehive into the Big Top, you can see why people start to lose interest in buying a ticket. If you’ve seen one strongman, you’ve seen them all.

The line of defence around John Key’s flippant one liners is usually to dismiss the criticism of them. It’s built on the image of bed-wetting PC liberals getting all precious and throwing their toys. They’re just patronising pointy-heads who don’t think New Zealanders know when someone’s just having a bit of a laugh. The real problem isn’t what Key says, base and offensive as it often is, it is the signal that his turn of phrase is okay. He normalises casual bigotry in a dog whistle to his reactionary support base, as cynical and crude a form of electioneering as you could find. The real problem is he legitimises the same behaviour for people who are less self aware, who may be young and impressionable, moving in circles made up of the young and the vulnerable. The PM’s comments about a rural radio hosts Gay Red Shirt may be laughed off by sympathetic pundits, but that is harder to do if you’re a kid questioning your sexuality, being harassed at school by bullies whose hurtful (hateful) actions have just been endorsed by John Key. It’s harder to teach kids that making racist jokes about our Maori friends is not okay when Key’s on the 6 O’Clock News telling jokes about Tuhoe being cannibals.

In the tightly controlled and focus grouped world Key moves in, he might even manage to justify it, but the real damage is done when our still ongoing struggles against sexism, racism, homophobia and intolerance are made even harder than they need to be so he can pick up a point or two in some preferred Prime Minister poll.

You needn’t look any further than the National Caucus to see this race to the gutter in action. Key, Joyce et al have been attacking the Opposition with a sneer of late, the passion in their voice inverse to the evidence in their arguments. This ramped up approach was best exemplified in the standing ovation Key’s fawning colleagues gave him for referring to the potential Green / Labour Government as the Devil Beast. The Devil Beast?! This is our leader at home and our representative abroad, getting all Old Testament in our House of Representatives. Except this time there was no fauxpology, no attempt to spin it out wide, it was left to do what it was meant to do – whip up a frenzy irrational hatred of an opposing ideology.

Tau Henare, the West Side Tory & National Party List MP, really took to the Devil Beast metaphor, and seems determined to run with it. This morning, his prolific (often insightful, occasionally hilarious) Twitter account pumped out this: “Heading off to do more battle with [sic] the #devilbeast a la #NormanShearer #ShearerNorman”. Like a good wee foot soldier, there he was pumping out his bosses meme. The response he got from one online citizen, that Henare then re-tweeted, was a little more jarring:

Now, I am not foolish enough to think that by re-tweeting a message someone is endorsing it. I don’t feel like you need to state that as a disclaimer, but I thought I would give Tau Henare the benefit of asking him directly: was he endorsing the message that Green Party Co-Leader Russel Norman was equivalent to David Koresh? That the Opposition were a cult of Branch Davidian proportions? Surely not! 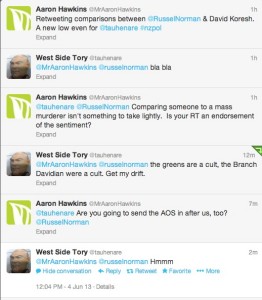 Firstly, I will admit that calling David Koresh a mass murderer is pretty extreme on my part – it would be wrong to blame him entirely for the 76 people who died in the siege, but the actions and strategies of the ATF certainly weren’t coming from a harm minimisation standpoint either. But suggesting Dr Norman was a misogynist gun nut living in survivalist compound, entitled to 140 wives? That he was the kind of guy who would enter a race to exhume a human corpse? To, even in jest, suggest he would turn the Armed Offenders Squad on the Green Party membership? This is a political discourse barrel scraper of the lowest order. It is offensive, and it is extreme, not just to those who it is aimed at, but to anyone who takes the running of their country seriously, regardless of their political stripe. It is more dangerous still as a step in the devolution of discourse. If it can go from Devil Beast to David Koresh by the time it reaches the back of the debating chamber, one shudders to think how the ripple effects of this will be felt in the wastelands of talkback radio. We can’t hold politicians accountable for the calibre of discussion taking place on Radio Live, but we should be able to expect them to lead by example, and not whip the electorate into a reactionary frenzy. The Prime Minister may try and paint himself as your Average Kiwi Bloke, but the reality is we expect, and deserve, better conduct from him than that.

On a similar note, it is worth everyone seeing the entrenched chauvinism of our Parliament in action. Women are sadly under represented in our House of Representatives, and the sexist culture that exists there is one of the main reasons it is difficult to find strong women prepared to put themselves through it. In response to Green Party Co-Leader Metiria Turei’s empassioned opposition to Charter Schools, John Banks fired off derogatory statements about her position and her appearance. Points of Order were raised by Ms Turei and her colleague Denise Roche, but Eric Roy, in the Chair, called Banks’ behaviour perfectly acceptable and let him proceed. Another infuriating victory for the draconian Old Boys Club. Enjoy.