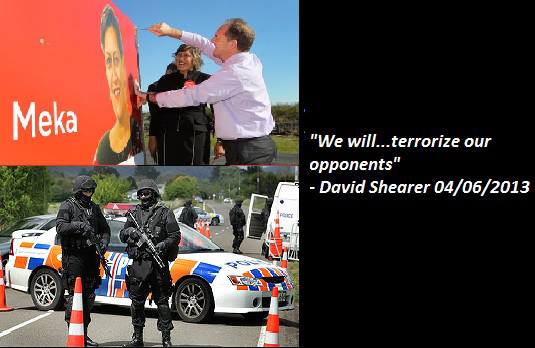 “Labour will campaign relentlessly to once again earn the trust of the people of Ikaroa-Rawhiti. We will organise, mobilise and terrorise our political opponents.

Normally I would be all in favour of Labour terrorizing their opponents. To see John Key and his front bench frightened of something that isn’t being conducted internally by Simon Lusk and Cameron Slater would be a first, but in the Ikaroa-Rawhiti by-election, Labour are fighting the Greens, MANA and the Maori Party.

I don’t think terrorize was the word they were really looking for was it?

If we want to check the record on terror however, it does show that Labour has a recent history record for terrorizing Maori.

-2004 Labour pass the largest confiscation of Maori land with the Foreshore and Seabed.
-2007 The terribly flawed, expensive and illegal detentions of the Tuhoe Raids happen under Labour.
-2012 David Shearer says Maori don’t own water.

…what Labour needs now is Parekura Horomia to rescue them from this gaffe, sadly he’s left them.

The use of ‘terrorize’ as the word to describe how Labour plan to fight the by-election must be a mistake and the worst strategic blunder since Rodney Hide said to David Garrett, “Hey, wanna be an MP?”.

The real danger for Labour is that the rising star of Marama Davidson is attracting educated female Labour Party voters at the speed of light. Marama’s incredible performance on Native Affairs will force every Labour Party voter to ask, ‘why are we voting for the boring candidate again’?

With the issues swirling around how Meka’s brother cast a vote for her successful candidacy still annoying enough within Labour to keep leaking,

I predict that every other candidate will open every speech with, ‘Unlike the Labour Party, we are not here to terrorize you’.

Astounding mis-step from a mainstream party.