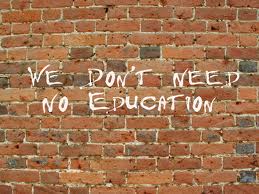 And so it comes to pass, Charter Schools brought into effect and finally acknowledgment that Christchurch will bear the brunt of this free market educational experiment.

How a far right fantasy from a Party that only attained 1% in the last election can be seriously foisted upon the entire education sector with almost zero buy in from most stake holders suggests an ideological stormtrooper approach as opposed to a good idea that all wish to embrace.

That Charter Schools will operate in near secrecy doesn’t help quell concerns that the Government want to hide any problems that might undermine the process.

When our Associate Minister of Education is on record saying…

“If we continue the bankrupt response of just paying young Polynesian, young Maori men in south Auckland the dole to sit in front of TV, smoke marijuana, watch pornography and plan more drug offending and more burglaries, then we’re going to have them coming through our windows”.

…I’m really not convinced this is the kind of person we want any where near education.

With the Education Ministry slated over their Novopay incompetence…

Two senior staff at the ministry are under investigation over advice they gave to Cabinet ministers Hekia Parata, Bill English and Craig Foss recommending they approve Novopay.

The report found the readiness of Novopay was misrepresented in two ways – saying a rollout decision was supported by three members of the ministry’s information and communications technology council and it stated other key criteria had been met, which was false.

…the Government is losing credibility faster than karma can bite Hekia in the bum.

Why are we allowing our education sector to be so ruined? We have one of the best public education systems in the world, yes we have students on the bottom who are not getting the education they need, but that’s because of under funding, growing class sizes and manipulating the flawed national standards system into a performance pay measure that has nothing to do with making education better.

This is far right ideology replacing public policy and we are all responsible for its failure.